As far i understand existential import Aristotelian point of view universal statements should talk about things that are exist , But Boolean point of view say that we can talk about any thing . OK ?
But from both standpoints the word some implies existence .
so how they Treat the statement "some unicorns are red"
and why Boole make different standpoint of view in universal statements and keep particular the same as Aristotle ?
and by Boolean standpoint
All s are p = No member of s are outside p .
No s are p = No member of s are inside p .
and Venn diagrams will look like this 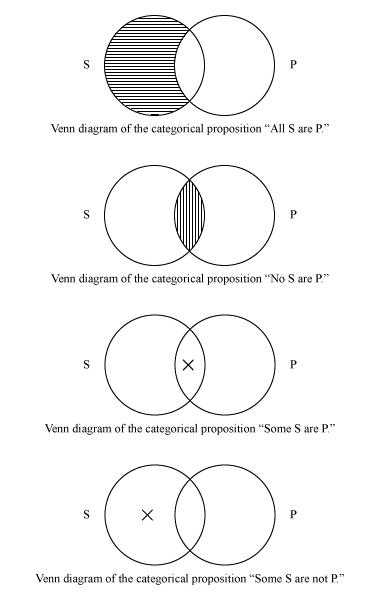 But How they will look like in Aristotelian point of view ?

then by existential import they make modern square of opposition
and only relation is contradictory i can understand why sub-alternation is
removed but i can't understand why another relation removed (sub-contrary ,
contrary )?

This convention has to do with Boole's insight that representing True as 1 and False as zero, you can see and as a form of multiplication and or as a form of addition (in binary discarding the carry).

It makes the math work out better if the default value for multiplication is 1, meaning that the product of zero things is 1 by default. That way the product of n things is always the n-th one times the product of its predecessors, even when there aren't any predecessors. This simplifies various common proofs by induction and remove special cases from many famous theorems. The result is so convenient that it is the convention throughout math, including in Boole's artificial interpretation of conjunction as multiplication.

Then, to make universal quantification look just like infinite products of zeros and ones, it works out best if "Is this true of all zero of these things" is answered True, the equivalent of 1 and not with the more obvious False. It doesn't, in fact, matter, because if you wanted to act on this fact, it would tell you something only about nothing. And discussions of the properties of nothing are already conflict-ridden jokes.

The sum of zero things is already more obviously zero.

"Some unicorns are red" means the same thing for both the classical and Boolean cases. It implies there is a red unicorn. The two agree here, because 'Some' is an extension of 'or' and not 'and'. Something is true of some things if it is true of one or another of them.

Not the answer you're looking for? Browse other questions tagged logic aristotle or ask your own question.

5
A strange generalization of the square of opposition?
3
In modern logic, why does “All S is P” contradict “Some S is not P”?
3
Individual/Universal Concepts: What does Popper mean in section 14 of Logic of Scientific Discovery?
2
Existential quantifier proof help
5
Square of Opposition with percentages?
8
Existential import: in logic, do propositions default to true or false when objects in them do not exist?
1
Existential Quantifiers and Modal Logic
1
Existential Import
0
Aristotelean obversion: not vs non-