logical fallacy: X is not wrong, if you have done X 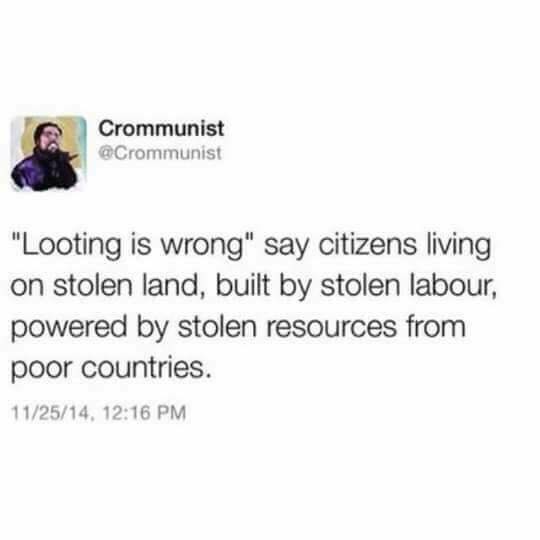 So it sounds like her argument is that because citizens live on stolen land, built by stolen labour, powered by stolen resources from poor countries, looting is not wrong?

The structure of this statement feels flawed, but I don't know enough about fallacies to pinpoint which fallacy it is, if indeed that's the case. I've been searching around and can't place it.

Can someone please point me in the right direction? Thanks.

As a U.S. citizen, I live on stolen land, built by stolen labour, powered by stolen resources from poor countries - but not necessarily by choice. I just happened to be born in a land characterized by those problems. I can do what I can to fight those problems, but my chances of beating the system aren't great.

However, I can choose not to loot.

The comparison is therefore invalid.

Whether the person who posted this was comparing apples and oranges depends on the context. Judging by the excerpt you posted, it sounds kind of lame. However, they may have posted it to point out a particular injustice or hypocrisy.

It's reminiscent of the photos of Native Americans accompanied by captions that read something like "And you think MEXICANS are illegal aliens?"

The photo and caption point out a major hypocrisy, but it may not make much sense unless you associate it with the proper people, in the right context.

Accumulation was probably correct in identifying it as a tu quoque fallacy. However, we aren't necessarily talking about a situation involving two wrongs. There are multiple wrongs, but I never owned slaves or fought Native Americans, and I have long spoken out against U.S. imperialism, so I don't feel like anyone is pointing a finger at me.

It's in the family of tu quoque. It's especially fallacious as, unlike the standard tu quoque, the target didn't perform the acts, just benefits from them. So it has elements of whatsaboutism and Two Wrongs Make a Right. There's also equivocation between looting, which is taking property in violation of a well-established legal system, versus "theft" being used in a more metaphorical sense of behavior that the writer subjectively feels is "unfair".

logical fallacy: X is not wrong, if you have done X

Technically the statement is saying that the listener's actions form the standard of right and wrong. Action X is right, or at least it is not wrong, because the listener does the same thing.

In its own backwards way, this argument is an appeal to authority; here, the authority is not a third party, but the listener themselves. The listen presumably agrees with their own values.

Also, as pointed out in other answers, the argument is plain old tu quoque. Yeah, maybe Action X is wrong, but all of that is beside the point because the listener does it, too. The response just evades the question.

If this form of argument were banished from cable news programs, a lot of panel discussions would have to fold. Or maybe address issues directly.

I am not sure I would say there is a fallacy here.

The message I get from the statement is that there is equal wrong doing here not a comparison of which is right. The statement suggests all of the acts are equally wrong. So how can you single out one act as wrong and not the others.