In basic logic, if an argument contains a self-contradictory premise, how come the argument is valid?

I have started to attend the logic lectures. The lecture notes indicate that a "self-contradiction" is a statement that is always false.

But why will it lead to a valid statement?

Your question at least on a quick reading seems to be using terms a bit willy nilly. Let's start by defining terms.

Statement - a claim that can be either true or false.

We also need to be a bit careful about the "can be" in the definition. Here, it means something like "capable of being evaluated to either true or false" -- my point being that it's possible a statement is always true (e.g. A or not A) or always false (e.g. A and not A), but the point is that statements don't include things that don't have a "truth-value."

Self-contradictory - I assume this something that posits both A and not A.

Valid - this means that an argument would have a true conclusion were all the premises to be true.

Another term related to validity is "truth-preserving." This is the idea that an argument's premises truth can be carried onto the conclusion.

In your question you speak as if a statement can be valid or invalid. This is not true in logic. Statements can be well-formed or not. A well-formed statement is one that can be evaluated unambiguously. Any statement that follows the rules of the syntax is a well-formed formula -- not statement is valid because validity is not about statements.

You also speak of a self-contradictory premise. This might make sense, but more commonly this happens with an argument as a whole rather than a single premise.

To understand why an argument is valid if it has self-contradictory premises, we just need to think through the definition of validity a bit. I will repeat it in pieces:

An argument is valid if and only if it is the case that when the premises are true, the conclusion must be true.

This is often thought of it in a backwards way in the sort of introductory logic and critical thinking classes that exist. In other words,

an argument is valid just so long as there is no case where the premises could be true and the conclusion false.

(In some types of logic, the definition of validity is different than this, but those types are never taught in introductory logic classes in philosophy)

Thus, any such argument is valid on this definition of validity.

I think you're talking about a material implication, which has the form of "if A then B", where A and B are propositions. This statement is false if and only if both A is true and B is false, or "A and ~B". The negation of this is ~(A and ~B) which is logically equivalent to (~A or B). It then follows that the statement "if A then B" is logically equivalent to (~A or B).

The fact you can obtain truth from falsity is counterintuitive, so I propose you look at material implications as promises.

Let A be "You work for me" and B be "I will pay you". The promise then says

"If you work for me then I will pay you".

Then our analogy that the promise holds even when you didn't work for me translates into the fact that a material implication can be true even when the premise/precedent/antecedent is false, or even a contradiction. This implies that the statement "If penguins can fly then there is no gravity on planet earth" is true.

I hope my answer wasn't too convoluted.

The authors of forall x give this definition of validity (page 8):

An argument is valid if and only if it is impossible for all of the premises to be true and the conclusion false.

They also refer to this as "validity in virtue of form" (page 21):

Consider the sentence, "It is raining." The negation of this sentence could be written as "It is not the case that it is raining." Let us symbolize "It is raining" with "P". Then its negation would be "¬P". A self-contradictory sentence built from these two would be "P ∧ ¬P", that is, both "P" and "¬P".

Using this as a premise can we construct a valid in virtue of form argument? Yes, we can. Here is an example where I am trying to show that "P ∧ ¬P" implies "P".

The first line is the premise. I get the second line by using the conjunction elimination rule (∧E) which allows me to use either side of the conjunction (∧) in my argument. It turns out what I used, "P", was what I wanted to show and so the proof checker verified that I reached my goal.

With a little more work, I can show that anything whatsoever follows from a self-contradictory premise. Let "Q" be the symbolization for anything whatsoever. This example shows that I can construct a valid in virtue of form argument for "Q": 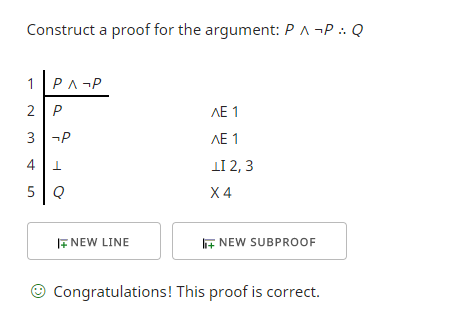 The first line contained the self-contradictory premise as in the previous example.

On lines 2 and 3 I used conjunction elimination (∧E) to both sides of the premise (line 1) to place these on separate lines.

Once I have them on separate lines, I can use the rule of contradiction introduction (⊥I) to note on line 4 that I have a contradiction (⊥).

For more details on these rules, see Chapter 15 "Basic Rules for TFL" in forall x.

Not the answer you're looking for? Browse other questions tagged logic validity or ask your own question.

7
Why are conditionals with false antecedents considered true?

4
Is Vallicella's argument that the future tense cannot generate the Liar paradox valid?
5
In formal logic, how is it possible for an argument with a contradictory conclusion to be valid?
1
Is this argument valid without premise 1.1?
1
The validity of the definition of a valid argument
2
Is the logic of this argument valid?
2
Can Deduction for a Valid Argument produce the wrong conclusion?
4
If the premises of an argument CANNOT all be true, then said argument is valid
3
Concerning the definition of “valid”
0
How is “~A. Therefore A -> B” a valid argument?
0
Is this argument about the disjuncive syllogism valid and sound?