What is the difference between a logical truth and a tautology?

Some papers I read seem to be referring to a distinction between logical truths and tautologies.

At first I thought something was wrong since I thought they are the same by definition. I checked the Wikipedia article, "Logical truth", and I noticed that it, too, refers to a distinction between them when it says, "Logical truths (including tautologies)", but I still do not understand what the difference is.

Are both of them not simply statements that are necessarily true?

As Conifold pointed out in a comment quoting the Wikipedia article cited by the OP, the difference between logical truth and tautology may be described as saying a logical truth "turns out to be true under any possible interpretation of its terms" while a tautology may be limited to "truth-function tautologies".

That Wikipedia article states the following:

Logical truths (including tautologies) are truths which are considered to be necessarily true.

On page 13, the authors illustrate necessary truth with this English language sentence:

Either it is raining here, or it is not.

You do not need to look outside to know that it is true. Regardless of what the weather is like, it is either raining or it is not. That is a NECESSARY TRUTH.

Tautologies are defined for truth-function logic (TFL) or propositional logic. They write (page 70)

One can think of a tautology as a truth dependent only on logical connectives such as "and", "or" and "not" between sentences.

An FOL sentence A is a LOGICAL TRUTH if A is true in every interpretation.

I was quite confused when I read in Carnap's "Introduction to Symbolic Logic and its Applications" (in chapter A section 5) all tautologies are L-true but many L-true sentences are not tautologies. He referenced chapter A section 14, but does not there explicitly say "here is an L-true sentence, yet it is not a tautology". This discussion has clarified that this is not a profound, subtle logical distinction. If tautology is defined to be a necessary truth which can be established by a finite number of rows in a truth table then L-true statements with a universal quantifier and infinite number of individuals is L-true but not a tautology. If tautology just means true for all (not necessarily finite) assignments to value bearing signs, then they appear to be the same thing. Nothing profound here. When Carnap wrote, examples were not appreciated.

I am following along the course "Language, Proof, and Logic" from Stanford on EdX.

I was confused by the question of the distinction between tautology and logical truth (aka logical necessity).

One particular explanation from a lecture, and then a lecture from the textbook cleared up a lot for.

I'm going to try to give some intuitive ideas here, that may be vague in certain respects (because I am not an expert in logic), but which helped me to understand the distinctions of the terms we are discussing.

An object not being identical to itself is not, however, logically possible. This would violate the meaning of identity, which is part of some basic axiom of logic.

Consider the (atomic) sentence a=a. If we build a truth table for this atomic sentence, it has two rows, one for T and one for T.

However, it is not logically possible for a=a. Therefore, despite not being a tautology, a=a is a logical truth, aka a logical necessity.

Finally, let me show the diagram. The diagram includes some information which is specific to the course, in particular this thing called "Tarski's World". You can ignore it for the purposes of this discussion. You also don't have to know what the predicate Tet() is. The important thing is that any claim of the form P & ~P is a tautology. 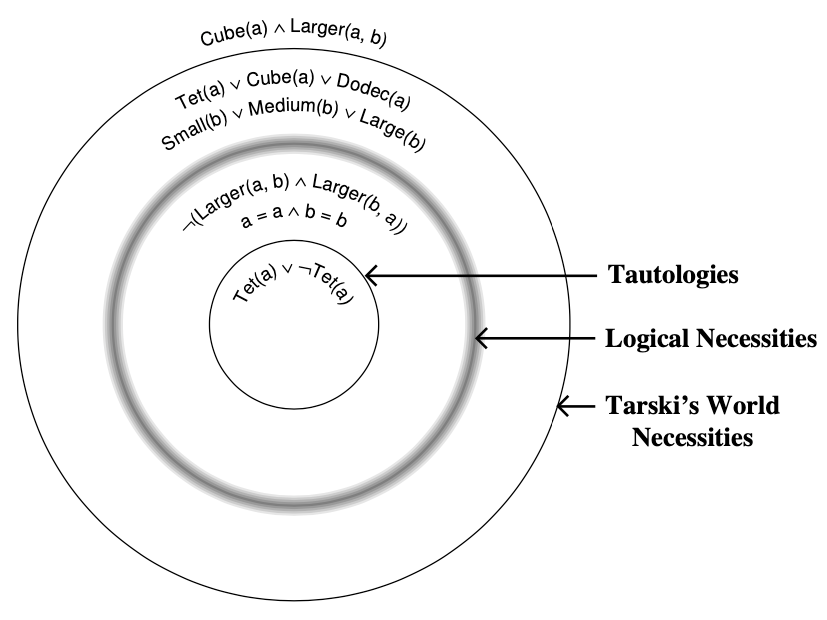 Seems like a tautology is a claim that is true for whatever configuration of the atomic sentences it is composed of, and this means that the actual structure of the claim makes it so.

However, there are structures of claims that when you build out the truth table you see that the claim isn't true in all configurations. However, there is some other stronger constraint on what is possible than just the structure of the connectives of the claim. Such a stronger constraint is, for example, what I am conjecturing to be fundamental axioms/laws of logic.

This is what is exemplified by a=a or, as in the diagram above, also something like ~(Larger(a,b) & Larger(b,a)). If we were to use some other predicate instead of Larger(), we might get something which weren't a logical necessity. For example ~(Likes(a,b) & Likes(b,a)). It is totally conceivable that a likes b and b likes a, making the whole claim false. But it is not possible for b to be larger than a, and a to be larger than b. This particular predicate is admittedly very vague, and maybe there is some esoteric field which allows two objects to each be bigger than the other. If a and b represent physical objects, I believe it would probably be justified to say that if Larger means having more mass, then the claim in question, ~(Larger(a,b) & Larger(b,a)), is a logical truth.

In the Aristotelian tradition, a logical truth is an implication which is self-evidently true, such as for example the modus ponens, transposition, the hypothetical syllogism, or even more basic implications such as A ∧ B ⊢ B and A ⊢ A ∨ B, and indeed A ⊢ A.

Thus, logical truths are not identified through formal proofs but through our innate logical intuition, which is still our only means of justifying any logical deduction.

Tautologies is something else entirely. A tautology is defined as any logical expression (not necessarily an implication), which is true in all logical cases. For example, A ∨ ¬A is trivially true in all cases, so it is a tautology.

It became necessary to introduce the notion of tautology in mathematical logic because of its use of the material implication as proxy for the logical implication.

Intuitively a logical truth and a tautology are more or less the same thing. However, in modern logic they have become distinguished:

A logic is a language with a set of axioms and a deductive system. A logical truth is a sentence that can be deduced via the deductive system starting out from the axioms.

A model of a logic is a world where we can interpret the logic. Sometimes this is called semantics as opposed to the syntax of the logic. Then a tautology is defined to a sentence that is true in every possible model.

Sometimes tautologies or logical truths are dismissed as being empty of content as they are merely deductively true. This is of course correct - there is no empirical content in logic - but also it is not the whole story. Mario Bunge, a philosopher of science, dismissed Wittgensteins philosophy of mathematics because he reduced mathematics to logic. For example, he said:

Wittgenstein wrote in his Tractatus:

6.234 Mathematics is a method of logic

6.22 The logic of the world, which is shown in tautologies, by the propositions of logic, is shown in mathematics by equations

Of course, Wittgenstein was writing in the early days of model theory. And what he was writing about was not mathematics per se but how it could be modelled as a formal language. There, mathematical truths - theorems, in a word - are tautologies. Now, the content of a specific theory is which tautologies, that is theorems, are chosen to investigate. Not all tautologies, that is theorems, are created alike. But in model theory, we think of all tautologies are alike as we are interested in questions of the logic as a whole. For example, whether it is sound, complete or decidable.

Not the answer you're looking for? Browse other questions tagged logic philosophy-of-logic tautology or ask your own question.