Create a statement in propositional logic. This statment must have 2 attributes. (The attributes are specified in the top header)

This statement would achieve these 2 attributes through its wording. This statement cannot be false because if it were false; it would either generator a paradox, or break the rules of propositional logic.

Yes, it will be very difficult (although I suspect the answer will be simplistic, like all answers to difficult formal language questions). But, please only post an answer if you have created a statement that acts in the way described in the title. If you don't think it can be done, then please either post a comment or don't be involved in this post at all. For those who think this is impossible, consider Liar Statements (AKA "This statement is false"). Liar Statements seemed impossible to exist, until they were discovered.

Everything below is not part of the question, however it provides useful information. 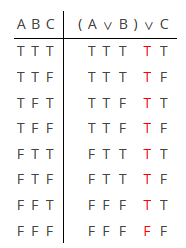 According to the axioms of propositional logic, a statement must be either true, false, or undefined. Therefore, the logic table would actually be the following. Because A, B, and C could not all be false. 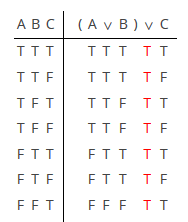 3
Is always lying about everything a consistency?
2
Why statement “either ”X is false“ or ”X is not false“” is not correct?
10
Shouldn't statements be considered equivalent based on their meaning rather than truth tables?
1
Why is this Statement correct: G implies ¬Contradiction?
1
Are statements in modal logic true or false?
2
In propositional logic, why can a FALSE antecedent of conditional be simplified to TRUE?
0
Describing differences between “computational” and “non-computational” proofs
1
always false vs necessarily false , is it the same?