Is there any evidence for 'identity epistomology'?

For having the temerity to defend himself, Mr. Packer was accused on social media of “excusing racism” and “whitesplaining.” Such logic extends a disturbing trend in left-of-center public thinking: identity epistemology, or knowing-through-being, somewhere along the line became identity ethics, or morality-through-being. Accordingly, whiteness and wrongness have become interchangeable — the high ground is now accessible only by way of “allyship,” which is to say silence and total repentance. The upside to this new white burden, of course, is that whichever way they may choose, those deemed white remain this nation’s primary actors. 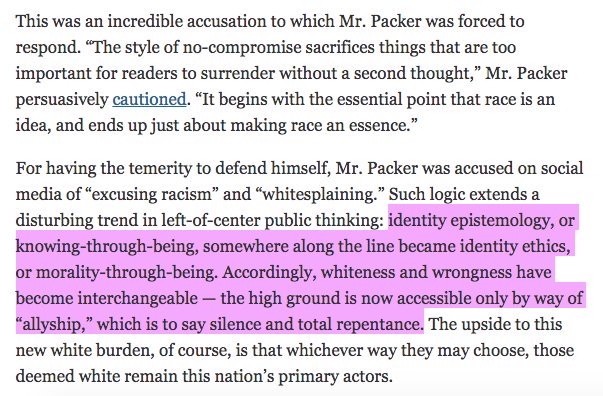 My question is: Is there any evidence for 'identity epistomology'?

Yes, and a lot of it is really great.

If you just want a crash-course I can recommend this paper by Donna Haraway. It's short, and readable, and as far as I know it . Rather than summarize its argument I'll give you a motivating example. It's a true story from An Introduction to Feminist Epistemologies, which I don't have on hand so I can't source.

Except what nobody took into account was what it would be like to be a woman in that experimental setting. They were alone in a dark room with, typically, a male researcher, so they were often already somewhat uncomfortable. Then their task involved requesting small alterations. This is something women are socialized not to do; statistically, women are more likely to say, "It's fine" when it really isn't than men are.

The experiment was critiqued by a female scientist, because it took someone with a particular kind of experience to see what the male scientists missed. And to her it was obvious.

EDIT: Here is another great example that I can cite directly about gender politics and sperm and eggs.

I could come up with similar examples about race and sexuality. The point is, even science is not immune to standpoint bias, and therefore not above standpoint criticism.

Frames produce intelligibility. Which she defines intelligibility "as the general historical schema or schemas that establish domains of the knowable."

In otherwords, people who predominate these spaces of influence (what Michel Foucault calls "regimes") literally delimit human purview - they demarcate what is even thinkable through their gazes (frames). This, by itself, limits knowledge production to those with "legitimacy" and symbolic capital in various fields (cite: Pierre Bourdieu). It would be impossible not to diffract knowledge through the keyhole (minuscule,biased, experiences) of those who have accumulated power in society (regardless of the group). I'm much more likely to hear the thoughts of a Harvard graduate with a Law degree (Barack Obama/Ajit Pai) than I am a queer, paraplegic, woman of color living under an overpass.

The next question is how do you prove epistemological identitarianism? Well you'd assess the phenomenology of those in power--cite: "Being-white-in-the-world",etc. Robin Diangelo explicates such a phenomenology in her brilliant work on social fragility in her paper "White Fragility" gives us an affective map and phenomenology of hegemonic groups in society (maled, whiten, etc.). She outlines 10 taboos (defensive triggers, politically correct topic avoidances -if you will) that are iteratively deployed to, quite literally, create an intellectual safe-space that repudiate these triggers from ontology (this technique is called an affective technology- BTW):

According to Robin Diangelo, within the rubric of the phenomenology of dominant groups are avoiding these 10 triggers -- that is this enumerates key affective states and epistemological limitations of dominant groups. The fragility thesis state that they'll avoid these triggers at all cost. The function of fragility is to "discipline" bodies to NEVER interrupt or question racial, gender, sexualized, etc. hierarchies in the West. Also, it arises from what Diangelo called a "racial equillibrium" that hyper-sensitizes dominant groups from being able to interrogate the impact of their hegemony. In the case of whiteness-- Sara Ahmed states that "whiteness functions as a form of social comfort that allows bodies to extend into spaces that have already taken their shape." In otherwords, the function of hegemony in generate is to minimize triggers for hegemonic groups and safe-spaces (keep space homogeneous and functioning like monoculture--through racial segregation, job discrimination,internment camps, etc.).

The fragility thesis is easy to prove. Go to Youtube, Quora, X.stackexchange.com,etc. and search for content titled any of the following "Why do white men__", "male privilege", "this is racist", etc. these phrases make the cardinal mistake of racializing whiteness, questioning male merit,suggesting white-identifying people can be racist, etc. so they'll likely have severe thumbs down not necessarily due to the merit of their ideas but the identities of those consuming the content (because the people who patronize the site are overwhelmingly 1 demographic).

More proof: Now look at your old college syllabi. I bet you "patriarchy", "sexism", "white supremacy", "heteronomative hegemony", "christian supremacy", etc. were never mentioned in any of your classes despite these being some of the most powerful social constructions in western society that determine so much. Also, how homogeneous was your faculty? This is proof of how homogeneity results in a identity-derived biases impacting knowledge and thus epistemology.

Nothing I am saying is novel. Foucault calls this the "Power/Knowledge" relationship, Bourdieu calls this "doxa", Diangelo simply extends Bourdieu to explain that ANY hegemonic majority group can socially construct a natural account of their "identity epistemology".

Even this well thought out response (I'm writing) isn't immune (I could be downvoted into oblivion, so these complex,but stressing, ideas aren't able to be debated-- such that only one hegemonic account is legible.

So to answer your question, epistemology is Always-Already "identity epistemology"--Whether we consider the dominant situatedness of epistemology (not POCs, not women, not queer, etc.) or subordinated subjectivities the author was carping about; it's still phenomenologically subjective. Philosophers of Sociology would probably go as far as to totally locate the domain of all knowledge (thermochemistry, probability theory, quatum physics, music, art, etc.) merely "Human Constructed" Truths.

Not the answer you're looking for? Browse other questions tagged epistemology identity or ask your own question.

4
How to account for the identity of books or theories? Inquiries into qualitative identity
6
What's a name for the impossibility of identity?
2
The identity problem
9
Could there ever be evidence for an infinite being?
3
identity and self
2
Question of Identity
0
"Reality" the meaning of in epistomology
1
Constitutive Identity
2
Circularity in identity definition
2
Is there a branch of philosophy that rejects identity per se?