What does philospohy say about modern human mentality?

I have to make a presentation on faculty of philosophy. I have chosen topic like: "People as Earth's parasite". I would mainly like to talk about modern civilizational problems, reasons why we does not pay attention for environmental protection, that Earth has limited resources, that money makes people blind but also about overpopulation, starving, wars, corporations.

I am looking for philosophical look on these problems. I need also something about human's egoism (I think, everyone is an egoist - what I mean, even being altruistic has roots in egoism, because helping other people makes US happier) - in that kind of perspective.

If you have your own opinion about mentioned problems feel free to write it here! I will appreciate every one! Thanks!

You can probably only preach to the already converted, there will probably be a certain number in attendance at your talk who are sympathetic to your message, as for the rest you will be knocking your head against the wall.

How to get run out of the room? You will have to go to Freud, 1923, The Ego and the Id, "What is now holding sway in the superego is, as it were, a pure culture of the death instinct." "As is well known, in the superego there is all of human civilization with its structures, its taboos, its laws, its ideologies." Jose P. Miranda, Marx and the Bible, Orbis Books, 1974, p. 281.

(The core of Miranda's book is actually Heidegger-Bultmann-Tillich, and not Marx, but there is a wrapper of Marx, so to speak, on each end of the book.). Btw, Miranda is not writing a book about the environment, but he does write some things at the end about death, and even overcoming death.

We can get ourselves into a narrowly rational dynamic where we tell ourselves "it" cannot be stopped, we tell ourselves that we have lost control of the object that we ourselves created. We buy into our own Frankenstein story, because All-father, daddy, or in some way the parent (all the shoulds and musts) of our civilization told us "it", this thing, was the right way to go, even unto death.

The control of the superego acts to repress the big picture, rational talk has little chance to change the person, and forcing the issue can even result in a psychological crisis.

The large picture of the rational, gets lost in tomorrow's small "rational" irrational acts. So death talk, suicide talk, apocalyptic talk, nihilistic talk, starts leaking out of the system. Let's hope it that in the short term people can sustain hope, and work with the ship to turn the ship.

To understand further what is going on in the superego, particularly the effects of the authoritarian "Daddy" on the child (and the grown up child), see for instance: "The Broken Rebel; a study in culture, politics, and authoritarian character."Rupert Wilkinson, Harper & Row, 1972.

But you can't do any of this today, you can't mention Freud today in polite company, you'll be lucky to even find the books cited. You'll get thrown out of the room.

We have to understand that some people cannot, they cannot, psychologically, face up to this problem. In our society, we can gently try to move people away from apocalyptic visions and acting out, and move them gently away from nihilism (I.e. try to prevent Thanatos from running amok in our world) , but that is all we can really do, and in the meantime work with those who agree with us that this issue is important.

P.S. I am focused here on psychological issues which, if they have come into philosophy at all, came in from the Frankfurt School. But I am in no way suggesting that Marx qua Marx had the solution to our environmental problems, though some are trying mightily right now to make Marx into an environmentalist. Marx was in favor of our taking control of history, taking control of ends, our not being passive, I think it's safe to say that. In my opinion, if Marx came back today, he would first catch up on his history, then go to current events, primarily the economy.

Human beings are parasites only metaphorically. A biologist might need to correct me but I understand parasites to be organisms that are dependent on their hosts for essential resources. While human beings are dependent on the eco-system for their essential resources, this does not make them parasites. They prey upon and exploit other - probably all or many other - species but that does not make those species 'hosts' exactly.

After al, human exploitation does not involve physical attachment to the host or residence in the host; and these are the typical if not specific attachments of host to parasite.

In a broader sense, quitting biology, human beings are parasites in the sense that as with strict parasites, human beings extract essential resources from the eco-system for no benefit but their own and without compensating contributions. Human beings are analogous to parasites.

I am not quite sure how you can make a connection with egoism except that the way in which human beings extract resources from the eco-system is typically for species benefit - our own. If we do or when we do make compensating contributions, as in replacing trees destroyed by log-felling in rain forests, this is with a view to the sustainability of resources for our own benefit.

If the human species acts with predominant egoism, you do not need to defend universal human egoism to carry this point. You would need a strong argument to show that 'every one is an egoist'. Deep ecologists can and do respect nature because they believe this is a sane and balanced and morally correct attitude to nature, and not or not merely because it makes them happy. Some have been known to lose their lives in defence of the integrity of nature - not much happiness to be gained from that.

All living things are Earth's parasites. But the question is what we can give in return for the wellbeing of coming generations. Humans are the only living being that can find the value of each thing in terms of money.

You will find some useful information in Indian Philosophy. For e.g. see this: 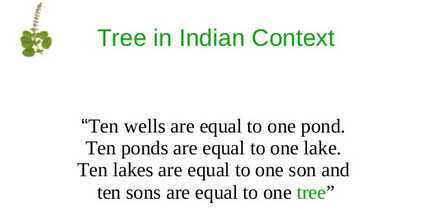 Science is developing amazingly and it seems it is for each human to stand on his own feet ignoring the basics of ecology. Material pleasire would be for a short period only. Actually day by day we are becoming a mere thinking animal.

Ego, if it has developed as a complex, it will create problems. Too much of anything is bad.

Human life has aims; considering him as an animal and as a being that has the highest potentiality. If people were aware of their own Dharma and had lived accordingly, many problems we are facing now could have been eliminated.

These descriptions are just for the enrichment of your ideas. You will certainly find valuable information in Indian philosophy as well as in other philosophies.

The basis of creation is described in Bhagavad Gita: See Chapter 3.10

Many ancient scripts in India known as Puranas, have great significance in our daily life. [The word 'Purana' is derived from 'purana' meaning ancient and 'nava' meaning new. That implies the things (way of life) mentioned in them is applicable now also.]

What does philospohy say about modern human mentality?

According to Indian Philosophy it has already been said. Please refer what is said at the beginning of the Mahabharata.

Parasites in two senses. In terms of the world as a whole, considered as an organism, that is Lovelock & Margulis' Gaia theory. While it is contentious as a paradigm, we have to acknowledge that the oxygen we breathe came from cyanobacteria, and regenerated by plants. Every breath we should give thanks, but we don't. In particular, the Earth has various buffering mechanisms that have stabilised the climate, and human activity is causing the most rapid heating and biggest drop in biodiversity, in the planet's history. Rebirth at least in the cosmic sense it's understood in Buddhism & Jainism, can be understood to set us in a far bigger psychological context.

Second sense, parasites on each other. Marx certainly saw the owners of capital as increasing their wealth parasitically. Criticism of that looks at capital risk and innovation. But cartel capitalism and the overwhelming tendency for the rich to get richer especially by lobbying or corruption, are parasitic, and arguably dominant over the 'good' kinds of capitalism.

Eusociality is a useful for understanding the emergence of altruism. We have something in common with hive organisms like bees, and other animals that sacrifice individual benefits for the collective like meerkats. You dismiss altruism for it's own sake, but we have conscious choices. We can choose to generalise eusociality into a wider sense of service and sharing, like https://en.m.wikipedia.org/wiki/Ubuntu_philosophy

Beware of a simplistic interpretation of 'egoism'. It tends to be used in a way that misunderstands the word on several levels, and ignores the capacity for self-concern and self-awareness to be able to work positively in a persons wider psychological being. I recommend finding a different way to say the same thing, and actually make a case don't assume it's how everyone sees our behaviour.

Edit to add: It's worth understanding something about parasitism before throwing the word around. There are six broad strategies of parasitism. It can have positive ecological effects, controlling numbers of species that over-dominate, balancing out long term into mutual benefit, or even forming new hybrid modes of living with cell organelles and all kinds of mutualism such as corals and plant-mycelium partnerships probably starting out as parasitism. Maybe we shouldn't be scared to be parasites, but understand we need to give back to our host, and stabilise rather than destabilise and destroy.

3
Conception of honor and why human are happy about it and see it valuable
3
About models of Human Cognition
2
Could you explain what the dualist, the behaviorist and the identity theorist each would say about what is going on?
4
What do panpsychists think about artificial intelligence?
2
When does a brain transplant make something human?