Error in "Introduction to Logic" by Suppes?

We may introduce a sentence S in a derivation if there are preceding sentences in the derivation such that their conjunction tautologically implies S.

Then later, when he is introducing the rules for inference with quantifiers (example 1, page 59, reproduced below), he gives a derivation where he uses rule T on a nonsentence (he uses rule T on a formula with free variables). So apparently S does not have to be a sentence in the wording of rule T? 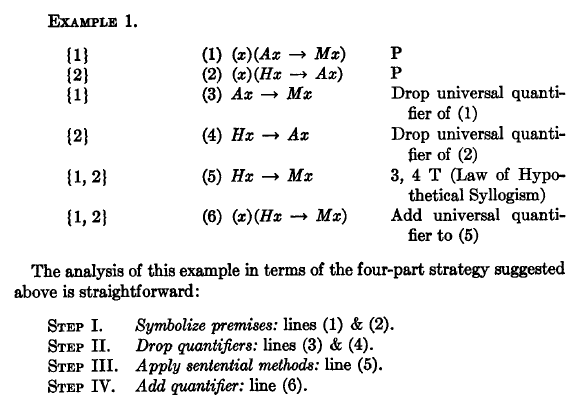 Rule T here allows one to write any tautological consequence of input sentences. Every sentential logic inference rule describes a particular tautological consequence. You can see that if you write out the inference rules as sentences. For example, a rule sometimes called “reiteration” can be written as “If P then P.” That sentence is logically true, and “tautology” is another way of saying “logically true.”

So, in this case, since the law of hypothetical syllogism is logically true, it can be invoked with the rule T. Any other sentence logic rule can also be invoked this way, as can a whole series of them. To put it in different terms, any sentence logic proof can be done with rule T in one step, using this rule, once you know what’s provable in sentence logic.

(As for what he’s doing with the unbound variables, I’m not sure. I’d have to see how he defines well-formed formulas, or what the context of this example is.)

Rule T (page 28) is formulated in the context of sentential logic.

In the context of quantified logic (page 54), Suppes define (as usual) sentence as a "closed" formula, i.e. a formula without free occurences of variables.

In the summary of the rules (page 99), Rule T is summarized with:

Thus, you are formally right: the avoid misunderstanding, in quantificational logic the Rule T must be re-phrased as follows:

we may introduce a formula S in a derivation if there are preceeding formuals ...

Note : of course, the use of the rule made by Suppes is correct.