Why were Kant's categories used in the mathematical category theory?

I am curious exactly how mathematical categories were inspired by Kant's categories. The SEP article on category theory says:

In order to give a general definition of the [natural transformation], they defined functor, borrowing the term from Carnap, and in order to define functor, they borrowed the word ‘category’ from the philosophy of Aristotle, Kant, and C. S. Peirce, but redefining it mathematically.

To give a little more context, my guess is that categories in mathematics don't usually mention individual elements of a set explicitly. They only define properties of elements via how various sets relate to each other. This in turn defines the elements. Is this also the goal of categories in philosophy? In philosophy, are categories defined in order to make explicit the notion that objects in reality are only their properties and only defined by how they relate to other objects?

The paper General Theory of Natural Equivalences by Eilenberg and Mac Lane (1945), where the terminology is first introduced, mentions neither Aristotle, nor Kant, nor even Carnap, who was still alive. The motivation given was:

"In a metamathematical sense our theory provides general concepts applicable to all branches of mathematics, and so contributes to the current trend towards uniform treatment of different mathematical disciplines. In particular it provides opportunities for the comparison of constructions and of the isomorphism occurring in different branches of mathematics; in this way it may occasionally suggest new results by analogy."

This roughly corresponds to Aristotelian view of categories as the most general forms of being, or to Kantian view of them as most general forms of thinking. Then again, it also corresponds to their colloquial meaning, which derives from legal Latin. But Mac Lane is a philosopher-mathematician like Hilbert, see McLarty's The Last Mathematician from Hilbert’s Göttingen: Saunders Mac Lane as Philosopher of Mathematics, so philosophical inspiration is not unexpected. Almost 30 years later Mac Lane recalled in Notes to Chapter I of Categories for Working Mathematicians:

"A direct treatment of categories in their own right appeared in Eilenberg-Mac Lane [1945]. Now the discovery of ideas as general as these is chiefly the willingness to make a brash or speculative abstraction, in this case supported by the pleasure of purloining words from the philosophers: "Category" from Aristotle and Kant, "Functor" from Carnap (Logische Syntax der Sprache), and "natural ransformation" from then current informal parlance. Initially, categories were used chiefly as a language, notably and effectively in the Eilenberg-Steenrod axioms for homology and cohomology theories."

However, the idea that objects are merely relational placeholders in a structure was certainly alien to both Aristotle and Kant. But it was common in French structuralism of the time derived from Saussure, and the notion of structure was taken up by Bourbaki, albeit still tied to the set-theoretic base. Kutateladze in Saunders Mac Lane, the Knight of Mathematics claims that he and Eilenberg were into Kant at the time, but I could not confirm this from a first hand source. Still, he tells an interesting background story which sounds plausible:

"In Mac Lane’s opinion, the conceptions of category theory were close to the methodological principles of the project of Nicholas Bourbaki. Mac Lane was sym pathetic with the project and was very close to joining in but this never happened (the main obstacles were in linguistic facilities). However, even the later membership of Eilenberg in the Bourbaki group could not overcome a shade of slight disinclination and repulsion. It turned out impossible to “ categorize Bourbaki” with a theory of non-French origin as Mac Lane had once phrased the matter shrewdly and elegantly. It is worth noting in this respect that the term “category theory” had roots in the mutual interest of its authors in philosophy and, in particular, in the works of Immanuel Kant".

The connection to Carnap also does not seem to go beyond general similarities. Here is from Belnap's paper Under Carnap’s Lamp: Flat Pre-semantics on Carnap's usage:

Corfield, quoting Belnap on the n-Category Cafe blog, is ambivalent:"I guess that gives us an idea of why Mac Lane chose it, although I don’t see that the notion of a functor taking arrows as arguments is present." One can see that MacLane could have borrowed not just functors but also categories directly from Carnap. Of course, Carnap himself, like other positivists, was heavily indebted to Kant, see e.g. Friedman's Parting of the Ways.

To be clear before I even begin, I do not answer the question.

In the book ''Tool and Object, A History and Philosophy of Category Theory, authors: Krömer, Ralph'',

The discovery of ideas as general as these is chiefly the willingness to make a brash or speculative abstraction, in this case supported by the pleasure of purloining words from the philosophers: “Category” from Aristotle and Kant, “Functor” from Carnap (logische Syntax der Sprache), and “natural transformation” from then current informal parlance [Mac Lane 1971b, 29f].

The reference ''Mac Lane 1971b'' refers to the usual book ''1971b. Categories for the working mathematician. Volume 5 of Graduate Texts in Mathematics. Springer.''

The page 69 is where the quote is printed 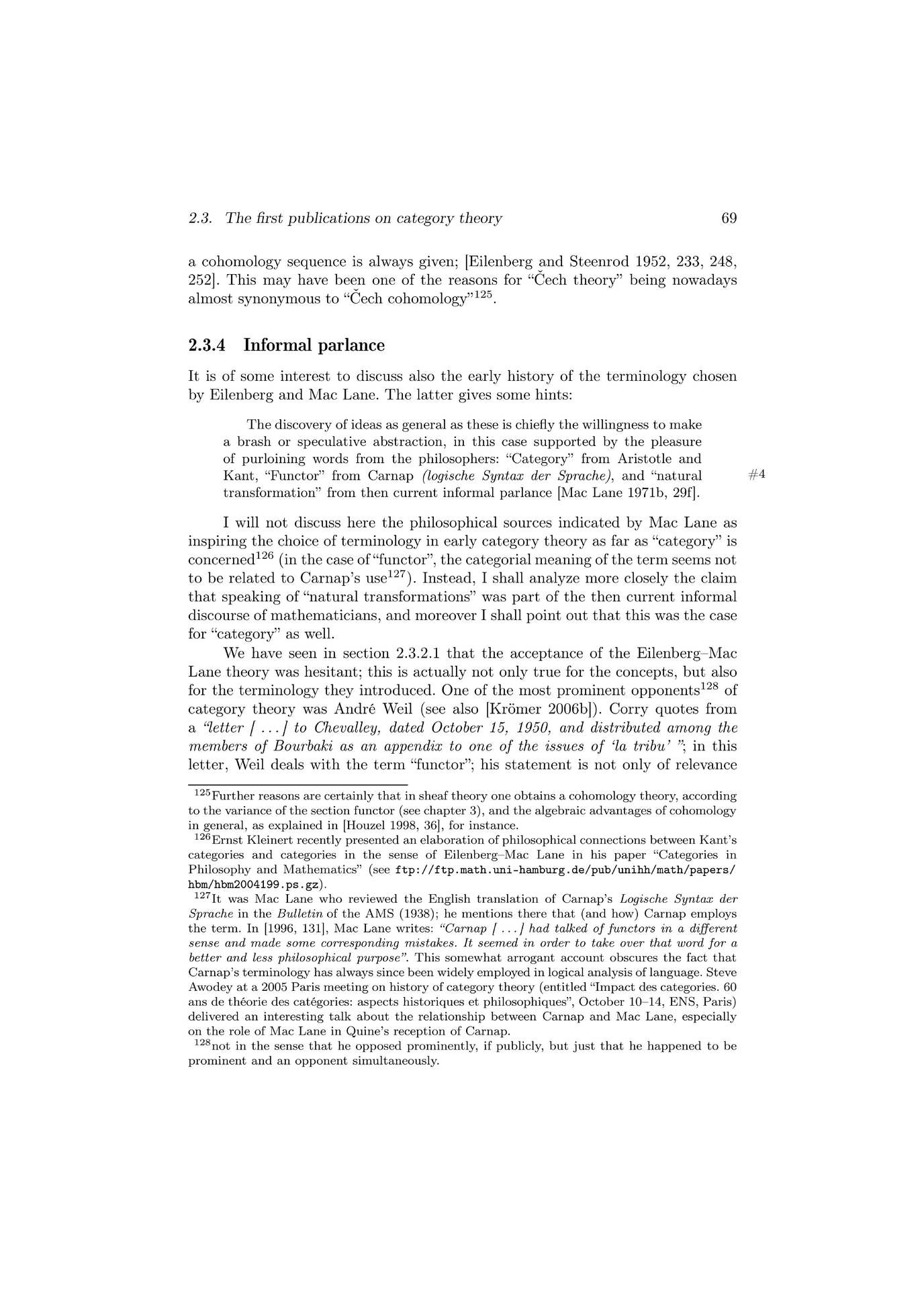 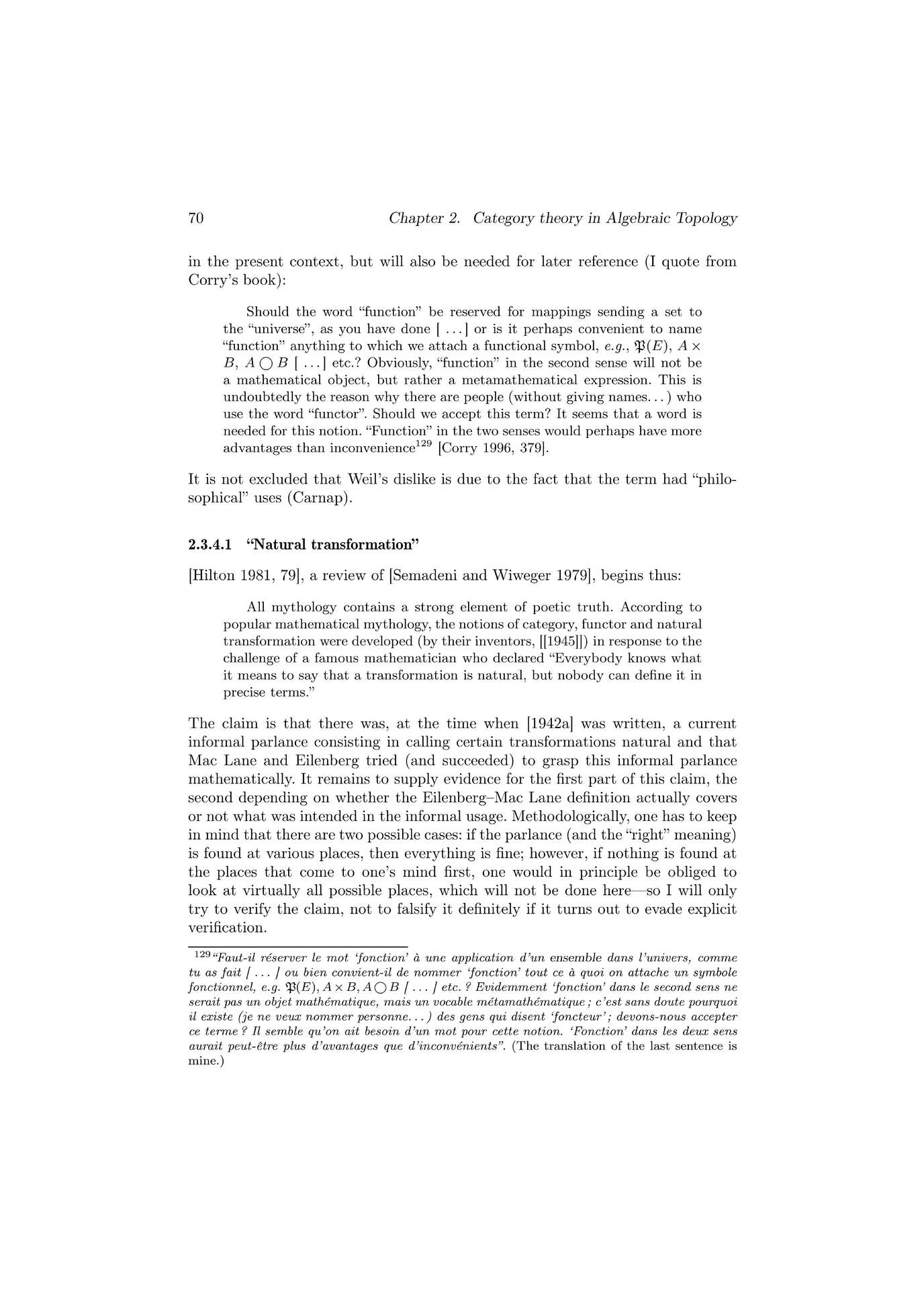 This is correct. However it might be worth pointing out that MacLane & Eilenberg introduced the basic notions of category theory without relating them (in a fundamental way) to set theory. My guess is that these notions merely made the language of algebraic topology clearer. There was no suspicion on their part then of its later explosive growth.

It was actually Lawvere that thought through its relation to set theory. He attempted to explain his ideas to MacLane and he heard him out. But at the end of the discussion he told Lawvere, he couldn't see how set theory could be done without elements. It took some time for these ideas to become clear.

25
What are the philosophical implications of category theory?
7
How does Kant derive the categories of the understanding from the logical forms of judgment in the Critique of Pure Reason?

7
How to characterize Kant's usage of the term "noumena"?
25
What are the philosophical implications of category theory?
8
Is there any connection between Structuralism and Category Theory?
3
Connection between Kant's defense of the belief in God and Kant's categories?
4
books or references on an introduction of mathematical philosophy/philosophy of mathematics
4
What is Kant's view of a mathematical object?
7
How does Kant derive the categories of the understanding from the logical forms of judgment in the Critique of Pure Reason?
5
Set theory vs. type theory vs. category theory