What are the better arguments against Nietzsche's sovereign individual being a real ideal?

What are the better arguments against Nietzsche's sovereign individual being a real ideal?

Apparently there is a "burgeoning" school of thought, falling under the term "revisionism", which says that Nietzsche is parodying the sovereign individual, trying to show that such an individual is not really any more "free" (The Oxford Handbook of Nietzsche, p519). 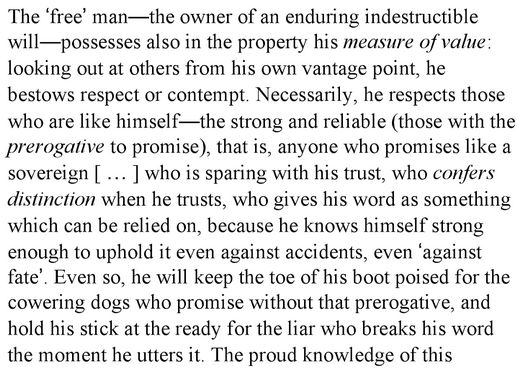 I suppose I'm asking because I am quite habitual and unreliable, to the extent that it seems obvious to me that I can correct myself without becoming less free. I'm wondering if there are any "revisionist" arguments of this sort which, to be specific, allow for some actions to be rational or irrational. Then, I think, something needs to be at work besides "personal integrity".

The point at issue is whether GM is irony. There are reasons for regarding Also Sprach Zarathustra as political irony (Daniel W. Conway, 'Solving the Problem of Socrates: Nietzsche's Zarathustra as Political Irony', Political Theory, Vol. 16, No. 2 (May, 1988), 257-280.) Why not GM as moral irony ?

I can cite only an extract here but there is an extended case for an ironic reading of GM in Robert Guay, 'Genealogy and Irony' :

GM is ironic: he tells us so. The first set of metatextual evidence comes from GM ’s own preface, where Nietzsche reports that what he really cared about “was something much more important than hypothesisizing [Hypothesenwesen] about the origin of morality” ( GM P:5). This already gives us reason to suspect irony: his discourse, which seems to consist of fussing over hypotheses about the origin of morality, addresses something that he does not now, nor has ever, actually cared about. The very enterprise is characterized derisively with a funny-sounding neologism (Hypothesenwesen). And Nietzsche reinforces this suspicion when he clarifies his real concern, “the problems of morality” ( GM P:7). These problems, says Nietzsche, are worth taking seriously, and indeed more seriously than anything else, so that “some day one will perhaps receive permission to take them cheerfully ” ( GM P:7). Treating this entire subject matter as one worth inquiring into, in other words, is simply a necessary first step to finding the whole matter risible. Hypothesisizing is possibly comic and certainly instrumental rather than representational. This should not be surprising. The subtitle of GM — another piece of metatextual evidence — is, after all, “eine Streitschrift,” “a polemic,” and not, say, “a scientific account of moral phenomena.” (Robert Guay, 'Genealogy and Irony', Journal of Nietzsche Studies, Vol. 41, No. 1 (Spring 2011), 26-49 : 32.)

Readers must make up their own minds about the cogency of Guay's (extended) argument. I can only say that I find it hard not to read Nietzsche as genuinely recommending certain virtues and as dismissing those associated with the slave morality of Christianity.

Nietzsche and Socrates also share a common orientation to the task of political education. Both view political education as an essentially aretaic enterprise: they are primarily concerned not with the promotion of correct behavior, but with the inculcation of virtuous states of character. Just as Socrates promotes the just life as a political ideal, so Nietzsche recommends certain virtues that he associates with his own political ideal, the Übermensch*. Both Nietzsche and Socrates, how- ever, acknowledge the indeterminancy of an aretaic program of political education; as they both readily admit, a teacher of virtue wields no direct control over the formation of his students' character. Whereas direct discursive measures, such as the promulgation of rules, imperatives and maxims, can certainly effect a change in behavior, they are largely powerless to bring about the desired change in character. As a consequence, virtue cannot be imparted to others via traditional pedagogical means. Nietzsche would therefore endorse Socrates' appar- ent conclusion in the Meno: If virtue could be taught, then why do virtuous exemplars not abound?

The indeterminacy of an aretaic program of political education serves to imbue the promotion of virtue with a certain irony. The promotion of virtue has traditionally been deemed foolish-by critics ranging from the earliest Cynics to contemporary maximizers of utility-for the teacher of virtue must purposively engage himself, despite the fact that his degree of success in this venture largely defies detection. Since the teacher of virtue can only rarely verify his own success, the promotion of virtue thus comprises a potentially interminable enterprise. The irony of an aretaic program of political education therefore derives from the unique demands it places on its agents. A teacher of virtue obviously must take his task seriously, yet he cannot afford the luxury of also taking himself seriously. If he were to fail in the former regard, then his cynicism would discourage any prospective auditors; if he were to falter in the latter, then the inevitably "unsatisfactory" progress of his auditors would eventually frustrate his efforts. (Conway, 259.)

If Conway is right there is an irony in the aretaic (from Gk arete = virtue) programme itself, as he explains in the second paragraph, not only in Zarathustra (his immediate subject) but also (though he does not mention it) in GM. Can Nietzsche, the eternally self-reflective, not have realised the irony in both cases ?

I am unconvinced by Guay's arguments; GM just doesn't read like irony. (Make up your own mind.) Conway's more oblique angle on Nietzsche's ironic engagement seems a more promising path to explore. But either way, we gain fresh light on the question (complex of questions) of Nietzsche's irony.

Nietzsche's biography strongly argues against Nietzsche's ideal being realized by himself. From age 44 onward, he was in the care of his mother and sister. He had become quite insane.

Conifold, in his comment, is right to an extent, in that at least some "revisionists" base their argument on Nietzsche's phrase "Lord of the free will" being ironic. Nietzsche just doesn't believe in free will. Conifold is, however, wrong to gloss freedom with free will, at least so glibly. It could mean e.g. a strength of character, in creating yourself. Or freedom not of agency but responsibility (Gemes).

Whether or not being unreliable means I'm "out of luck" with Nietzsche is to personalize the issue, and laboriously so; always a danger when trying to learn about Nietzsche from others.

9
What was Nietzsche's Position on Darwin and his theory of Evolution by Natural Selection?