Can inductive arguments be made in first order logic and, if not, why not?

After reading a question by rus9384 Why is faulty generalization called an informal fallacy? I wondered whether induction can be part of any argument in first order logic (FOL).

Given the rules for existential elimination and universal introduction, I don't think this argument can even get started, but I may be wrong.

Clearly, we can go in the opposite direction. Here is a proof of going from a universally quantified sentence to an existentially quantified one: ∀x: F(x) ∴ ∃x: F(x) 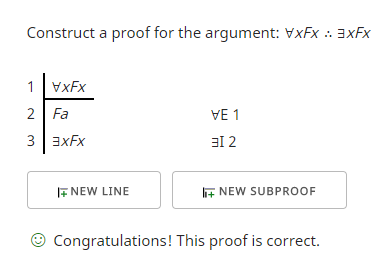 I am not concerned with whether induction is a fallacy, formal or informal, but to what extent induction arguments can be symbolized or made at all in FOL.

QUESTION: Can inductive arguments be made in FOL and, if not, why not? If they can, an example of their use would be helpful.

You can formalize inductive logic, but it is usually though to require the introduction of an ambient Bayesian probability theory. The reason first-order logic alone doesn't work is because first-order logic examines whether an argument is valid or invalid. An argument is valid if and only if the truth of the premises guarantees the truth of the conclusion. By contrast, an inductive argument provides probable support for the conclusion. To evaluate inductive arguments you need a way to evaluate the degree of support a set of premises provide for the conclusion. First-order logic makes no such provision. Hence to formalize inductive logic probability theory is used. Intuitively, what you want to know is how probable a state of affairs P is given the premises.

Check out the following page if you want to know more: https://plato.stanford.edu/entries/logic-inductive/

Some examples of inductive arguments represented in a common notation for first-order logic, in which they are all invalid, include:

There are infinitely many examples.

Not the answer you're looking for? Browse other questions tagged fallacies induction symbolic-logic or ask your own question.

2
Can the word "probably" be used in a proposition? (logic)
2
Why is faulty generalization called an informal fallacy?