This is the first time I have posted anything on this forum. I am using Tomassi's Logic. Unfortunately I have been unable to solve some of the problems. One I can't solve is this one:

Moreover, I don't see how to proceed because of the negations on the outside of the parentheses.

Thanks for the help!

Here is one way to show this using natural deduction. Of the rules, I used contradiction introduction (⊥I) which I did not see on your list, but I suspect is permitted because reduction ad absurdum is permitted. 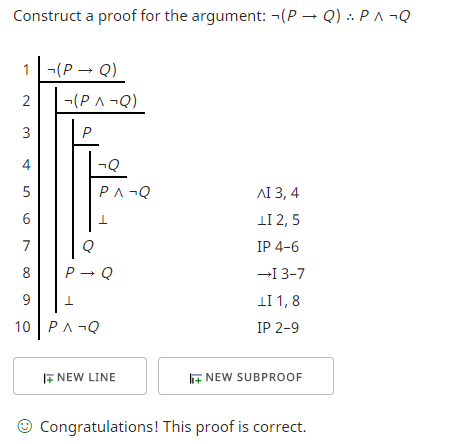 On line 1 is the assumption. I attempted an indirect proof (IP) or reductio ad absurdum beginning on the second line. This completed on line 10 which also completed the proof.

In between I assumed "P" in a subproof and then immediately assumed "¬Q" in another subproof. In line 5 I combined these two assumptions to get "P ∧ ¬Q" on line 5. That contradicted the assumption on line 2 and I completed an indirect proof on line 7 discharging the "¬Q" assumption on line 4. The set of lines from 3 to 7 represented a conditional introduction (→I) or conditional proof on line 8 which allowed me to discharge the "P" assumption in line 3. That contradicted line 1 and so I introduced a contradiction in line 9.

Not the answer you're looking for? Browse other questions tagged logic symbolic-logic or ask your own question.