Why does one negative premise suffice to imply a negative conclusion? 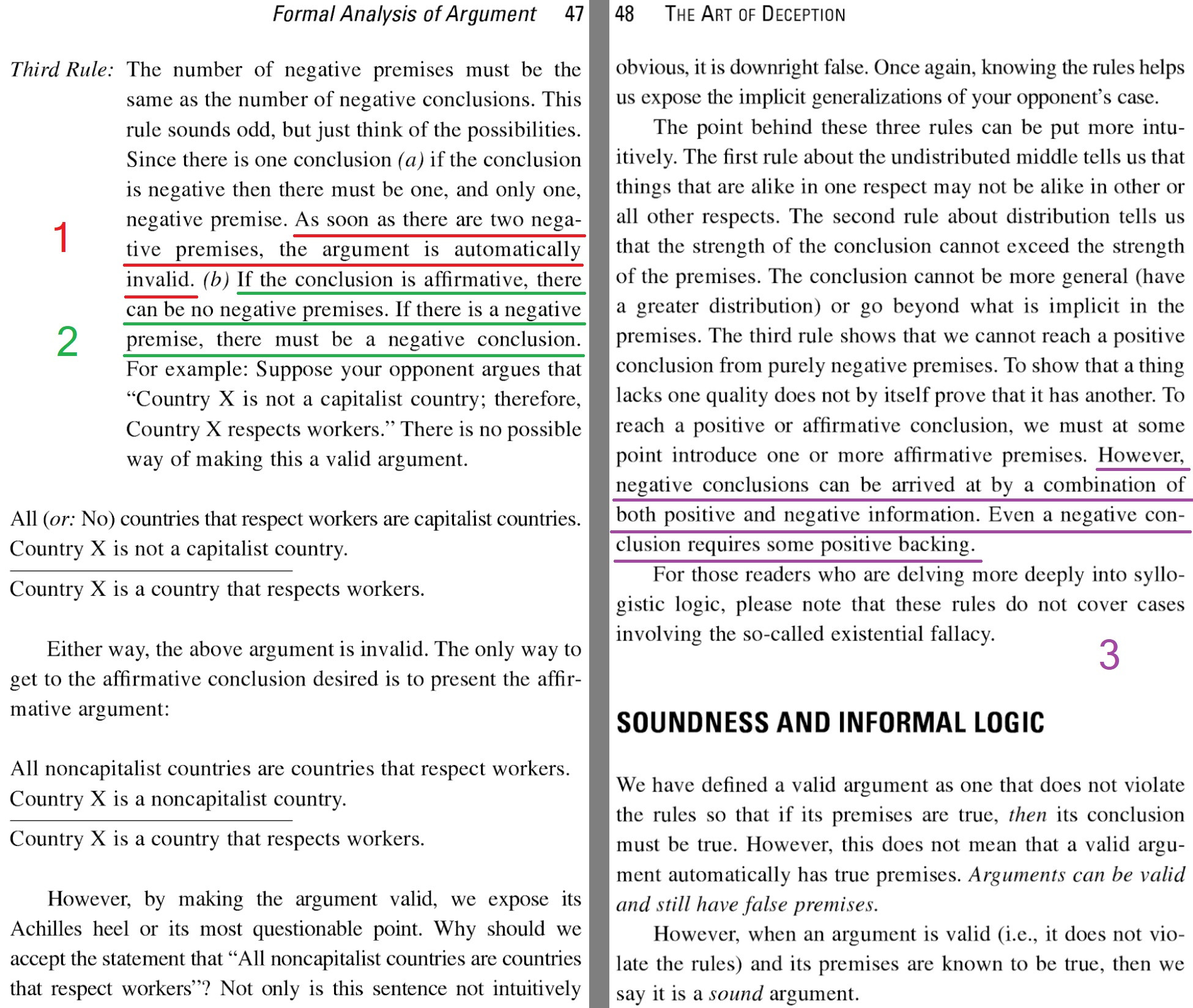 Why's 2 true please? I can't intuit why, because 3 outwardly contradicts it.

I prefer an intuitive explanation, not one with Truth Tables or Formal Deduction.

The assertion 2 is false.

Both are valid arguments. Both have a negative premise, and an affirmative conclusion.

The latter is an illustration that you can rephrase probably every negative premise into an affirmative one, and vice versa.

Therefore it does not even seem to make sense to distinguish negative premises from affirmative ones.

That said, it is probably possible to explain why the authors think that 2 is true:

Inside this system, the authors are indeed correct: an "affirmative" conclusion cannot be derived from the "negative" premises that this system allows.

As to your question regarding 2 and 3, consider the following argument:

This argument satisfies both condition 2 and condition 3. I don't see how these contradict each other.

Why's 2 true please? I can't intuit why, because 3 outwardly contradicts it.

I prefer an intuitive explanation, not one with Truth Tables or Formal Deduction.

1: As soon as there are two negative premises, the argument is automatically invalid.

A potentially helpful intuitive explanation might be this analogous argument replacing the premise or conclusion of a syllogism with an affirmative identity, x = y, or its negation, x ≠ y.

There are three cases to consider for three identities or their negations:

Although these affirmative identities and their negatives do not represent all possible statements in syllogisms they hopefully show intuitively why the claims in Capaldi and Smit's text are likely correct.

Why does one negative premise suffice to imply a negative conclusion?

One negative premise is sufficient to require a negative conclusion because of the distribution of terms in the premises. From the Capaldi and Smit book:

In the statement Some P are Q, neither term is distributed. The statement says that at least one P is a Q, but says nothing more.

Both statements, All and Some, are positive. They add information about Group P in relation to Q.

Distribution, also called Distribution Of Terms, in syllogistics, the application of a term of a proposition to the entire class that the term denotes.

Not the answer you're looking for? Browse other questions tagged logic syllogism or ask your own question.

0
Why is the biconditional true if both components are false?
1
Why can an affirmative conclusion never be drawn from negative premises?
11
Intuitively, why is ¬(P ↔ Q) ≡ P ↔ ¬Q?
4
Intuitively, why does (B → S) ≡ (¬B ∨ S)?
3
In categorical logic, why must any argument with two negative premises be invalid?
1
How is this Appeal to Pity fallacious and a Red Herring: Our country should never war, because wars corrupt our troops?
1
How are “goals that we think can be achieved by a good-faith effort within the allotted timetables” fallacies of equivocation and creative thinking?
3
How's this Equivocation: IQ tests “measure not intelligence, but only the ability to comprehend and manipulate symbols”?
3
Where's the Red Herring in arguing that “I see it as a glass half full rather than as a glass half empty”?
2
How are there at least 2 instances of Post Hoc in “I am opposed to charging tuition. Without tuition-free education, I could never have become mayor”?