Is it rational or levelheaded to regard obscurantists as brash, unprincipled, and self-centered? That's how I feel when I try to read their writing.

Postmodernists, who were rightly enthusiasts for ‘liberating’ ethical and political doctrines, were at the same time immensely dependent on the extraordinary prestige of these new intellectual authorities, whose influence was not a little sustained by their heavy reliance upon a neologizing jargon, which imparted a tremendous air of difficulty and profundity to their deliberations and caused great difficulties to their translators. According to the American philosopher John Searle: 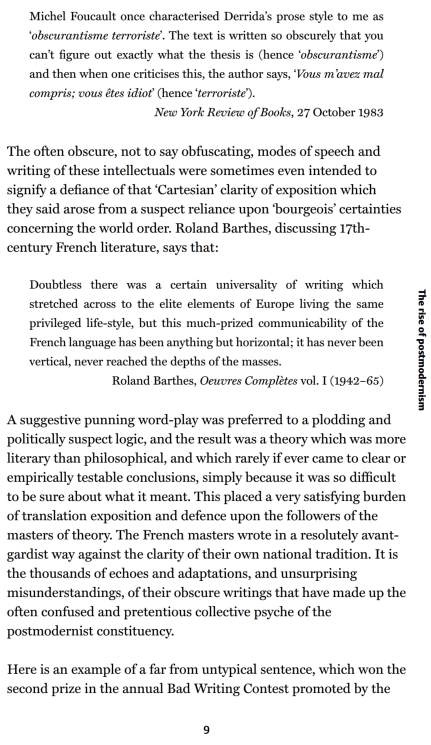 scholarly journal Philosophy and Literature. It may or may not become clearer to the reader by the end of this book, and it comes from Homi Bhabha’s much referred to The Location of Culture (1994).

If, for a while, the ruse of desire is calculable for the uses of discipline, soon the repetition of guilt, justification, pseudo-scientific theories, superstition, spurious authorities and classification can be seen as the desperate effort to ‘normalise’ normally the disturbance of a discourse of splitting that violates the rational enlightened claims of its enunciatory modality.

Psychoanalysis can therefore learn much from linguistics and should look harder at the linguistic processes involved in reading and speaking. For this reason Lacan’s writing is, like Jacques Derrida’s, dense with puns and wordplay. The unconscious, for Lacan, manifests itself in the way words fail to work. Thus the client in effect speaks the unconscious into being.

Browse other questions tagged postmodernism or ask your own question.

0
“Reality is a social construct” — fair characterization or not?
1
Do postmodernists insist that “laws of physics” are “mere social conventions”? Or not anymore?
3
What are the benefits of Jean-François Lyotard's “little narratives”?
3
Is the “blind men and an elephant” illustration self-refuting?
2
In Postmodernism, why is irony “the only option”?
1
In comparing Existentialism with Postmodernism, what do 'process', 'essence', 'authenticity' mean?
4
Self refuting pillar of postmodernism