What is the relationship between consciousness and intelligence?

Some philosophers say that consciousness is all about experiences, feelings, etc.

To my understanding, intelligence is mostly viewed as a functional feature and hence not as an experiential one. For example, the Turing Test is suggested in Turing's original paper as a method by which we can determine if a machine is intelligent or not. A machine, according to Turing, can be treated as intelligent if it successfully simulates intelligent behaviour. It doesn't have to be conscious in order to do so. Turing himself suggests that there is a sharp distinction between consciousness, which cannot be simulated, and intelligence, which can. For him, mere simulation is enough for intelligence.

I present before you two quotes or opinions about the relationships/difference between consciousness and intelligence- just for comparison.

Consciousness is the ever-present, Absolute purely Spiritual entity which is independent of cerebral activity. But when asked about Mind, they say it's same as Consciousness while Mind is semi-Physical like that of space. Each one of us knows that there's space but we cannot 'see' space as such except by the objects present in space. Our inability to perceive space doesn't make it non-existent.

Intelligence is due to the thinking principle— a part of the mind but mind by itself cannot perceive— the perceiver is the Consciousness,— the real You or 'Jeeva'; that part of consciousness that's associating itself with the 'mind-body' complex owing to primordial ignorance acquired during the millions of births and deaths by evolution from small creatures to humans.

The important difference between the two is: Consciousness is ever present, unchanging, merely witnessing what the 'Jiva' — the man is deluded by the illusory world. In this sense, all scriptures of all religions say " He knows everything at once " The realized Soul is God himself; in this sense, you can say Jesus is God. You and I are ignorant gods. To realize this Truth all we have to do is to realize that we are owners of this physical bodies, not this foul smelling and urine and fecal matter filled body itself. It is so easy to understand though difficult to realize truly.

The mind is an illusory screen serving the purpose of presenting the information to YOU - the Consciousness.The difference between them is so obvio

There are different forms of intelligence. IQ tests measure g or general intelligence. Generally, this is the ability to understand logic and solve problems. Emotional intelligence (EI) is the capability of individuals to recognize their own and other people's emotions, discern between different feelings and label them appropriately, use emotional information to guide thinking and behavior, and manage and/or adjust emotions to adapt to environments or achieve one's goal(s).[1]

Consciousness is the state or quality of awareness, or, of being aware of an external object or something within oneself. It has been defined variously in terms of sentience, awareness, qualia, subjectivity, the ability to experience or to feel, wakefulness, having a sense of selfhood or soul, the fact that there is something "that it is like" to "have" or "be" it, and the executive control system of the mind.

In contemporary philosophy, its definition is often hinted at via the logical possibility of its absence, the philosophical zombie, which is defined as a being whose behavior and function are identical to one's own yet there is "no-one in there" experiencing it.

Therefore its difficult to separate the two unless one limits the domain itself and can depend on the choice of the person.

Maybe in terms of organization one way to understand the "relation/difference/complementary/..." of consciousness and intelligence on something like this:

1. information - in life - [DNA is made up of six smaller molecules -- a five carbon sugar called deoxyribose, a phosphate molecule and four different nitrogenous bases (adenine, thymine, cytosine and guanine).] for example from here: http://cs.boisestate.edu/~amit/teaching/342/lab/structure.html

2. DNA gets organized in a way that up to the point define by The Cambridge Declaration on Consciousness On this day of July 7, 2012.

3. Assuming that homo sapiens sapiens has a distinctive form of consciousness this makes it that such distinctiveness leads to the emergence of several features and one of them is intelligence [human intelligence?].

4. Then it seems that certain manifestations of intelligence become routine and can be organized in an automatic process (I really like this expression of George Orwell in book of 1949 called 1984) which is more or less what the people call AI (Artificial Intelligence). If we think it through we could have an analogy here between RNA/DNA and Intelligence/Automatic Process. This is just one reference among many https://www.technologynetworks.com/genomics/lists/what-are-the-key-differences-between-dna-and-rna-296719

5. As an (?)hypotheses to explore further(?) consciousness could be something higher/macro and intelligence as something that might emerge and capable of providing processes (including heuristics) that if there is will they will be automatically processed (here "intention" of Martti Heidegger might be important concept). This is really exciting theme. Remember we have already board members who is an automatic process. See for example Simon Sharwood, Software "appointed to board" of a Venture Capital Firm. Such board members are intelligent but have not consciousness.

The following picture tries to capture the message of the illusion that we are aware of our consciousness. 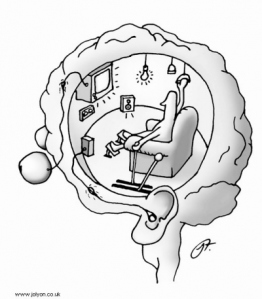 Not the answer you're looking for? Browse other questions tagged philosophy-of-mind consciousness artificial-intelligence intelligence or ask your own question.