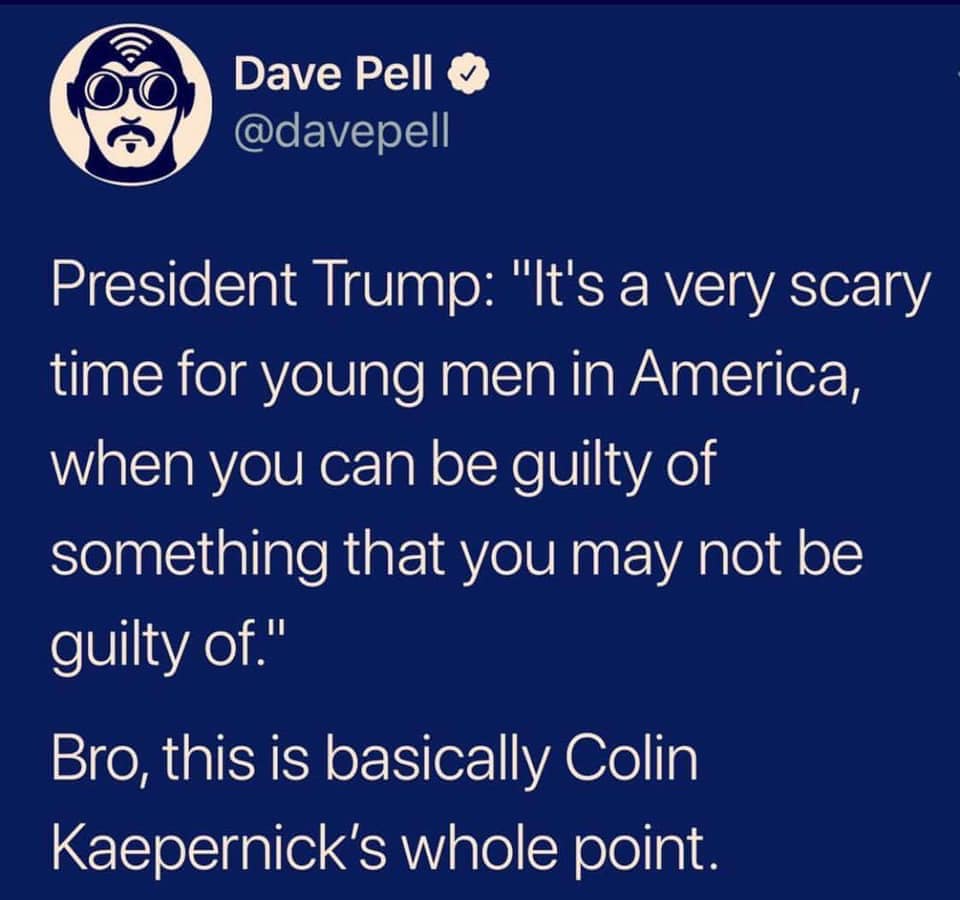 Honestly, it really doesn't make too much sense.

Could someone help me understand the argument here, and if it falls into a category of logical fallacies? I've googled around and I'm too new to the study of logic to come to grips with it.

Both Trump and Kaepernick make similar statements, that there is a group of people which may be unfairly treated because of things they didn't even do. Trump is against Kaepernick's stance, even though they are similar ideologically - people shouldn't be accused/oppressed because of who they are and not what they did.

It's not about whether Kaepernick is right or Trump is wrong. It's about the ideological inconsistency needed to agree with one and not the other.

Perhaps unwisely, I'm going to ignore the political context of the question.

However, do note that politics carried out on Twitter is worlds away from formal propositional reasoning. In particular, it is important to be aware of the unstated assumptions that back up a tweet. It is necessary to accurately understand those assumptions and engage with them to make a meaningful contribution to a discussion.

That isn't actually saying anything about whether either of them is correct in the topic at hand, it's more of a moral jab at Trump's perceived unfair treatment of Kaepernick.

That does touch on the truth of the claims. Again it doesn't claim that Kaepernick was right, only that Trump cannot be right in both cases.

This assumes that the premises they both work from are in fact correct.

From the tone of the tweet, this is probably not the claim being made. However it's an acceptable claim to make from the logical form. It's the sort of logic you might use if you replace Kaepernick with a clear bad guy: "Bro, that was basically Hitler's whole point."

Note that the one thing that cannot be drawn out of this argument is that Trump is wrong about both A and B. I suspect that may be where your confusion came from: because there are multiple claims being made by Trump, "Trump is wrong" doesn't help clarify much! With the divisions made on who is wrong about what, the senses of the arguments can be clarified.

However, as I mentioned above, political claims tend to be too big and too full of assumptions to get a handle on formally. The implication of that is that the details may completely destroy any of the above variants. Consider:

Alex, party kid to mates about going out and getting drunk "There's no point in having this money just sitting in our wallets."

Bob, Alex's Dad about the importance of investment: "There's no point in having this money just sitting in our wallets."

Alex might respond with "Ah, I'm glad you agree with me! I'll take a taxi because there's no way I'll be legal to drive at the end of the evening."

There are at least three logical fallacies one should beware of when listening to polemical and political discussion that one might associate with Dave Pell's October 2nd tweet, the recent notoriety around Judge Brett Kavanaugh's Supreme Court confirmation reaching a high point on Friday, September 28th, the upcoming November 6th US midterm elections, and even this present post bringing attention to what appears to be a side issue.

A straw man is a common form of argument and is an informal fallacy based on giving the impression of refuting an opponent's argument, while actually refuting an argument that was not presented by that opponent. One who engages in this fallacy is said to be "attacking a straw man."

This technique has been used throughout history in polemical debate, particularly in arguments about highly charged emotional issues where a fiery "battle" and the defeat of an "enemy" may be more valued than critical thinking or an understanding of both sides of the issue.

Unless one is hearing something from the other side of a polemical debate directly, one should not trust evidence provided by the opposing side.

Argument from fallacy is the formal fallacy of analyzing an argument and inferring that, since it contains a fallacy, its conclusion must be false. It is also called argument to logic (argumentum ad logicam), the fallacy fallacy, the fallacist's fallacy, and the bad reasons fallacy.

Fallacious arguments can arrive at true conclusions, so this is an informal fallacy of relevance.

A red herring is something that misleads or distracts from a relevant or important issue. It may be either a logical fallacy or a literary device that leads readers or audiences towards a false conclusion. A red herring might be intentionally used, such as in mystery fiction or as part of rhetorical strategies (e.g. in politics), or it could be inadvertently used during argumentation.

Since the main focus of concern is the Brett Kavanaugh confirmation and the US midterm elections, focusing on Trump and Kaepernick appear to be not so much the "whole point" as Pell puts it but beside the point, that is, a red herring.

There may be other logical fallacies associated with political polemic. These are three that might be worth keeping in mind.

Not the answer you're looking for? Browse other questions tagged ethics fallacies argumentation or ask your own question.

3
Is this a fallacy: “You only X because you Y”
6
What is the fallacy where you completely discredit someone because of a single mistake?
3
Is there a logical fallacy that considers a position false because a non-authority agrees with it?
1
What is a logical fallacy that involves saying that a person is something solely because they said so?
1
Fallacy: you cannot criticize Q at time A because you did not criticize Q at time B?
3
Is “You are an X, therefore you should know Y” a logical fallacy ?
4
Help with logical fallacy
5
What is the name of the fallacy where one implies something is false simply because someone evil supported it?