First Critique Edition with both Akademie numbers and A/B numbers?

If I could find a translation of the First Critique that had both A/B numbers and Akademie numbers, this problem would be solved. Does anyone know of such an edition? Alternatively, if anyone knows a way to search Kant's German text, besides the Korpora online, that might help too.

For full-text search, there is no alternative to korpora known to me. If you have electronic copies of the texts (e.g. like the Cambridge Editions), you can use programs like DocFetcher to search across documents. But you asked for a German one.

As of English editions, there is also no edition known to me that fits your needs. This has historical reasons since the Critique of Pure Reason traditionally is cited per A/B edition.

Ironically, the only edition that allows for a transition between both paginations is the physical reprint of the original Akademie-Edition by deGruyter (or earlier (re-)prints, but they are hard to get).

In volume III (B-Edition) and IV (A-Edition until identical), there are B and A edition page numbers respectively at the side of the text which is obviously in the Akademie pagination. These additional page numbers did not make it into the online version, which is a pity.

Caveat: The font is the old German type (it is a photocopy of the original Akademie Edition from around 1900), see image below (not from either texts, but a later volume, hence no page numbers at the side of the text - it is only to show the type). I got accustomed to reading this type fluently in a short time but heard that people tend to have problems with it, especially without former experience. 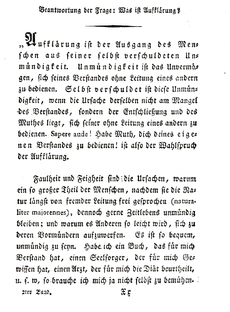 Not the answer you're looking for? Browse other questions tagged kant critique-of-pure-reason or ask your own question.

10
Moral Duty and Happiness: Are Both Achievable?
11
Are the first and second forms of the categorical imperative actually equivalent?
6
Is Kant the first Western philosopher to distinguish between representation and reality?
3
Is anyone considered authoritative on Kant's First Critique?
2
Can kantian categories only be applicated to objects given by the senses?
3
In the Critique of Pure Reason, what is the difference between “schema” and “synthesis”?
4
Did Kant classify the same proposition as both pure and impure a priori?
2
Is Durkheimian critique of Kantian understanding of space and time valid?