III. Mr. N implied the claim that he had fathered Miss A’s child.

IV. Mr. N implied the claim that he had not fathered Miss A’s child.

So this question has a few premises, and it asks us to deductively infer the "conclusion" if I am not wrong. So the premises say that

Hence to me it logically follows that Mr N fathered the child since Mr N says that at least one of the statements he made were false. So if having an affair with Mr N is not false, then he did not father her child must be false.

So is the answer just simply B)? I am not sure why the question mentioned without knowing whether Mr. N is truthful in answering these questions. Does that have an impact in our deductively inferring of Mr N's answers?

logic argumentation validity
Share
Improve this question
edited May 12 '19 at 21:09

So is the answer just simply B)? I am not sure why the question mentioned without knowing whether Mr. N is truthful in answering these questions. Does that have an impact in our deductively inferring of Mr N's answers?

Construct the following symbolization key based on Conifold's suggestion:

The premises are the following statements that Mr. N has made:

‘What I mean is that there is at least one falsehood in the claim that I had an affair with Miss A and that I didn’t father her child.’

The above are the three premises. They may be false, because Mr. N might be lying, but assuming they are true what can we conclude from them, that is, what can we deductively infer?

We can eliminate option "D" because II and III are contradictory.

We can eliminate option "A" for the same reason as "C". At least one of I and II are false and we know that I is true.

That leaves only option "B" which would be a good one to select under time pressure.

With the symbolization key and the premises we can put this in a proof checker as follows: 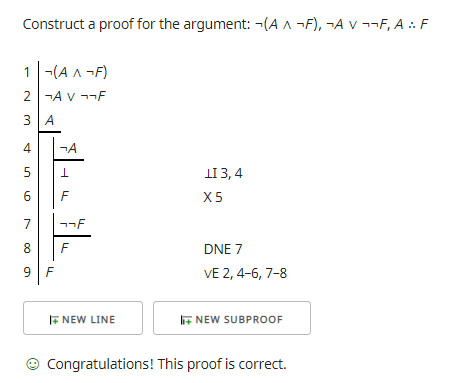 So we have deductively inferred that Mr. N fathered Miss A's child. If he was lying or if there were other evidence that needed to be taken into consideration, then the premises would change and we might deductively infer some other conclusion.

In my opinion we can also infer that he had an affair with Miss A, because he came right out and said so, but since no answer combines I and III, I'm going to assume they don't consider that a "deductive inference" since he just straight admitted to it. This, despite the fact that you can always deductively infer X given X as a premise.

I'd imagine this example is introduced as a foreshadowing of how sure conclusions can be derived from unsure premises --in this case the conclusion "N -> F" where N = "Mr. N is truthful" and F = "Mr. N fathered the child," which is an example of arrow introduction. However, it does puzzle me that they didn't include the more obvious trick answer "Mr. N fathered the child" (which we don't know, given that we can't trust Mr. N's testimony) as one of the options.

Not the answer you're looking for? Browse other questions tagged logic argumentation validity or ask your own question.

4
Is Vallicella's argument that the future tense cannot generate the Liar paradox valid?
6
What is the relation between a conditional sentence and the corresponding universal statement?
0
Is this a valid solution to the liar paradox?
6
What does the truth-value of a material implication represent?
0
Can I deduce from 10 or more complicated premises mentally?
1
Checking the validity of the logical conclusion gleaned from a heated conversation
1
Is Duff's test of failure just the contrapositive of "D intends a consequence of his action if he acts with the aim of producing that consequence"?
1
Is the use of this conditional proposition correct, or does it violate the rules of logic?