What is the difference between 'socialism' and 'communism'?

I frequently hear about these two different concepts. What is the fundamental difference between them?

Is there any religion in this world which had ever tried to establish social equality before ? As all the religion have powerfully and truly established the spiritual equality.

As Engels famously noted in Socialism: Utopian and Scientific that there are multiple approaches to what Socialism is. Some socialisms envisage an ethically appropriate ordering of human relations based on collective economic endeavour of some sort, and good associated cultures, and try to implement that plan. Others envisage the maximal development of working class power, economically and in terms of armed struggle, and that future social relations would be determined by the workers themselves (ourselves) based on their power and analysis while taking action.

Communism is normally used to refer to: utopian 19th century religious communities like kibbutz; or, an envisaged future historical process of the working class abolishing property relations; or, to the actual society of the Soviet Union after the 1940s.

In general these words don’t refer so much to specific ideologies, but are used as labels regarding organised political or economic movements in historical societies. They’re terms of social science more than ordered beliefs. And even the participants in these movements view their own ideas as methods of analysis or action rather than beliefs. The “scientific” approach of socialism as class war is more prevalent than the utopian approach of socialism as ideal ethics.

To expand on the specific difference between “socialism” and “communism” compared in the works of Marx and Engels and a number of those subsequently inspired:

What these constitute vary widely, often depending on support or detestation of the existence of wage labour and the state in the Soviet Union.

In contemporary revolutionary politics the call is often put for “FULL COMMUNISM NOW” such as in the 'Callie On The Roof' comic strip, from Pictures For Sad Children webcomic: 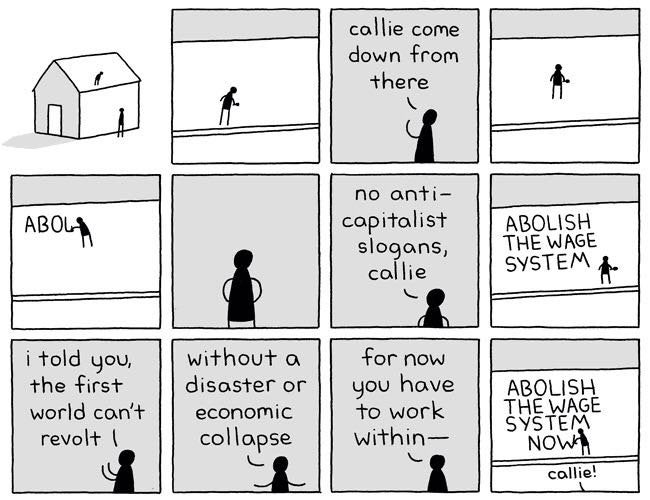 Ie: skipping the intermediate relationship of workers being their own bosses. This is from a historical perspective of workers revolutions, hopeful at best.

For this criteria, Socialism would have a direct democratic state of mandated rotating recallable delegate elected workers councils from the factory floor upwards with the sole monopoly on social violence. (Cf: workers councils in Hungary 1956 especially November 4-December 20). These councils would control goods and service distribution on flat wage bases, much like they would control production and exchange democratically with expert advice and very limited production good only markets.

Communism would lack a monopoly on power, wages, classes, and be working on eliminating required labour entirely.

Ok, first point: Socialism is a term that predates Marx. Socialism began early in the industrial revolution, as a moral reaction against the abuses inherent to of privately-owned industry of the time. The basic idea was that that we should find some social and economic system that focused on the welfare of the community as a whole: in Aristotle's sense that a community was like a ship, and that everyone aboard had to work toward a common goal and a common welfare, or the whole thing would founder and sink. The term 'Socialism' was coined as an opposition to the Liberal 'individualism' that produced destructive competition and the horrific conditions of 19th century industrial life.

Marx picked up the term in the context of his critique of class-based capitalism, and changed the meaning. For Mark, socialism was a system that occurred after working classes overthrew individual-ownership capitalism. In essence, the working classes would remove productive property from the hands of individual owners and entrust it to a state apparatus which would fulfill the managerial role in the working classes' name. The ideal was that the working classes would then be in control of their own productive capacity, because the state itself would be responsive to the needs and interests of the working classes. But in practice (as Marx noted) the state would tend to become a new ruling class that supplanted the class of individual capitalists, and so the system would tend to collapse into dictatorship of one sort or another. Later theorists came up with many different forms of socialism in an effort to offset this tendency — e.g. syndicalism, in which governmental functions were handed off to the leaders of labor unions — but the core problem remained, that socialist systems retained the class structure of manager and worker classes, and thus could not escape the problems of class tyranny.

Communism was Marx's underspecified end-goal: a system in which the concept of 'class' is abolished entirely, so that exploitation and oppression become impossible. One might think of Marx's conception of communism as a form of Liberal democracy stripped of any free market competitive influences, though that's difficult for people in the Western world to visualize.

There have never been any communist nations of any scale. Nations that have called themselves 'communist' have generally been one form or another of socialist dictatorship, in much the same way that many nations which have styled themselves as 'democratic' are in fact autocratic dictatorships. At best we can think of the term 'communist' as aspirational; at worst as mere gas-lighting.

Societies and political systems have generally evolved in proportion to the economics of human population density, in approximately the following order:

I surmise that the default mode is hunting/gathering, triggered by extreme reductions of the human population, regardless of cause (including environmental or natural causes). Then as technology gradually advances with increases in population density, societies repeatedly cycle through governmental structures similar to the ones I have listed here. The higher the population density, the more difficult it becomes to keep society controlled and stable. Until finally, it breaks completely down in anarchy once again. Afterwards, it begins to regain stability again, with hunting/gathering.

It is better to compare socialism and communism relative to the whole framework of possibilities and history, rather than in isolation -- especially considering mrpanchal's original question essentially asked:

Is there [/] could [there] be [a] new ideology above Socialism and communism and capitalism [?]

And I hope that I have answered the question by outlining (to the best of my ability) the natural progression of governmental structures in relation to human population density, over time. I wouldn't say that either fascism or utopianism are necessarily "above" anything, in the sense of being any kind of real "improvement"; only that they are defensive reactions to unbearable social stresses.

Oxford Scholarship Online, The Utopia and Radical Humanism (first chapter in a book by David Norbrook titled "Poetry and Politics in the English Renaissance", in which the author analyzes Sir Thomas More's work)

Wikipedia, "Anarchy, State, and Utopia", by Robert Nozick (1974, a book on the subject of distributive justice and libertarianism)

Here is a basic distinction between Socialism and Communism:

Communism and Socialism share an identical disdain towards Capitalism. Both Communists and Socialists view Capitalism-(in particular, Corporate/Industrial Capitalism), as immoral/unjust, as well as inherently anti-democratic. The major difference between the two economic systems is that Socialism is preoccupied with fulfilling a type of economic justice, whereas Communism-(in its purest, most aspirational and naivest form), seeks to end and even destroy, the existence of ANY Hierarchical system-(whether it is Capitalism or even Socialism). Communism hopes to achieve universal equality of all peoples, through the dissolution of the State and the Industrial Corporation.

So in a way, Communists and Socialists, actually have a more adverse relationship, yet, both economic systems tend to befriend each other, due to their militantly moral opposition to the existence of Corporate Capitalism.

Not the answer you're looking for? Browse other questions tagged political-philosophy or ask your own question.

14
What are prominent attacks of Rawls' "veil of ignorance" argument? Which liberal philosophers have advanced it?
3
What major innovations in social contract theory did Rousseau make compared to that of Plato's Crito?
9
Was Nietzsche influenced by Machiavelli?
6
What underlying principles determine US parties' stands on issues?
3
Is "equality" an virtue in itself or a derivative of envy?
0
Is knowledge intrinsically hierarchical, and if so does that hierarchy have implications for the possibility of anarchy?
5
Axiomatic politics