Is there anything wrong with this argument?

The Constitution of the Russian Federation says, in Chapter 1, Article 1:

The Russian Federation - Russia is a democratic federal law-bound State with a republican form of government.

The names "Russian Federation" and "Russia" shall be equal.

Why is this argument I came up with wrong?

I am curious what you guys think.

The argument you present is correct given the first two statements as premises. From those two statements one can derive using equality elimination and introduction both the third and fourth statement.

To see this, symbolize the names as follows: 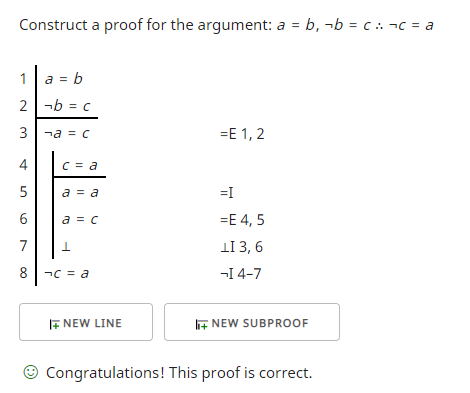 Lines 1 and 2 symbolize the first two lines viewed as premises:

Line 3 results from taking the assumed identity in line 1 and substituting in line 2 b for a. This is the symbolization of the third statement:

Line 8 after going through a subproof shows that the fourth statement using the symbolization above can be derived.

The subproof may require some explanation. On line 5 the identity a = a is introduced. Such a line may be introduced anywhere without reference to prior lines. Using the assumed identity on line 4, I can substitute the second a in line 5 with c to get line 6. This contradicts line 3 which allows me to introduce a contradiction on line 8 which is the desired result.

Not the answer you're looking for? Browse other questions tagged logic argumentation semantics or ask your own question.