Lewis' resolution is based on the distinction that one 'could' (have the physical capacity to) kill his or her grandfather but, ultimately 'would not' be able to do so (without creating a paradox.)

We could consider the Novikov self-consistency principle, which assumes that there is a single timeline (thereby avoiding the many-worlds theory,) in order to argue that one could both have the ability to and realize the eventuality of killing one's own grandfather.

It may seem counter-intuitive since this is the principle that is usually referenced to disprove the outcome of killing one's grandfather (e.g. one would die, or be arrested or the like, before being able to kill his or her grandfather.) However, the universe may still conserve itself within its CTCs by allowing certain situational circumstances. Let's use Lewis' own "Tim the time traveler" for the examples.

For the sake of argument, let's say Tim travels backward in time and kills his grandfather. Despite this, he still continues to exist...

Circumstance A: Tim's grandfather died at a relatively early age.

Vranas didn't seem to like consistency paradoxes either but, he did consider them "worthy of serious scrutiny." (2)

However after analyzing a solution, by Fernando Echeverria and Gunnar Klinkhammer, to the Polchinski's paradox scenario of the Novikov self-consistency principle, Kip Thorne and Robert Forward:

illustrated that for certain initial trajectories of the billiard ball, there could actually be an infinite number of self-consistent solutions. (3) 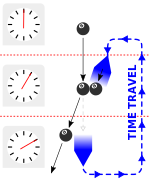 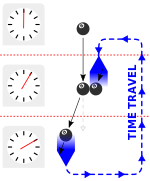 Echeverria, Klinkhammer, and Thorne published a paper discussing these results in 1991; in addition, they reported that they had tried to see if they could find any initial conditions for the billiard ball for which there were no self-consistent extensions, but were unable to do so. Thus, it is plausible that there exist self-consistent extensions for every possible initial trajectory, although this has not been proven. (4)

If that is the case, then any possibility of self-consistency should be examined until it can disproved.

2
Problems with backward time travel
0
What logical fallacies exist in David Lewis and Stephanie Lewis' article called “holes”?
1
Time travel and changing the past
2
John Earman and Time Travel
1
Why is time travel not possible at all?