Is this argument about "either or" valid or invalid?

I have trouble whenever “either or” comes into play. Is this argument valid or invalid, and why is that the case? The “either or” phrase confuses me and complicates the argument to no end.

The argument is valid, and happily this doesn't depend on whether the disjunction is exclusive or inclusive.

Firstly, 'unless' has the same truth table as 'if not', so we have

We are given that

We are also given

But this together with 2 gives by modus tollens

I agree with @Bumble's answer. I offer this as a different way to approach the problem.

Since validity depends on the form of the argument and not the meaning of the English language sentences, the meaning of those sentences may become distracting. It may be worthwhile to abstract away that meaning by creating a symbolization key for the sentences and then checking the validity with a proof checker.

This introduces some risk since the symbolization key may be a source of error. Hopefully it avoids the distraction that paying too much attention to the English language meaning provides.

Here is the argument:

Here is a proposed symbolization key:

Here is the argument using these symbols:

The following proof shows that the argument is valid: 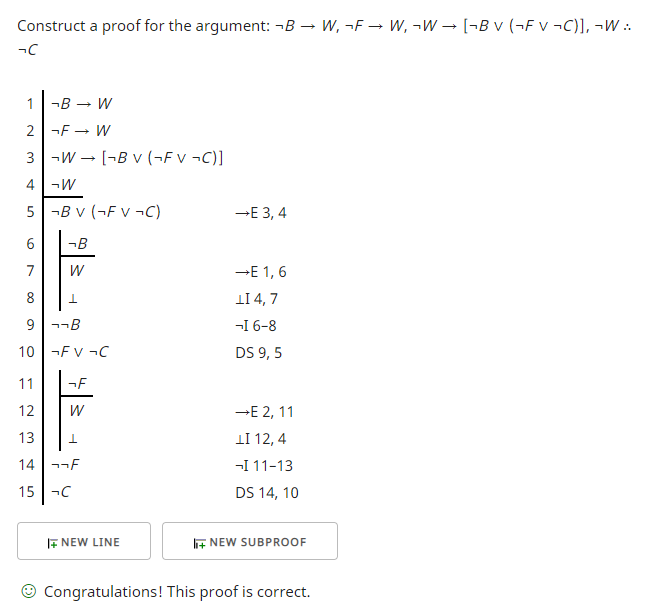 Although in this particular example, using a proof checker may be more difficult than keeping the English language meanings in mind, it provides a way to check one's answer if one is only concerned about the validity of the argument.

Let us translate the argument into its propositional form :

So, the first sentence is (W stands for "Weird") : (~W ⊃ P). What is P here? everything that comes after "occurred," until the end of the sentence.

Now, your main difficulty is with "Either ... or ...", I agree that this is tricky, often logicians use it to mean inclusive "or".

But as the common language is ambiguous here, let us try to see whether it makes more sense with an exclusive or inclusive or. Mainly, is it possible for both disjuncts to make sense together:

The two disjuncts can be true together, there is nothing that prevents that, and if this colloquial argument meant an exclusive or, it would state it clearly. So, it is more likely that this is just an inclusive or

So, the first premise in the argument is :

I did not translate "never" to not-.. since the proposition is used in the negative in both times it occurred in the argument, for simplicity we use C

So, the argument is valid, since we could not make the conclusion false and the premises true.