What are some good English translations of the Brihadaranyaka Upanishad

This translation would be useful https://www.holybooks.com/wp-content/uploads/Brihadaranyaka-Upanishad.pdf 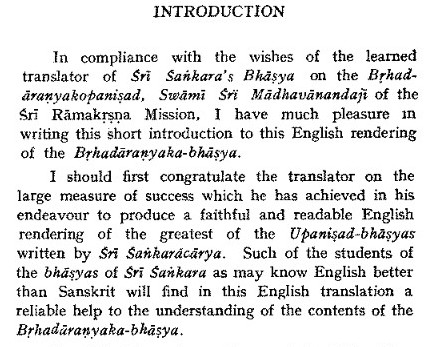 This link would be helpful to know more about Prof: S Kuppuswami Sastri http://worldcat.org/identities/lccn-n50067203/

Another useful translation is here: https://www.consciouslivingfoundation.org/ebooks/13/CLF-brihadaranyaka_upanishad.pdf

Any second hand language has limitations to exactly and accurately translate the eternal meaning of the Upnishadas (Vedas).

To realize the eternal knowledge of the Vedas and Upnishadas, is something sensing beyond these four errors.

The book form of the upnishada in English is also available with the Central Chinmaya Mission Trust, Mumbai. Adiguru Shankaracharya had said to a sanskrit scholar of varanasi, near the end of his life; "bhaj govindam, bhaj govindam, govindam bhaj moorkh/moodha mate..". His grace has explained all the Prime Upnishadas in his own style, however, in authoring the Gita-upnishada mahatmaya, he has said, "ekam shastram devaki-putra gitam...".

11
What are some alternative readings of Aristotle's remark "O my friends, there is no friend"?
6
What are some of the differences between Chinese and Japanese philosophy?
1
Reference request: the Brahma-Sûtra-Bhâshya of Śaṅkara
12
Recommend "best" (see description) English translation of Tao Te Ching
1
How is the sacrifice of Nakiketas in the Katha Upanishad understood in Indian Philosophy?
2
What's the significance of 'Om' in Indian philosophy?
3
How literal or free are Bloom's and Jowett's translations of the Republic?
2
What modern, nonspecialist translations of Boethius, "The Consolation of Philosophy", are available?
1
"Best" English translation(s) of Kierkegaard to read?
7
How, when and why Plato's "Ideas" were changed to "Forms" in English translations?