Can science prove that the earth is not flat?

I've heard Neil deGrasse Tyson and other important scientists say that mature science does not rely on our senses, but all explanations I read about the roundness of earth are sense-based: How a ship disappears on the horizon, how astronauts have seen it from space, the shape of the shadow of an eclipse, etc.

My question is whether or not science has a physical or mathematical model that proves the roundness of the earth beyond what our senses tell us.

PD. I'm no flat-earther, but I'm reading about the holographic principle, and I am a little blown away by it. Thank you.

Question: My question is whether or not science has a physical or mathematical model that proves the roundness of the earth beyond what our senses tell us.

The determination of the curvature of a manifold (a 3-dimensional surface in this case) is a mathematically complex subject that involves tensor calculus. It's difficult to explain it completely in a short page. But to just get a general idea of how this can be done, examples can be demonstrated as follows:

Consider a rectangular coordinate with axes X and Y on a flat plane. The square of the distance between 2 points of coordinates (x,y) and (x+∆x, y+∆y) is ∆x∆x + ∆y∆y everywhere on the plane. It’s also important to note that the unit vector (the vector that points in the direction of the axis and that is of 1 unit of that axis) of X and the unit vector Y are constant in length and direction everywhere on the plane.

Now consider a common coordinate system on the earth surface that’s made up of latitude and longitude (X and Y) axes, that are perpendicular to each other at every point of their intersections and that are parameterized at equal intervals into 360 units (this is arbitrary and may be other numbers) on each axis (see Figure 1). 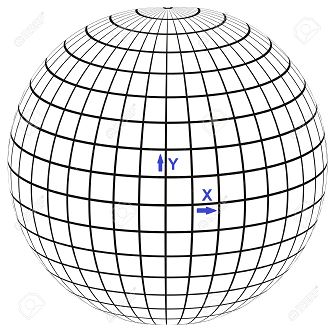 By tedious measurement at a large number of points on the surface, one will be able to determine that the square of the distance between 2 points of coordinates (x,y) and (x+∆x, y+∆y) is [∆xcos(y/r)][∆xcos(y/r)] + ∆y∆y, where r is some constant that can be determined from the actual measurements. (It will turn out that r is, in fact, the length of the earth’s radius!) Thus, just by making measurements on the surface itself, one can determine the differences between a flat surface and a seemingly flat surface (which is, in fact, a spherical surface) of the earth.

The above is the simplest way I can explain this matter. For more comprehensive and additional explanations, I suggest you put this question at the Mathematics Forum. There are a lot of people who are very mathematically savvy there.

There are no references that can explain curvature of a surface completely but are simple and math-free (esp. tensor-free). Some references from Wikipedia here are probably not-so-difficult starters:

Science can prove this very easily. You can prove it yourself in a very nice and convenient way if you're willing to spend say £30,000 for two people for a world cruise, going from Southampton, going west all the time, and arriving back in Southampton three months later. If you have a decent watch, it will tell you how the position of the sun changes all the time, until you have lost a whole day (remember Jules Verne, whose Phileas Fogg gained a whole day by going round the world in eastern direction? )

The problem is that science is not able to prove anything to anyone who is of a closed mind and absolutely unwilling to listen to any evidence whatsoever.

There's two layers to this. The first is the well agreed upon but rarely taught statement that science does not define the reality we exist in. It describes it. Science is defined by the construction of models which permit us to make sense of the world and typically also permit us to understand how our actions might change the world in the future.

For all we know, The Earth was created in the image of His Noodliness. This is I believe the answer you seek. Science does not seek to define anything beyond "our senses." Its up to the philosophy of science to define what our senses really are.

That being said, the models science has created to offer predictions are quite effective. There are thousands of predictions you can make using sciences spherical models which are very unintuitive in any flat earth model I've seen. For example, you can predict how long it takes for planes to travel from one city to another using only their airspeed, and those timeframes are things you can measure using your senses.

At some point people engage in abduction: the assumption that the most likely hypothesis is true. There is such an extraordinary body of evidence that suggests that the Earth is well modeled by a sphere that we assume that the Earth is indeed a sphere.

Oh, and the earth is round, because if it were not round, we could not possibly have spherical cows.

Not the answer you're looking for? Browse other questions tagged reality space or ask your own question.

6
Why can the human mind perceive things that are not reality, despite being born from it?
3
Is it necessary/possible to prove that facts exist?
24
Can we prove reality?
6
Is there a philosophical principle stating that everything that can be imagined can possibly / must necessarily exist?
2
How can we be certain that we cannot be certain?