Can a theory that is now wrong be right in the future?

But what if in the future conservation of energy doesn't apply? Then the theory would be correct (assuming it predicts phenomena, is mathematically formulated etc.)? I mean we reject or accept theories based on “axioms”. (It seems impossible to violate the energy conservation but we just have accepted). Does this mean that we are even in doubt if a theory is right or wrong?

Answer: We (I mean, contemporary scientists) do not take for granted that energy is conserved. The energy conservation law came from observations and experiments. And we do not reject or accept theories based on “axioms”; we do/don’t do so based on the existing evidence. What's more, we always doubt that any currently accepted theory may be wrong. That’s why we always do a lot of various experiments to verify it (i.e., to see if it’s right or wrong).

Scientists nowadays use the method called “Scientific Method” (e.g., see ref 1 and ref 2) to find a theory that can account for the phenomenon in questions (see step 1 to 5 in the figure below). 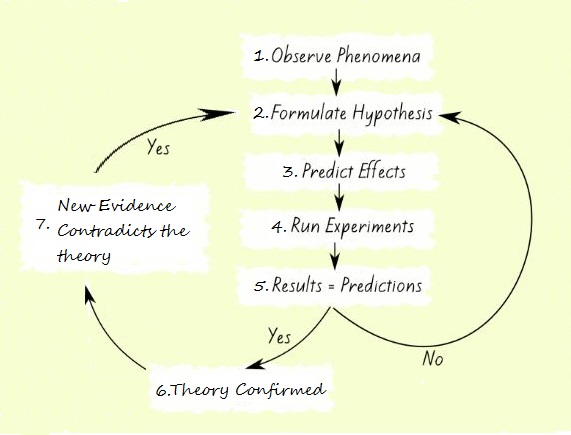 Even if, such a theory (6) is found, continuing experiments and new evidence (7) can disprove it, and a new theory has to be found by beginning the process (2 to 5) again. So, any theory can never be guaranteed to stand forever un-disproved, not even the current thermodynamic theory, Einstein's Relativity theory, or the current quantum theory.

Question: Can a theory that is now wrong be right in the future?

Answer: Yes, it can. This is because the evidence that supports the theory may not exist or because poorly-collected/misinterpreted counter-evidence is found/presents at the time when the theory is proposed. The former case can happen because the evidence exists but has not been found yet or because the technology at the time is not advanced enough to find it. The latter case can happen because the method/technology to collect the evidence may not be correct or the required knowledge to interpret the result correctly does not exist yet. For example, in the 16th and 17th century the hypothesis that the earth revolved around the sun was proposed, but it was proved to be wrong at that time because

“… if the earth revolved around the sun then there should be changes in the relative positions of the stars over the year (see Stellar Parallax ). This stellar parallax could not be observed. Based on this and other 'facts', the scientists of the time were correct to reject the proposed hypothesis. What they did not know was that the stars were far more distant than they thought, billions of kilometres away instead of millions. Given the power of the telescopes of the time, they would not have been able to detect this parallax. ...”

The theory that the earth revolved around the sun was not proved to be correct until the eighteenth and nineteenth century when stellar parallax was finally observed. (from The Scientific Methods)

And, of course, a theory that is now right can prove to be wrong in the future. This is obvious from the figure above (i.e. when conflicting evidence to the theory is found - step 7). Real-life examples are several past theories that are now proved to be wrong, such as the theory that the earth is flat, the Aristotle’s theory of gravity (which states that objects fall at speed proportional to their mass), the theory of light that is exclusively corpuscular (such as Newton’s) or exclusively wave (such as Huygens’), a classical physical theory that holds that measurements of time and distance are absolute and not dependent on observers, and a classical physical theory that concludes that physical events can be definitely predicted.

Re your explicit question, a now-wrong theory is presumably wrong because there exists ubiquitous experimental refutation of its predictions. And that's very unlikely to change (although, very occasionally, the outcomes observed from particular experimental designs have later been found to have originally been misinterpreted). So, basically, "No", a now-wrong theory won't be right.

But, re your example, and as already pointed out, once-right theories have frequently been later found wrong. They originally agreed with the then-available observational evidence, but ultimately disagreed with subsequent observations. In many cases, the original theory turned out to be a sensible approximation to the later-and-better theory. An example where that's not the case is the ancient Greek epicycle theory of planetary motion. Epicycles preserved the idea that the planets revolve around the Earth, but that entire conceptual basis was eventually found completely wrong.

There was that period of time between 1690 and 1801 where Huygens's Treatise on Light (wave theory of light) was considered bonk while Newton's Opticks (corpuscular theory of light) reigned supreme.

I think it is a matter of consensus among the scientific community. Nothing is written in stone and theories are accepted as long they can pass the checkup against the current framework of facts taken as true by the community shaping our conception and knowledge of reality.

Just proving wrong a single fact doesn’t automatically make valid a discarded theory that was based upon the opposite of the fact, it needs to be again compared against the framework to ensure that all conditions are satisfied. In other words, the theory makes sense within the new knowledge about reality.

The more relevant question is whether a theory can be right, or just good enough to explain what we observe.

But what we have observed, changes. If there is an explanation that proves the observed contradiction was only apparent, then our currently inadequate theory might then suddenly be adequate. And if another theory fills the gap, or proves it cannot be filled then this one may suddenly become adequate, too.

An example might be Einstein's cosmological constant. It was inadequate at the time because there was no reason for it, it left an explanatory gap, and it seemed too ad-hoc to be realistic. But now we find there is another force at play, 'dark energy', and it would give a reason for this constant and make the theory less ad-hoc and therefore appropriate.

I suppose that it can be. If a hypothesis is unable to be proven today, or if it goes against established theories without sufficient evidence to overthrow said theories, it will be considered "wrong".

Should the relevant theory be proven wrong by a 3rd party in the future, it is possible that the original hypothesis can now be shown tl be correct, using the new knowledge.

In practice, i don't see this happening, but i suppose that it is a hypothetical possibility

This might not be the most elegant example, but imagine if someone developed a theory that all the ice in Antarctica will melt within 200 years.

I don't know what the actual predictions are, but that might be a viable theory - today.

But suppose someone developed that theory 10,000 years ago. Their theory obviously would have been wrong, but if the theory was proposed again 200 years before Antarctica's ice melted, voila.

7
Will fundamental physics eventually become an aesthetic construction and proceed on aesthetic grounds?
8
Why do we need a reason for believing that inductive method is necessarily true?
8
Stronger evidence for Feyerabend's critique of self-consistency
1
Are there two different mathematics in philosophy?
6
Does phenomenology determine ontology?
15
Can one speak unambiguously of "The" Scientific Method?
1
What's "future research" and how can they know anything about the future?
2
How to reconcile that physicists and science educators use the word "theory" incompatibly?
1
Why a theory is still used after proven wrong?
20
What is information?