Is Kant the first Western philosopher to distinguish between representation and reality?

My limited understanding of Kant is that he distinguishes between noumena 'things in themselves' from mental representations of them as intuition. Is he the first Western philosopher to make this distinction in this way or was there an existing tradition he drew on?

Given that he takes pains to distinguish his conception from the pure idealism of Berkeleys it would appear that if there was, it certainly wasn't well known then.

Kant was the one who introduced the distinction between noumena and phenomena, but if we make abstraction of this terminology and its very specific meaning, I think we can trace this back to the very beginning of Western philosophy. In fact, the distinction between fundamental reality and our perception is very common in ontology.

Please note that my "overview" is far from complete. It is only meant to give some insight into thinkers before Kant who worked on similar ideas.

The Milesians were the first who were looking for the true nature of reality; the fundamental building block of everything. For Thales, this was water, for Anaximander the Apeiron and for Anaximenes air.

Please note that this is still very different from Kant's Critical Idealism. The Milesians didn't say that reality is constructed by the mind (even though Kant's Critical Idealism recognises the existence of a real, objective world, which is necessary for us to see those representations); they only said that there is a fundamental, underlying principle of reality.

Parmenides will have a huge influence on Plato, which will show up in his Ideas and the Allegory of the Cave. 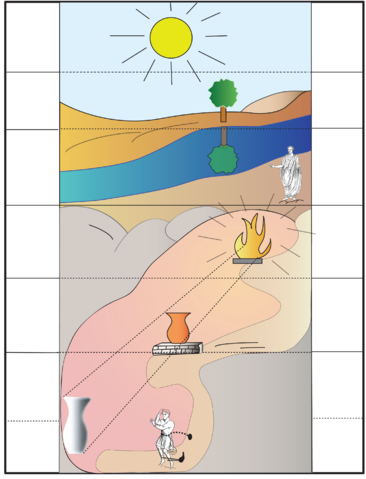 As you can see in the picture above, the philosopher is outside the cave, driven by eros to find real knowledge (compare with Kant's noumena), while the layman is a prisoner in the cave, thinking that the images he sees on the wall (compare with Kant's phenomena) are real, while they are in fact nothing more than imitations of reality onto a wall.

This is why Plato is said to dislike art so much. Consider the Idea chair. When a carpenter creates a chair, he imitates the Idea chair. However, when an artist paints that chair, he is making an imitation (his painting) of the imitation (the physical chair, made by the carpenter); he is, in other words, getting further and further away from the truth.

Note that Plato is also not an idealist; he doesn't say that the mind makes up fundamental reality. On the contrary, his world of Ideas is the world of the unchanging, of being (i.e. independent of minds).

I'm not a philosopher but if I remember correctly, Plato distinguished between ideas and perceptual reality - the things we see, feel, hear, and touch - and argued that the 'real' reality, permanent and unchanging, and 'ideal' - were the 'ideas' - and that our quotidian perceptual reality is merely a pale and imperfect reflection of the world of ideas and that we are like prisoners in a cave, turned away from the light, who see only shadows, and not the ideas themselves, which are, in the sense of the dichotomy only, analogous to the noumena of Kant (of course the 'ideas' are very different from Kant's noumena, but the distinction between the perceptual world and something 'behind' it is, I think, suggestively similar.

Not the answer you're looking for? Browse other questions tagged metaphysics kant or ask your own question.

2
Is Scruton correct in characterising the Transcendental World of Kants?
12
How does Kant assert existence of the noumena, if indeed he does?
1
Is this an example of a true contradiction?
0
Relationship between Western thoughts and "Eastern thoughts"
9
How does plato distinguish between knowledge and belief?
6
Did Kant come to believe that we have access to things-in-themselves after all?
1
What is the relationship between Autonomy and Virtue for Kant?
5
Does Reality change when theory change?
6
Does Kant justify intuitions existing without understanding?