In psychoanlaysis should the id-ego-superego 'configuration' be understood in terms of a historical dialectic?

I've edited this question after Dr Sisters comments on my mis-use of Freudian terminology.

My initial understanding of the mature Id-Ego-SuperEgo configuration is to see them as static. But according to wikipedias entry on this they should have a history:

"the three newly presented entities, the id, the ego and the superego, all had lengthy past histories

It also says that:

Developmentally, the Id precedes the Ego; i.e. the psychic apparatus begins, at birth, as an undifferentiated id, part of which then develops into a structured ego.

That the Id is initially undifferentiated in the new-born seems plausible. But as the Id separates out into the Ego as a consequence of grappling with reality (the Reality Principle), and the Super-Ego separates out of the Ego as an internalisation of authority (the father-figure), or as Freud puts it:

"one part of the ego sets itself over against the other, judges it critically, and, as it were, takes it as its object"

The original unstructured psyche (as the Id) has become structured as the Id-Ego-SuperEgo. Can this differentiation be viewed as a dialectic? The Ego arising as a synthesis between the Id & Reality. The SuperEgo as a synthesis between the Id & the Ego? It rewards & punishes both? That this dialectic is ongoing and creates a history for each part of the Id-Ego-SuperEgo?

I've added a tag for Hegel, as I'm supposing that Hegel described history as a dialectic. I'm not asserting that Hegel had a direct influence on Freud. In passing, it was Chalybaus that characterised Hegels dialectic as Thesis-Antithesis-Synthesis formulation (he himself described his dialectic as Abstract-Negative-Concrete). Chalybaus's terminology is at least more immediately understandable.

My answer would be no.

a static configuration of Id-Ego mediated by a Superego

this is an incorrect statement of Freud's model. In psychology Freud's formulation is often referred to as 'psychodynamic', one emphasising that internal instability is primary to any 'static configuration'. Also The Ego in Freudian psychology is the mediating agency between the striving id and the unachievable injunctions of the super-ego, not the super-ego which mediated the ego-id relation.

Hegel left a huge volume of material for Lacan to have read, I wouldn't necessarily be looking to the dialectic alone in order to discover the origin of his influence. My understanding is that Lacan came to know the work of Hegel much the same as most French people around at that time, through the lectures of Alexandre Kojève. The area i see the closest overlap would be Hegel's conception of negativity and Lacan's notion of lack.

If I understand your question correctly, I would say that history does play a huge part in the balance between the ego, the id and super-ego. 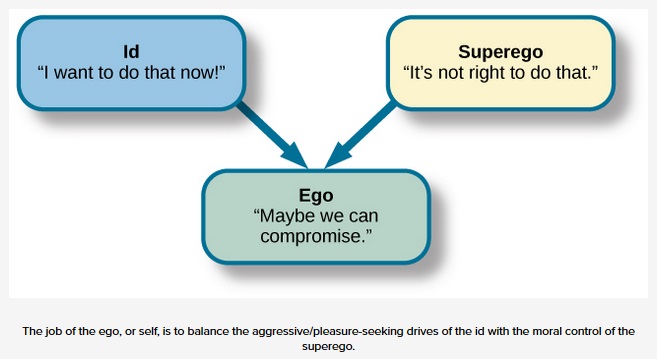 Due to the fact that the superego is the moral centre of the person, a child (or adult) who has been brought up with the wrong societal mores instilled in them, will have a different balance between the superego and the id and ego.

comprises the conscience, a critical faculty instance within the ego, which in normal times takes up a critical attitude towards the ego.

My understanding of this section of the book indicated that the second piece is the Id as it illustrates a psychological need which has been created by loss, and the other piece is the Super-ego. An imbalance between the Id and Super-ego has created the Melancholy and needs rectifying.

Someone (a child or an adult) who has gone through the loss of a much loved pet or member of family, can in time rectify the imbalances between the Id, Super-ego and reality; and then move forward and self-actualise. However, someone who has lost their feeling of self-worth due to trauma for instance, is not going to self-actualise until they manage to get the correct help, support and guidance. The battle between the conscious and the unconscious through the Id, Super-ego, and ego, plus the reality of the situation needs addressing in order for the Ego to help the person to move forward and self-actualise.

Another example I would use is a runaway child needs food and shelter. The shelter part might be more difficult initially, but due to the need for food, the Super-ego can be temporarily suppressed by the Id in order for the child to turn to stealing the food he/she needs to survive. Once this child has done this, the Super-ego can then have it’s say and the child will have the battle in their own head over the morals of what they have done.

Not the answer you're looking for? Browse other questions tagged psychoanalysis hegel or ask your own question.

15
How does Søren Kierkegaard use the word "dialectic" and how does his use of it differ from G.W.F. Hegel's?
2
What are the limitations of Hegels Dialectic that Schelling identified?
3
Is the Kuhnian paradigm shift (or sublation) materialistic or idealistic?
3
How does the Hegels dialectic map onto the Parmenidian dialectic?
6
Questions concerning the Hegelian dialectic