I have two friends - call them John and Jane.

I was recently privy to an argument concerning a book between John and Jane that went like this:

John: This book did not make a single coherent, substantiated point on the topic of t. Do you agree?

Jane: That is not a stance that I hold, given the phrasing used, so I do not agree.

John: Ah, so you do agree with my claim.

(the topic itself is not important)

You can probably imagine how the argument devolved from this point, but something seemed off to me about John's conclusion. I decided to try formulating their exchange as a series of logical steps to check whether John was correct to come to the conclusion that he did after hearing Jane's statement.

This book did not make a single coherent, substantiated point on the topic of t.

I translated this as follows:

For all p in P, it is not the case that Coherent(p) and Substantiated(p).

That is not a stance that I hold, given the phrasing used, so I do not agree.

I translated this as follows:

As Jane is speaking about her personal view on whether she agrees with c or not, we can assume that her statement is true.

Jane tells us that Phrased(c) is false in her rebuttal.

After substitution, her rebuttal becomes:

The inverse of Phrased(c) is true, therefore it is not the case that Hold(c).

Now it seems to me John should not be able to come to the conclusion that Hold(c) is true. Looking at the truth table for inverse logical implication: 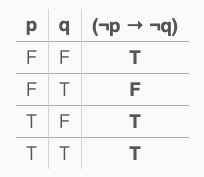 There is exactly one case where ~Phrased(c) is true and ~Phrased(c) -> ~Hold(c) is true: row 1 of the truth table. Therefore, John should have come to the opposite conclusion.

We can even plug these values into Jane's rebuttal and get an English sentence that makes sense intuitively.

There is a little known fact which explains the entire argument. Mathematicians are almost the only people in this world who would understand the logical fallacy committed.

Humans have more than one "equality relation" in our models of thought.

An "equality relation" is a definition of what it means for x and y to be:

Joe's car is the same as Sarah's. The cars are both 2019 Ford Mustangs

... then you just invoked an equality relation.

An "equality relation" is a definition of the equal sign "="

Suppose Joe and Sarah buy two separate cars such that:

Maybe the cars even have the same paint color.
In one sense they are NOT the same car, because at this very split-second moment of time, Joe's car is parked at Joe's house. Sarah's Car, however, is parked at Sarah's place of work.
If x and y are the same car, then x and y cannot be at two different places at the same time!!!
The cars are slightly different in other ways too.
Maybe Joe's car has a small, almost imperceptible tear in one of the leather seat cushions.
Sarah's seat cushions look brand new.
Also, the new cars have different license plates attached to them.

However, the strings are "logically equivalent."

Most people assume there is one, and ONLY one definition of "="
THAT IS A FALLACY!!!
In your story, that is the fallacy John committed.

John: "The truth" is "This book did not make a single coherent, substantiated point on the topic of t. Do you agree?
Jane: That is not a stance that I hold, given the phrasing used, so I do not agree.
John: Ah, so you do agree with my claim. Jane: No, that's not what I said.

Let us symbolize it, shall we?

The following two statements are equal by equality relation tilde (~):

You could define = to mean "agree for the most part."

John: I think X
Jane: I, at least, very slightly disagree with X
John: Ah! So you agree with X! Jane: No, that is not what I said! I said partially disagree!

John: I am black
Jane: I am grey
John: Ah! So you are are black too!
Jane: No, that is not what I said! I said grey not black!

Note.... John lives in a black and white world which has no shades of grey.

John: This book did not make a single coherent, substantiated point on the topic of t. Do you agree?

Jane: That is not a stance that I hold, given the phrasing used, so I do not agree.

John: Ah, so you do agree with my claim.

Is Jane's rebuttal, as you construe it, true? That,

I read this as

One might guess that Jane is saying that to judge a phrase as true or false we need to understand what that phrase means. That seems reasonable, but I have no idea what it has to do with "consistent views" "holding" etc..

3
How to distinguish premise in an argument
1
The logical and psychological differences between the conjunctions "and" and "but"
7
Why is Tarski's notion of logical validity preferred to deductive one?
1
The validity of the definition of a valid argument
10
Is one commiting the "argument from authority" fallacy and/or the "consensus fallacy" when one refers to a scientific consensus when asserting truth?
3
Does an implied premise mean a formal fallacy if used in deduction?
0
Symbolization and Evaluation of Some Simple Sentences