Can the Universe Be Infinite?

Some think that the universe is infinite. To convince one in the creditability of the idea they point mainly at our inability to conceive of its spatial limits. Hence, here, I use 'infinity' (of the universe) just the same way--namely, no finite number can measure it.

So, can the universe be infinite or in other words, can the idea of our inability to imagine the universe's spatial limits be viewed as a counterbalance to that of the unity (universal laws) of the universe? 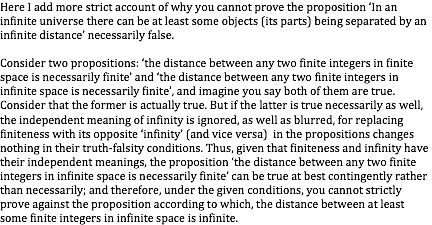 There are several major assumptions here which you haven't justified (and which I don't see how to justify):

there would be infinite parts infinitely removed from one another.

given the limited speed of the interaction between the objects (parts) of the universe, there would be infinite parts of the universe infinitely isolated from one another, so that the universe is very likely to cease to maintain its unity and thus, to hold universal laws

Wy should parts of the universe infinitely far apart (even if such exist) behave significantly differently from each other? (Also, what does "unity" mean here?) And this is ignoring the possibility of physical interactions which don't depend on distance - there's nothing a priori impossibile about two objects sharing a relationship despite being far apart from each other in space.

Here you seem to be conflating knowledge with truth - the universe may have fundamental properties which we can never know, and while that may be annoying there's nothing wrong with that a priori.

The question of whether it's possible for the universe to be infinite is very hard to even phrase precisely, let alone answer. But certainly I see no serious objection to that possibility here, nor am I aware of such. So I believe the answer to the title question is:

Not the answer you're looking for? Browse other questions tagged metaphysics universe infinity or ask your own question.

2
The digital universe.
6
Can there be an infinite regress of Creators?
9
Limitless Space
3
Infinite Divisibility: Zeno v Hume
6
Infinite past with a beginning?
7
Hume on infinity