Why did Nozick write both 'different' and 'differential' in the same paragraph?

Nozick obviously wasn't discussing, and I'm not asking about, the calculus or mechanical meanings of 'differential'. ODO doesn't distinguish them; 'different' is synonymized with 'differential', and vv.

In contrast to end-result principles of justice, historical principles of justice hold that past circumstances or actions of people can create [1.] differential entitlement or [2.] differential deserts to things. An injustice can be worked by moving from one distribution to another structurally identical one, for the second, in profile the same, may violate people’s entitlements or deserts; it may not fit the actual history. 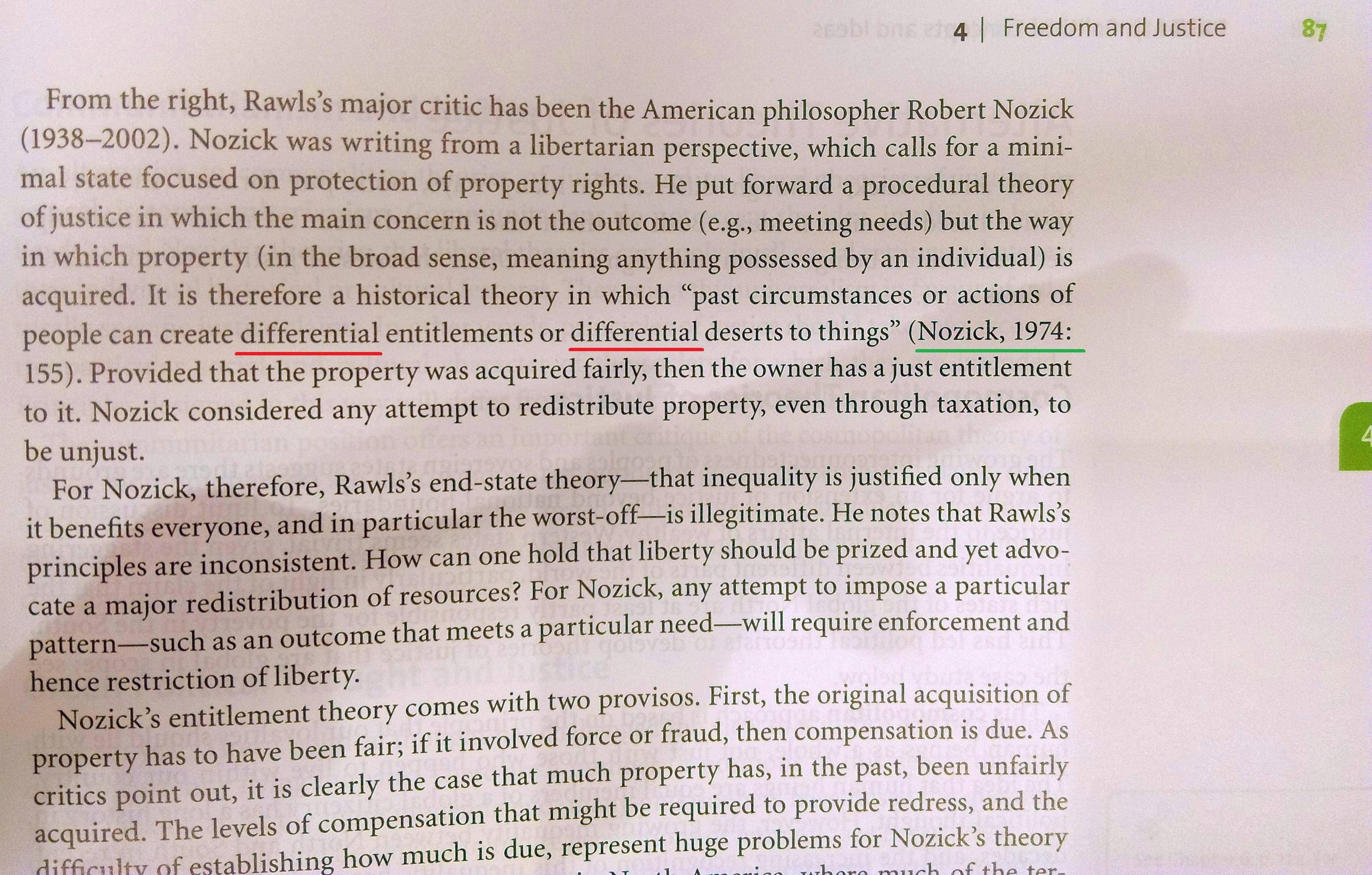 From the right, Rawls's major critic has been the American philosopher Robert Nozick (1938—2002). Nozick was writing from a libertarian perspective, which calls for a state focused on protection of property rights. He put forward a procedural theory of justice in which the main concern is not the outcome (e.g., meeting needs) but the way in which property (in the broad sense, meaning anything possessed by an individual) is acquired. It is therefore a historical theory in which "past circumstances or actions of people can create differential entitlements or differential deserts to things" (Nozick, 1974, [Anarchy, State, and Utopia]: p. 155). Provided that the property was acquired fairly, then the owner has a just entitlement to it. Nozick considered any attempt to redistribute property, even through taxation, to be unjust.

For instance, if I say that I give differential treatment to my students, that means that I am discriminating between them in some (not necessarily bad) way. I might be, for example, grading students less harshly because I am friends with their parents. That would be a case of differential treatment. On the other hand, if I say that I give a different treatment to my students, that by itself does not suggest that I am discriminating between them. Moreover, it sounds incomplete: different from what? Is it different from how other teachers treat their students? From how I treat my colleagues? And so on. To capture the original meaning without using 'differential' I would have to say something like: different students get different treatment. But using 'differential' is shorter.

Background: To be able to understand Nozick, you have to keep in mind (1) his tracking theory of knowledge, (2) his position on how to trace the truth no matter how varying through time conditions are i.e., differential quality and (3) his ideas from Invariances where he clearly demonstrates an evolutionary vision about the truth concerning time and space, while holding against concepts like the timelessness of truths. Nozick always highlighted the (underlying) presence of time and how it determines structures and objectivity.

Answer: In this frame of reference, I see differential strongly tied to history in the sense of the flow of measurable changes as a way of tracing and determining how the course of circumstances and actions create variability in what historically can be defined as concepts of original entitlement and original deserts to things. Such rearrangement from a distribution structure to another is what Nozick considered to create (as a possibility of) violation of these two concepts just at the moment they stop satisfying any definition based on their historical context. Patterning, when not linked to historical principles of justice, is an artificial design subject to outcomes or end-result policies that distort the historicity of entitlement and deserts to things concepts. Thus, there is indeed bias or misstatement even though the context is just about compulsory taxation on a justly acquired property and it is on a par with the use of force, e.g. the weighted sum of moral merits is the process of moving the conceptual structure of a personal property to be considered statistically on an underlying aggregate or group

'Differential' in this context means differences in outcome based on some natural or well-ordered dimension or dimensions. For example, innate differences in size and physical strength predicate differential outcomes for people pursuing a professional football career; pre-given differences in parental wealth predicate differential access to educational opportunities. By itself this is fairly common-sensical: different people have different skills, lucks, resources, and talents that make them non-interchangeable. The world's greatest brain surgeon might fail miserably if she tries her hand at painting or philosophy, while most artists and philosophers would fail miserably at brain surgery, and that's just normal.

What Nozick is trying to suggest in this snippet is that historical contexts sometimes create differential entitlements or deserts. To give an unambiguous case, let's say that someone discovers a deserted island that happens to have a vein of gold. He goes in, set up camp, digs a mine; he is entitled to do this because of that historical accident of discovery, and he is entitled to enjoy the fruits of the sale of that gold. The fact that this creates a differential of wealth — he has lots of gold while other people do not — is justified by that historical event.

In Nozick's view, the mere fact of difference — that one has more and another less — is not a moral ill. The mere fact of difference does not take into account historical patterns that might explain and justify the difference as valid. We cannot simply point at (say) the fact that women earn 70% of what men in equivalent positions earn and say that this entails a social or moral ill, because there may be some dimension of gender differences which creates a historical context in which that pay differential is a normal and correct distribution. We certainly (in his view) cannot take steps to redistribute part of that 30% back to women.

Of course, this highlights the problem with Nozick's position. The status quo is the de facto historical context in which we all work, and Nozick's argument too easily boils down to an assertion that any attempt to alter the status quo is an injustice against those who profit most from it. Note the coy way in which he distinguishes between 'natural' patterns (assumedly those which have naturally occurred) and 'artificial' patterns which are 'gimmicked up' (by which he can only mean theoretical patterns that are critical of the status quo's historical context). Nozick is essentially using the concept of historically derived 'differentials' to normalize differences that people find objectionable. But this isn't really he place to get into a full critique of Nozick's work.