Is this a good argument that mathematics was invented?

If one claims that although a stock option was invented, the black-scholes equation can be said to be discovered, how many more mathematical theorems, equations, models and so forth are out there that are waiting to be discovered, dependent on our future "inventions and creations"?

Do we use the natural numbers to count stones, spoons or iPods? Here are only a view of the applications of mathematical model called harmonic oscillator.

The mathematical structure behind these equations, or more directly the algorithms to solve the associated problems, can be described by any sufficiently strong programming language. Given a finite alphabet we can enumerate all the programs in a language.

So what is being introduced in the stock market business is the application. This shifts the problem away from the onthological problem for mathematical entities.

Boiling water and eggs are there. You can now argue about if the application of water to cook a breakfast is invented or discovered. I lean towards the latter.

I don't think the Black-Scholes equation is very special, except for being spectacularly overrated.

This is an interesting titbit. 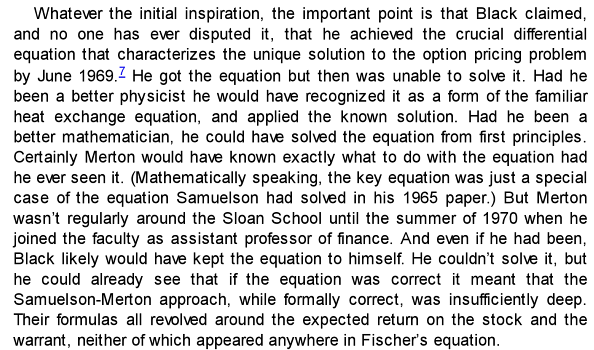 The heat equation arises in the modeling of a number of phenomena and is often used in financial mathematics in the modeling of options. The famous Black–Scholes option pricing model's differential equation can be transformed into the heat equation allowing relatively easy solutions from a familiar body of mathematics. Many of the extensions to the simple option models do not have closed form solutions and thus must be solved numerically to obtain a modeled option price. The equation describing pressure diffusion in a porous medium is identical in form with the heat equation.Diffusion problems dealing with Dirichlet, Neumann and Robin boundary conditions have closed form analytic solutions (Thambynayagam 2011). The heat equation is also widely used in image analysis (Perona & Malik 1990) and in machine-learning as the driving theory behind scale-space or graph Laplacian methods. The heat equation can be efficiently solved numerically using the Crank–Nicolson method of (Crank & Nicolson 1947). This method can be extended to many of the models with no closed form solution, see for instance (Wilmott, Howison & Dewynne 1995).

I think the invention/discovery dichotomy/question is more concerned with whole new areas of mathematics, not specific equations.

The Black-Scholes equation describes the price of a stock option over time.

is true in the Black-Scholes model, but not in reality/actuality.

It is a bad argument because the premise is false, the price of stock market options over time is not invented.

Stock market options are indeed an human invention. But their price evolution depends partially on the behaviour of individual humans. Such behaviour is partially designed. Laws and regulations try do do so, but only with partial success. Part of such behaviour is also designed by individual humans or groups who make their plans as they see fit, but these humans/groups are not coordinated and the overall result lacks design; furthermore these plans are not always followed by their makers. There are also humans who buy/sell on a whim.

It also depends on natural phenomena. Good weather may raise the price of stock options for a distributor of crops.

So, the Black-Scholes equation is describing, with a certain degree of acuracy and imperfection, the evolution of the price of stock options, and such evolution has not been designed or invented.

If one claims that although a stock option was invented, the black-scholes equation can be said to be discovered, how many more mathematical theorems, equations, models and so forth are out there that are waiting to be discovered, dependent on our future "inventions and creations"?

Chemistry is branch of science dealing with atoms and their interactions with atoms. Mathematics is successfully applied in chemistry. In the current history of our universe, we have atoms. In the past we didn't have. But once and after we have atoms, we have the very "natural"/ "physical" world of atoms and science of chemistry where mathematics play a successful role.

Similarly, in the history of our universe, we now have humans (in the past we weren't around). Once we have humans, we eventually (despite not necessarily) have stock-options and that mathematics aplies to stock-options is no different that it applies to chemistry only after atoms created in the natural evolution of the universe. So the question would be re-stated as follows : "That mathematics aplies to atoms prove that math is discovered/invented?" To me, stock-exchanging is yet-another area where mathematics applies to natural world. I guess this yet-another-example do not contribute to discussion whether math is invented or discovered...It proves or disproves anything, or it implies no more than the fact that chemistry uses mathematics to describe atoms and molecules.