How can one explain this conflict between philosophy and classical physics? [duplicate]

Consider two moving objects along X-axis direction with different speeds and different initial starting points. Let the initial distance of the objects be d0 and v1 is greater than v2 i.e v1>v2. 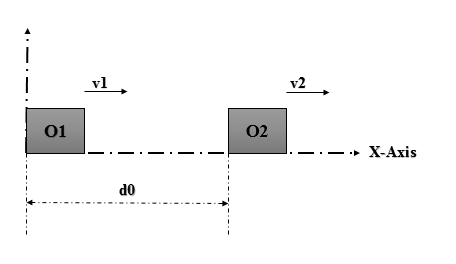 and O1 because of its greater speed will eventually reach to O2.

But philosophy says something else:

By repeating this procedure tn and xn approaches to zero but does not become zero, therefore O1 will never reach O2.

How do you explain this?

Thank you so much.

The task the OP presents is similar to the Achilles and the Tortoise presented by Zeno in Plato's Parmenides. A task which can be completed is divided into an infinite series of smaller tasks which now cannot be completed.

Nick Huggett describes this as a "supertask" and offers the following resolution based on M. Black's "infinity machines" (‘Achilles and the Tortoise’, Analysis, 11: 91–101):

Supertasks: A further strand of thought concerns what Black (1950–51) dubbed ‘infinity machines’. Black and his followers wished to show that although Zeno’s paradoxes offered no problem to mathematics, they showed that after all mathematics was not applicable to space, time and motion. Most starkly, our resolution to the Dichotomy and Achilles assumed that the complete run could be broken down into an infinite series of half runs, which could be summed. But is it really possible to complete any infinite series of actions: to complete what is known as a ‘supertask’? If not, and assuming that Atalanta and Achilles can complete their tasks, their complete runs cannot be correctly described as an infinite series of half-runs, although modern mathematics would so describe them. What infinity machines are supposed to establish is that an infinite series of tasks cannot be completed—so any completable task cannot be broken down into an infinity of smaller tasks, whatever mathematics suggests.

In my opinion, the underlying fallacy of your argument is that you assume that because you have described the motions as divided into an infinite sequence of sub-motions, then somehow they actually ARE divided into an infinite sequence of sub-motions. This is not true; there is only a pair of objects moving continuously. Just because you can mark an infinite number of times before time 't', that doesn't mean the left object won't keep moving up to, through, and past time 't' - and what happens then, eh?

Philosophically speaking, a paradox (like the version of Zeno's paradox outlined here) is not meant to show that there is something wrong with the world. It is meant to show that there is something wrong with our understanding of the world. Zeno was not disputing that motion was possible, since it self-evidently is. Zeno was pointing out that the mathematics of his time (and to a certain extent, of our own time) has real difficulty with holistic concepts like movement. Mathematics (and mathematical physics in particular) tends to deal in moments — reductions to simplified instantaneous states — and extending moments across time is always problematic.

Note that part of the genius of Newton's calculus is that he chose his moments as the average of small time slices instead of single points. Using a small time slice allows us to approximate the slope of a curve over that time slice capturing a relationship between change in time and change in position, although it invokes an infinite regress of its own as it requires ever smaller time slices. Newton didn't so much solve Zeno's paradox as find a way of using it productively.

The reason that Zeno's Paradox is no paradox to a physicist is as follows.

Physicists have at their disposal a tool that Zeno, and perhaps other philosophers who are alive today, do not: it is the precise idea of the rate of change of a variable, which in coarse language is the slope of a line which is eventually arrived at by breaking a (slanted) line up into a series of discrete stairsteps of ever-decreasing size.

This mathematical concept comes to us from differential calculus which was not invented until after Zeno had been dust for centuries.

But Zeno wouldn't have needed calculus as such to resolve his (seeming) paradox. Had Zeno been able to make a simple chart with distance on the x-axis and time on the y-axis, his example of the tortoise and the hare would show on the chart as a pair of straight lines where the slope of each is the velocity, or rate of change of distance with time, for each animal, and their intersections with the x-axis represent their starting positions in their race.

He would then see that those lines have an unambiguous crossing point, representing the instant in time at which the hare passes the tortoise, and that there was actually no paradox at all embedded in the problem.

Not the answer you're looking for? Browse other questions tagged philosophy-of-science zeno-of-elea or ask your own question.

22
Why is Aristotle's objection not considered a resolution to Zeno's paradox?

16
Is time a physical factor or just a concept?
3
What sort of philosophy asserts the speculative identity of zero and infinity?
1
How does one explain (apparent) nonexistence?
4
what is the difference between classical political philosophy and modern political philosophy?
1
How can Science, Religion, Theoretical Philosophy, and Spirituality be compatible / not cause conflict with each other?
3
How to believe physics and treat scientific knowledge?
8
To what extent was Galileo's trial a conflict between science and religion?
5
The conflict of creationism and evolution. How can we know the truth?