Prove by rules of inference. if a Ghost is an imagination. Is a ghost ferocious? Is it carnivorous?

Although I was able to write the premises, I can't solve it either way. Please help!!

Here are the premises:

Let's use the following symbolization key from which we will construct the statements in these premises.

Here are the premises:

Here are the goals:

Prove by rules of inference. if a Ghost is an imagination. Is a ghost ferocious? Is it carnivorous?

Using the symbolization key one can write these as follows:

Putting both into a Fitch-style proof checker one gets the following: 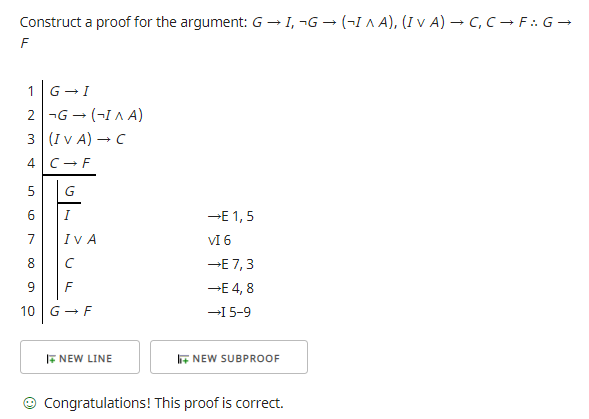 The first four lines are the premises. Since it is a conditional that I want to show, G>I, I assume the antecedent of the conditional on line 5. I want to derive the consequent, F. This is indented because it is a subproof starting with an assumption that I will have to discharge later.

By the first premise and my assumption I can use modus ponens or conditional elimination (→E) to derive I on line 6.

By disjunction introduction (vI) I can create an "or" statement from line 6 having just what I need to use the third premise on line 7.

On line 8, I use the third premise and line 7 with the modus ponens inference rule again to derive line 9.

At this point I have a subproof starting with G as an assumption and ending with the derived statement F. I can close that subproof by introducing a conditional on line 10 giving me what I want: G > F.

Note that if I stopped the subproof earlier I could also derive G > C.

3
Prove P v ~P using most basic rules?
0
Question about information in ampliative reasoning
6
The difference between argument, inference, deduction and proof?
2
How do I solve this formalized argument by drawing conclusions from inference rules?
1
How do you prove A <-> C given the following premises?
3
Inference vs. Reasoning
1
Modus Ponens as Substitute for Syllogism
4
Why is it argued that an argument has one and only one conclusion?
0
Reasoning for Inductive inference?