What is the difference between a premise and an assumption in logic?

It seems to me that an assumption is an untold premise in my argument. Is it right?

Perhaps the main difference between what might be called a premise and an assumption by different authors is their use in a proof with inference rules. Here is an example of this difference in a natural deduction proof using a Fitch-style of presentation. 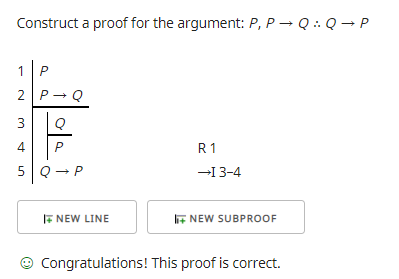 Note that the first two lines above the horizontal line could be called either premises or original assumptions. One can use these sentences without deriving them to help derive the goal.

Regardless of this use, one should consult the definitions of these terms in whatever logic textbook one is using. Here is how the forallx textbook describes such a subproof. Instead of P and Q, they use A and B: (page 107)

For these authors, premise and assumption appear to be nearly synonymous: (page 98)

A formal proof is a sequence of sentences, some of which are marked as being initial assumptions (or premises).

A premise is a statement which is assumed as true for the purpose of an argument, where the conclusion will be considered as following from the given premise (see note on assume).

As such a premise may be actually true or actually false. In many cases, it doesn't matter for the purpose of the argument whether the premise is true or false. We just need to be able to assume that it is true because we may be only interested in whether the argument is valid.

An assumption is usually understood as something else altogether. To confuse the matter somewhat, the noun "assumption" has the same origin as the verb "to assume" (13th, from Latin assūmptiō, the act of taking up, from Latin assūmere, which is ... to assume).

So, making assumption and assuming a premise may seem to mean the same thing. However, you assume a premise for the purpose of an argument and the premise is explicit.

And assumption is usually understood as a proposition taken for granted or accepted as true without proof.

It is routine for philosophers to talk about looking for hidden assumptions. Suppose your conclusion happens to be falsified one way or the other. Then the advice is to look for a hidden assumption that may need to be reconsidered.

The difference is rather slim, though.

We tend to talk of premises in the case of arguments considered in the context of discussing logical validity, somewhat like Aristotle discussed the validity of his example syllogisms.

In this context, premises are usually all explicit statements but in the case of enthymemes, one premise is usually left implicit. However, in this case, the implicit premise is normally absolutely obvious.

Suppose for example that some guys in a bar are talking about Barack Obama. After ten minutes, one of the guy says, "Yeah, well, politicians, they're all liars anyway", or something more colourful. Everyone listening to that will understand the libellous implication even though it isn't spelled out, and even though one premise, that Obama is indeed a politician, has been left out.

Nobody would talk of an assumption in such a case. Everybody present knows Obama is a politician. It's not an assumption, it's a fact. But it is nonetheless a premise and the premise is left out in such cases because we all understand what is meant without the need to spell it out. To spell it out would be somewhat counterproductive, like wasting everybody's time asserting trivia and thereby compromising the punch of the conclusion. Essentially, you let people draw the conclusion by themselves, which is an effective way of implicating them into your argument and into accepting the conclusion.

An assumption may be consciously hidden to avoid drawing everybody's attention on it if you think most people won't accept it. And we also all make arguments for ourselves when we reason and we usually can't possibly identify all our assumptions, hence the need sometimes to look for the one which may be false.

This also explains why philosophical arguments and debates are necessary, to draw out the assumptions that would remain otherwise hidden.

All philosophical views are based on any number of assumptions and usually it is impossibly to make them explicit. Which is why Leibniz worked on a calculus ratiocinator, a theoretical and universal method of logical calculation to solve the problem of endless and inconclusive philosophical debates.

Well, we are still having endless debates.

We may also use an argument where we assume the premises as true even though we believe they are in fact false, and this to show that the conclusion implied by the premises contradicts a belief held by someone who also believes the premises true, thereby proving that this person holds two beliefs that contradict each other, and possibly that therefore this person is irrational.

That we assume premises is demonstrated by the fact that we start all arguments by asserting the premises, and this without any condition, unlike the conclusion of the argument, which is asserted only under the condition of the premises assumed as true.

The differences are subtle and the terms are often used interchangeably, but if one wants to make a distinction, it is roughly as follows:

Premises are those statements on which the conclusion of the argument depends, that is, the "if" part, provided the argument is of the form "If A1, A2, ..., hold, then B holds". Of course, we also have tautologies which don't depend on any premises.

As a simple example, let's consider the following argument:

An informal proof of this argument could look as follows:

There are two cases to consider:
1) Assume P. With the premise P → Q, by modus ponens we have Q.
2) Assume ¬P. Modus ponens on the premise ¬P → (Q ∧ R) gives us Q ∧ R. From conjunction elimination it follows that also Q.
Since Q follows from all cases, the conclusion holds.

The proof presented here is a proof by cases: The law of the excluded middle tells us that either one of P or ¬P must hold, and if we can show that in any of those cases we can derive Q, then we know that Q holds no matter which out of P or ¬P is actually true. Throughout the proof, we made two assumptions: First we assumed that P holds, then we assumed that the negation holds.
Eventually, it does not matter which of these assumptions actually holds: The only statements on which the truth of Q depends are the premises P → Q and (Q ∧ R). If the premises are true, then the conclusion is true, whereas we don't care if P or ¬P is true, as the conclusion follows in any case. So the conclusion depends on the premises P → Q and P → (Q ∧ R), but not on the assumptions P and ¬P. The assumptions were only needed temporarily within the proof.

The same reasoning carried out in a formal proof (here: in Fitch style natural deduction) could look as follows: 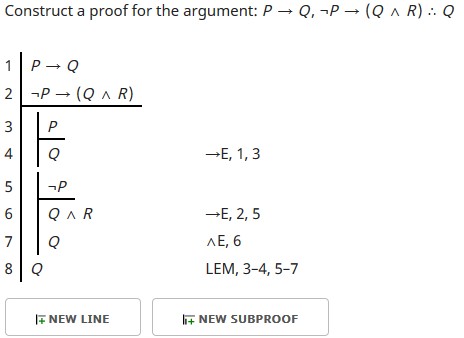 Note, that assumptions do not need to be only temporary hypotheses which later on get discharged -- assumptions may remain open, so any premise is also, in a way, an assumption. Open assumptions are precisely those statements on which the conclusion depends. Here I'm using the terminology "open assumption" and "premise" more or less synonymously. Some people might want to make more fine-grained distinction between the two, but in practice, they will be used pretty much interchangeably.

As another example, let's consider the argument modus tollens:

P → Q and ¬Q are the premises, and ¬P is the conclusion of the argument.

An informal proof could look as follows:

Assume the negation of the conclusion, i.e. assume P. With the premise P → Q, by modus ponens we can derive Q. But this is a direct contradiction to the premise ¬Q. Hence, the assumption P must have been wrong, and we have that ¬P.

Formalizing this argument in Fitch will look as follows: 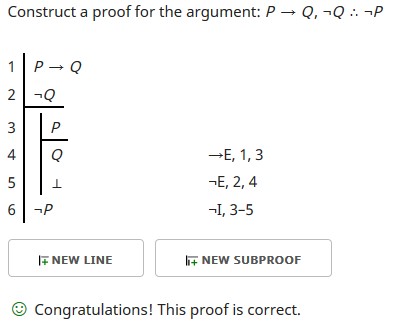 Again, the subproof is closed and the assumption P discharged at the point where we apply negation introduction to conclude that P couldn't be true as it leads to a contradiction. Again, everything above a horizontal bar is an assumption, which is the formulas P → Q, ¬Q and P in this case. Only P → Q, ¬Q remain open by the time we reach the conclusion ¬P, meaning that the truth of ¬P depends on the truth of P → Q and ¬Q, which are the premises.

Not the answer you're looking for? Browse other questions tagged logic propositional-logic or ask your own question.