Authors on consciousness and its relation with suffering

Let's say we take a group of volunteers willing to receive a 120V discharge under fMRI scanners. They all may receive the same intensity but how can we know that they all recieve the same amount of suffering and what makes some people more tolerant to pain than others? ref here and here.

Altered states of consciousnesses produced by natural means (deep meditation, hypnosis) seem to have relation with the level of suffering and physical pain the subject may endure nevertheless there is no much scientific literature on the subject. eg. Hypnosurgery has not been backed up by mainstream science but there seem to be successful cases. ref here

Some Buddhist monks have immolated themselves to protest for prosecution in Tibet, Vietnam and other places. They seem to enter a deep state of meditation and once the immolation starts they don't show any signs of physical pain. 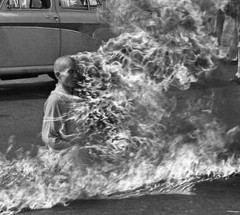 Are there any credible sources investigating the nature of consciousness and its relationship with suffering? Is it possible that brains are just receptors of it because it exists independently? Do we have the freewill to detach our "consciousness" from our mind and body? Isn't that what most religions and spirituality through history have been about?

"Enlightenment is not suffering" Buddhist proverb

John 8:32 "And ye shall know the truth, and the truth shall make you free"

"There is no coming to consciousness without pain" Carl Jung

You are making a category error, between physiology like pain, and mental experience like suffering. Say I cut your legs off, but made sure using anaesthetics you never felt any pain, at the time or later. You might still be expected to suffer, knowing the things you could no longer do.

""Monks, even if bandits were to savagely sever you, limb by limb, with a double-handled saw, even then, whoever of you harbors ill will at heart would not be upholding my Teaching." - the Buddha, in the Parable Of The Saw, MN21.

The core teachings of Buddhism are about going beyond suffering, about ceasing to be coerced by physiology like pain, into behaviours that cause suffering like hatred. This passage indicates to how radical a degree the teaching aims to decouple these.

Boredom is usually considered suffering, and of a kind related to the capabilities of the bored person in some way. Research suggests that around half of people will give themselves painful electruc shocks just to alleviate boredom https://www.bbc.co.uk/news/science-environment-28130690 So it's interesting to note that vipassana meditation seems squarely aimed at a way of using the mind in which boredom is absent. Boredom pushes us to use and develop our capacities, but can also be very problematic - long solitary confinement for instance being associated with deep trauma, and for most societies remains the most severe punishment available.

Schopenhauer and Cioran are among the philosophers with particularly interesting takes on suffering. It seems your concern is more with pain though.

That said, great Christian (and Jewish and Muslim) saints could just as easily be found who had understood some "trick" about consciousness that puts them outside the pale of (normal) human suffering.

Evan Thompson "Waking, Dreaming, Being: Self and Consciousness in Neuroscience, Meditation, and Philosophy"

Thomas Metzinger, "The Ego Tunnel: The Science of the Mind and the Myth of the Self"

Richard Davidson, "Altered Traits", "The Emotional Life of Your Brain"

Deep Brain Stimulation has succeeded in treating some specific cases of Major Depression. ref here The set of experiments by Milner & Olds on rats proved that the areas of the brain responsible for pleasure could be endlessly stimulated (until they died of thirst) ref here

It seems the that DBS will provide a tool to manipulate the human physique at will. There is no much literature on the altered states of consciousness produced by deep meditation and hypnosis and there seem to be no recent research on this topic.

3
Goal of liberation in yoga - Isn't it Boring?

2
Should any definition of "consciousness" include its sexual reproduction?
8
What are book recommendations on Philosophy of Consciousness by contemporary authors?
3
Resources for learning about philosophy of mind and consciousness
2
Authors on "the Trouble with the Revolutions of the Mind"
6
Wanted references to the Phillip K Dick Total Recall (1990) paradox
0
Are neural correlates of consciousness and immortal souls compatible?
3
Relation between freewill and conciousness