Why does the Principle of Explosion not make Mathematical Logic inconsistent?

The above seems to show that we can correctly derive both P and ¬P thus making mathematical logic inconsistent. I always thought that the principle of explosion is ridiculous.

The answer to this question seems to be that we can't ever derive the kind of contradiction that POE needs from RAA so inconsistency is never derived.

It seems to me that a contradiction in inference is essentially the same thing as dividing by zero in computation. This makes it seem quite foolish to proceed onward with inference to explosion. Why is POE not abolished?

Why can't we simply get rid of the Principle of Explosion?
The updated rule would be that inference halts at after contradiction in exactly the same way that computation halts when divide by zero occurs. POE is simply not the way that human reasoning really works. In courtroom testimony a contradiction indicates perjury.

@DanielPrendergast says:
"Well, you'll have to get rid of one of the following: Distjunction introduction A ⊢ A V B"

Yes that one seems to be a good one to get rid of.
A="I like ice cream", B="Donald Trump ate an office building".

The answer to this question seems to be that getting rid of POE requires us to get rid of disjunction introduction which seems like an utterly useless appendage.

Explosion is a property of logical consequence relations, and thus of logics, that is not trivial: Some logics have it, some don't. So there is simply no sense asking

Why can't we simply get rid of the Principle of Explosion?

If the logic you start with, say classical propostional logic, is explosive, then you cannot get rid of explosiveness and at the same time retain all properties of the intial logic. Rather what you do is change your logic. Whether that change is justified of course is determined by the field your logic is to be applied to. If your field of application is classical math, classical logic is fine and explosiveness a price worth paying, since it doesn't interfere with mathematical practice. On the other hand, if your logic is supposed to model data bases, where inconsistencies are likely to occur, explosiveness is no good. There you should choose some fragment of relevant logic like FDE.

That classical logic is explosive crucially depends on the following properties of its consequence relation:

(Here M, N are sets of formulas and commas mean set union.) So, if you want to avoid explosion you must reject one of these properties. Most of the options have been played through in the literature. Parry's logic of analytic implication rejects (2), many relevant logics reject (3), Tennant's intuitionistic relevant logic rejects (4) so that logical implication is no longer transitive. But whatever option you choose, the resulting system is non-classical and that may also be a price to pay for some applications.

If you're interested in these matters of relevance you should read John Burgess's delightful piece 'No Requirement of Relevance', which appeared in the Oxford Handbook of Phil of Math and Logic.

Rather than give you the correct technical answer (edit: okay I ended up going into some technical details, oops), which has been provided, I think I'll try and diagnose where you're intuitions have led you astray.

It seems to me that you think that if a formal system can derive (P & ¬P), then we have to accept it and thus accept the resulting explosion. If I'm right, what you're doing is assuming that whenever we write a logical statement, we're endorsing it. But we're not, we're reasoning meta-logically. That is, to write "S ⊢ Q" is to say " suppose S ⊢ Q is a true statement in the logical system" not asserting it as true, and then trying to make it false later having already said it's true. If we were doing the latter, then yes, we'd have to accept the consequence of every logical statement we write.

Let S be a finite set of statements and Q be what we've derived from S. The question is, is S itself and instance of "⊢ S" or not? Suppose S ⊢ Q. But then suppose Q ⊢ (P & ¬P). You think that now we've got (P & ¬P), and given (P & ¬P) ⊢ A ( where A = any statement and its negation), we've now exploded the logic. But on the contrary, because assuming that "⊢ S" leads to S ⊢ (P & ¬P), we know that the assumption "⊢ S" must have been false. And because it's false, we know that the explosion "⊢ A" is also false. To accept (P & ¬P) as true would lead to explosion. But instead we've reasoned that, axiomatically, ⊢ ¬(P & ¬P), therefore anything deriving (P & ¬P) can't be derivable. Then we've shown that, were S derivable, (P & ¬P) would also be derivable. But this contradicts our axiom that ⊢ ¬(P & ¬P). From this it follows that S was never derivable in the first place. But if S is not derivable, then nor is anything of the form S ⊢ Q (Q standing for anything derived from S). But S ⊢ A is an instance of S ⊢ Q. So A is not derivable from S.

When we write "⊢ S" in this (ludicrously informal) proof, we're not committed to it, nor any of its consequences. We just write it down as if it were the case, and as soon as we derive something impossible within the axiom schema and rules of inference our system is using from pretending its true, then we have a direct way of knowing it's false.

I hope I haven't left you in even more confusion.

How is it that POE [the principle of explosion] does not make mathematical logic inconsistent?

However, having the principle of explosion does not make the axioms inconsistent. That would require a separate step. To show that the axioms are inconsistent one has to derive some proposition P and its negation ~P from those axioms (not from some other assumptions) prior to using that principle to derive all propositions.

Here is how Wikipedia represents that symbolically:

The important thing to note is that we have to first derive both P and ~P. Then we can use explosion to derive Q.

Reductio ad absurdum is a way to derive the negation of an assumption should that assumption lead to a contradiction. Here is Wikipedia's description of it:

In logic, reductio ad absurdum (Latin for "reduction to absurdity"), also known as argumentum ad absurdum (Latin for "argument to absurdity"), apagogical arguments or the appeal to extremes, is a form of argument that attempts either to disprove a statement by showing it inevitably leads to a ridiculous, absurd, or impractical conclusion, or to prove one by showing that if it were not true, the result would be absurd or impossible.

The OP adds this question:

One use of explosion in a natural deduction system is to handle one or both cases of a disjunction to derive a result using disjunction elimination (vE). Here is a proof showing how that works. 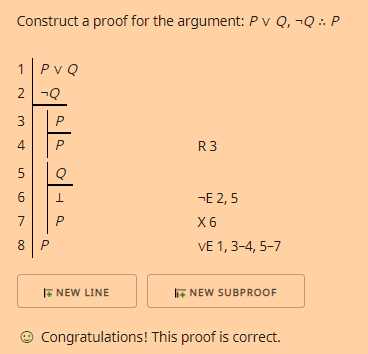 To eliminate the disjunction in line 1 and derive the goal P, I have to consider two cases: P and Q. The first case, P, is easy. It is already the goal I want to derive. The second case, Q, is more difficult. However, I also have an assumption on line 2, ¬Q, that I can use to derive a contradiction, symbolized by ⊥ on line 6. Now I use explosion on line 7 to derive P from that case as well. From explosion I could have derived anything, but what I need is P. So I derive that.

Having derived P in both cases I can use disjunction elimination to eliminate the disjunction on line 1, referencing both cases on lines 3-4 and lines 5-7 and derive P on line 8.

This would be one use of explosion in a natural deduction system.

Since P → P is a tautology there is no problem.

You might be more interested that (A ∧ ¬A) ⊢ P and (A ∧ ¬A) ⊢ ¬P are both valid.

Because it is not common knowledge that inference stops when reaching a contradiction. The very point of PoE is that when a contradiction is derived, anything may be inferred in that context -- including contradictions.

Both these inferences are valid; which means each of the derived statements are considered at least as true as the statement from which they were inferred. Since that statement is a contradiction, P and ¬P are each guaranteed to be at least false.

20
What is the difference between “reductio ad absurdum” and “proof by contradiction”?
5
Suspending some of the usual laws of logic
1
Would the absence of universals not make it impossible to make and/or express judgments?
2
The Principle of Explosion v. Reductio ad Absurdum
2
Regarding Logic and Reductio Ad Absurdum
4
Why do contradictions imply anything?
0
Does rejecting the law of the excluded middle mean rejecting it for all propositions or only for those one cannot derive?
4
Are there “partially explosive” logics?
0
Who first proposed that A → (B ∧ ¬B) ⊢ ¬A was the principle of proof of some theorems?