Philosophers on alternatives to capitalism and communism

Philosopher Karl Marx envisioned an economic system called communism to fight the abuses suffered by working class people during the industrial era. The exploration of man by man and the excessive power given to a few wealthy aristocrats and the commercialization of human ethics and moral values were the reasons to try new socialist formulas. The reason(s) why communism failed or even if real communism has ever been realised in practice is still debatable then again communist regimes are nearly extinct all over the world.

The predicted consequences of capitalism are beginning to be felt today more than ever in the "fake news" era. The business justice, mass-media, politics(lobbying), education, health, prisons, spirituality, war even truth and democracy itself have turn governments into plutocracies and have limited people's equal rights.

Even though technology has been improving since Adam Smith it seems to take away more jobs than it creates; and some companies outsource in third world countries(sweatshops) to reduce production expenses. Governments seem to have problems predicting economic crisis ex. (2007-2008) and some believe that eventually one of catastrophic proportions could happen (a system based on perpetual debt depending on economic growth to counter-effect inflation in a world of limited resources cannot go on forever).

Why don't economists talk about new alternative formulas to communism and capitalism on mainstream media? Governments can nuke the world several times, put a man on the moon, decode the DNA etc but it is not possible to create a better, fairer and more sustainable economic system? What explains this lack of imagination? Is there an interest by a privileged elite to keep these topics mute. It's well known than in some countries such us USA socialist ideas have been demonized ref here and illegally prosecuted for decades but how about the rest of the world? In this very country the social inequity has sky rocketed ref here then again in their Hollywood propaganda not even sci-fi! you can see the possibility of new or better economic formulas being used eg Distributism, Georgism,etc). I'm looking for books and authors who ponder on these topics.

"No society can surely be flourishing and happy, of which the far greater part of the members are poor and miserable" Adam Smith

I pursued the question of alternatives to capitalism and SOCIALISM on a political forum, and the general consensus was those are all we have to work with. In a later, unrelated discussion, someone announced a new thing called "post-capitalism."

There are several books about post capitalism, including Postcapitalism: A Guide to Our Future by Paul Mason. I haven't had a chance to read any of these books yet. But, based on what I've learned about post capitalism, I think it's essentially a con game. It might work great on Mars, but some of the things I've read were so divorced from reality, I've tentatively classified post capitalism as nothing but a propaganda stunt.

Nevertheless, it's worth checking out.

Why don't economists talk about new alternative formulas to communism and capitalism on mainstream media?

The mainstream media are pretty much controlled by people firmly committed to capitalism. Some of the most powerful people in the world are economists - especially Harvard-educated economists. These are the "experts" the media like to quote.

Anyone who embraces socialism will likely be demonized. Look at the way the media treated Fidel Castro, Hugo Chavez and Muammar Gaddafi. Look at what happened to Salvador Allende and Patrice Lumumba. The capitalist gatekeepers don't play games.

Another thing to think about: We're conditioned to thinking of capitalism and socialism (particularly communism) as two distinct entities. I prefer to think of them as end points on a continuum. The goal is to find a happy balance that works for a particular country.

But even a "good economy" doesn't guarantee an ethical society. I would argue that people need to have ethical standards that they inject into government and economic systems.

There are countless books about capitalism, socialism, economic ethics, environmental ethics, etc. However, you have to scrutinize the authors - as in doing some research on them. I would be very skeptical of any book on economics associated with Harvard or reviewed in the New York Times. I'll pass on Paul Mason -- https://en.wikipedia.org/wiki/Paul_Mason_(journalist)

The sheer number of books such as you describe, combined with the difficulty in separating the good ones from the propaganda mill, makes it difficult to compile a list of recommended titles. Any titles I list will be attacked by right-wingers and vice versa.

The Tragedy of the Commons is a classic you're probably already aware of. (It was inspired by an essay, not a book.) -- https://en.wikipedia.org/wiki/Tragedy_of_the_commons

Finally, have you read Muammar Gaddafi's The Green Book?

Gaddafi wasn't really known as a philosopher, but I think he can hold his own with Ayn Rand (author of the capitalist classic Atlas Shrugged). ;)

I recommend Rajani (Kannepalli) Kanth but with some caveats/reservations. But before that...

The Universe is made of stories, not atoms. Throughout history one collective narrative after another has worn thin, then to be replaced by another. We’re humans; that’s what we do
Muriel Rukeyser/George Monbiot

Communism is a story, capitalism another.

And as George Monbiot says if we don't like a story we need a better story not more munged/minced facts and figures.

Rajani Kanth tells his story with passion and conviction... So much passion in fact that it's off-putting to some. See this exchange due to an unwitting oversight on my part.

Hence I thought I'd write this as an answer (rather than just comment) in order to show Kanth in clearer light than he does.

Rajani Kanth can be summarized to 3 themes

Kanth makes a punchy 45 theses whose culmination is

Modernism is the emergent contemporary reality of a Casino Economy, a Video Culture, and a Techno-Fascist Polity.

My main point in writing this post is to adjust Kanth as:

ie discount his anti-Eurocentric diatribes, de-emphasise his pro-feminism and read him as a sharp analyser and trenchant critic of modernity. Personally I think the more accurate word is modernity over modernism but I'll stay with Kanth's terminology.

People today understand that hating a skin colour is wrong. But it's more than wrong; it's illogical. You can hate a murderer you cant hate a tsunami because there's no one there behind it. Likewise you can't hate a skin colour including whiteness/European-ness. And so when kanth says

Thesis 6 Modernism, was first erected in Europe, whence its synonymity with Eurocentrism, on the Metaphysical Triad of:

(a) a near blind “Faith” in Science
(b) a self-serving Triumphalist, Belief in Progress
(c) a Philosophy of rampant Materialism
[a Fourth Adjunct would be the readiness to deploy illimitable Statist Violence to achieve Policy Ends: to cite even the great Libertarian, J. S. Mill, it’s quite right to “ force people to be free”].

we can hear it as a scathing criticism of modernism without fundamentalizing incidentality of history: eg Every sufficiently powerful country, Asian as much as anywhere else, has a history of oppression and abuse. Likewise

Modernist Nation-States [constructed on the notion of bellum omnia contra omnes], much as Civil Society, are imposed, Inauthentic Entities, uniquely European in provenance, and devoid of Anthropic Meaning, that serve only to deceive and/or Alienate the Subject Orders: they neither correspond to, nor serve, our Real Anthropic Needs/Natures.

...remains as forceful and more universally true if the broadside against "European" is broadened to 21st century nation-states generally.

Toning down the feminism

In the western part of India — Bengal, Assam — goddess worship is deeply embedded for generations, centuries. So leaving aside Abrahamic backgrounds, even by oriental, Indian standards people who hail from those backgrounds have an innate profound sense of the feminine. So in

Principle 1. We are, contrary to the ruling precepts of Judeo-Christian Ideology, Self-realized, and Self-realizing, Animals at all times: notions of Progress and Regress, thereby, carry no valency [except as purely arbitrary constructions].

[Among animals we are hominids and among hominids....]

Theorem# A: Men and Women constitute Two Distinct Sub-Species, occupying differing Ontic and Epistemic Spaces.Their respective “Cluster of Traits,” I title the Paradigm of Masculinity and the Paradigm of Feminity:

Now if this seems too hopeless to accept as fact notice that later...

In effect the feminine so-called aspect is what we all seek and is not about sex/gender etc but rather a pan-cultural yearning for androgynous wholeness.

With this much caveat and correction I believe anyone wishing to find a way beyond the left-right divide will find the study Rajani Kanth fruitful. I'd start with the 45 theses but there's always google/youtube.

And hope you do not let go this question 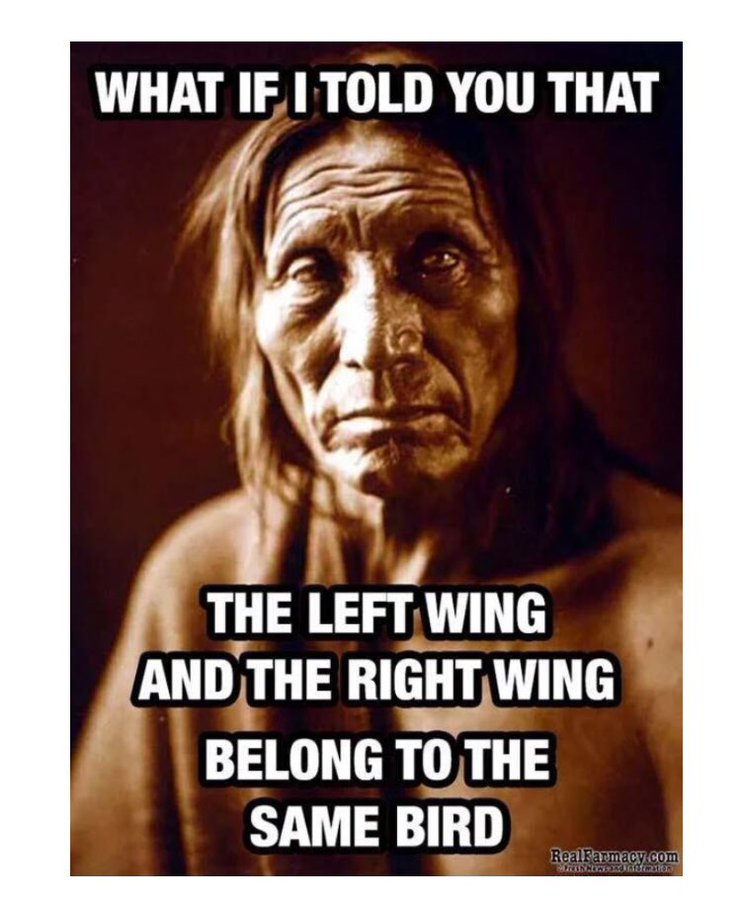 The first obvious alternative to Communism comes from the split in the first international between Marx and Mikhail Bakunin, the latter being so critical of Marx's 'authoritarian socialism' that he got expelled by Marx. Bakunin and Pierre-Joseph Proudhon were the first serious anarchist theorists.

If you want particularly zany options, you may wish to read Gaddafi's 'Third Universal Theory' found in his little 'Green Book'. Another unusual one is Howard Scott, who created the 'Technocracy Movement', which was briefly popular in 1930s America.

And if you want the most extreme example of unusual thinking, perhaps there's no more morbid than Pentti Linkola, who advocates massive human population decline through voluntary or genocidal means under an ecological dictatorship.

As for why there is such a dearth of political imagination, this seems because many events in the last century have caused crisis of faith with so many institutions and ideologies that it has produced an unfortunate nihilistic malaise (I'm citing an answer I did about nihilism here because it's quite a big answer in itself).

Add to this the fact American media dominates the world, and many Americans believe themselves the final state of humanity. At least, if they didn't, there would never have been essays like 'The End of History' after the collapse of the USSR.

Not the answer you're looking for? Browse other questions tagged reference-request political-philosophy economics or ask your own question.

37
How come nihilism is so popular today?
1
What criteria are sufficient for precision in formal semantics?

10
Was the European Left confined in a false dichotomy between capitalism and communism?
4
Fanon's 'Concerning Violence' makes the point that Nazism was the culminating point of the project of European Colonialism, how valid is that?
2
What are the major criticisms of the Labour Theory of Value?
4
Does capitalism have an end goal?
0
Authors on leaders, leadership, and the crave for power
0
Authors who think war and violence are part of the American culture and economy
4
Authors on the Credibility and Corruption of Modern Science