Simulation argument: is “leaf reality” is most probable? [closed] 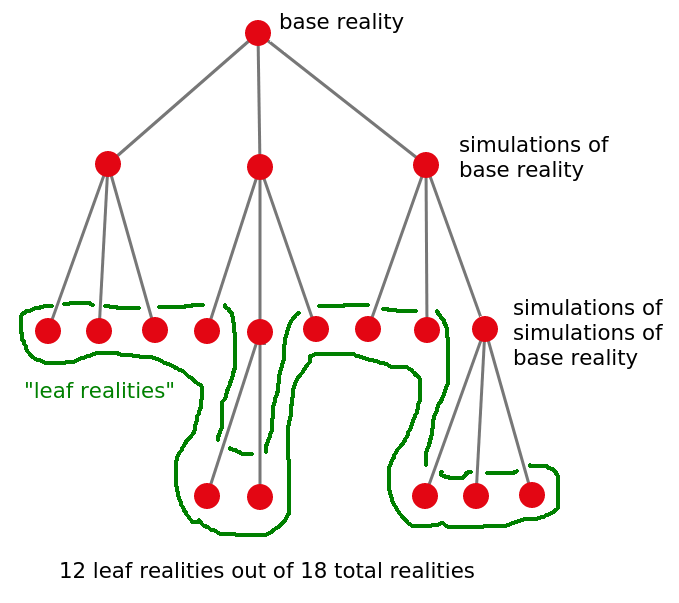 So, can we strengthen the anthropic reasoning used in the simulation argument, to say that if we live in a simulated reality, we probably live in a leaf reality beyond which no further simulations will occur?

In my opinion it's a bad argument for the following reason.

The argument always starts along the lines of, "In 1980 we had Pong and today we have massive multiplayer games and therefore in the future our simulations will be indistinguishable from reality."

But that argument misses the fact that the players in Pong are not self-aware. Ms. PacMan does not have an inner life in which she experiences pleasure at eating white dots and terror at being gobbled up by monsters.

It's certainly likely that in the future we'll have virtual reality headsets or direct neural jacks in the base of our spines that allow us to experience and participate in an illusion indistinguishable from reality. Just as our nightly dreams seem real at the moment we're dreaming them. It's the question of whether I'm a man dreaming I'm a butterfly or vice versa. Simulation theory's a trendy new version of a very old doubt.

To make the anthropic argument work, we'd have to assume that not only the experience but also the experiencer are created by the computer. But we have no idea how to do that or if it's even possible. We don't know what consciousness is, let alone how to implement it; or for that matter, how we could even know that we have implemented it. I can't test to see whether my next door neighbor is self-aware. "Hi Fred." "Hi user4894. Looks like a nice day." "Yeah. See you later." "You too." I drive away thinking to myself, "What a sentient fellow. He must surely possess what Searle calls intentionality."

But implementing self awareness? Tell me how to do it once, and maybe I'll consider the hypothesis that it can be done recursively.

can we strengthen the anthropic reasoning used in the simulation argument, ...

The idea that we are simulated is a contradiction to the anthropic principle...

The anthropic principle is a philosophical consideration that observations of the universe must be compatible with the conscious and sapient life that observes it. https://en.wikipedia.org/wiki/Anthropic_principle

The idea that we are simulated is a contradiction to the anthropic principle because the most salient and incontrovertible fact about our own "conscious and sapient" life is that it is indeed conscious. Consciousness suffers no simulation, at least not in any sense of simulation I know of, and not for the kind of consciousness I am now subjectively experiencing.

Of course, this leaves open the suggestion that at least the physical world might be a simulation, and why not, but I don't see why my consciousness would be experiencing this simulation from the inside.

The simulation thesis is even less plausible than God. The infinite powers of an almighty God would at least have enough credibility as the cause to our consciousness as we subjectively experience it.

... to say that if we live in a simulated reality, we probably live in a leaf reality beyond which no further simulations will occur?

The more plausible place for our world is at the root.

The limits to how many nodes can exist is Zeno's dichotomy paradox however you already granted that with your assumption: "This tree must end." However your ultimate question is concerning our specific reality. Argument granting that "Simulation theory is correct:"

First, the caveat here is that simulation theory is only useful in science fiction and has never itself been considered in actual philosophical discourse; because actual discourse must respect the current state of knowledge. In considering universes, much of that knowledge comes from cosmology and physics.

The question specifically asks if no simulations can be derived from the one we allegedly exist in. If we are, as the theory argues, a leaf reality.

Answering this requires some more rigid definitions or ambiguity will derail the process.

Let's start with what we know today: Time is not as important as we once thought. All science today using both General Relativity and quantum mechanics leads us to the conclusion that space and time are fundamentally one thing, they are inseparable, where warping space necessarily warps time and vice-versa. Einstein's field equations clearly show that time was created with the universe. Saying "what happened before the Big Bang" is like asking what you were doing during the Holy Crusades. For some people that's hard to get around, but the math works that way so I accept it, and it really isn't so hard to understand for anyone who plays F.E.A.R. and battles the Replicas. While you may wonder why your opponents are so smart, the real question is, "How can I be faster than them?" The answer is called "reflex time" by the game designers. Even though Replicas are very smart and powerful, time itself is controlled at the whim of the programmer, who exists outside that simulated universe. At some point, the world F.E.A.R. takes place in was created. But no matter how smart a Replica becomes inside that world, even looking at trees that seem to be decades old, they will never understand that their universe was created in 2007 in a timeline above their own. Here is an illustration of the problem of time: 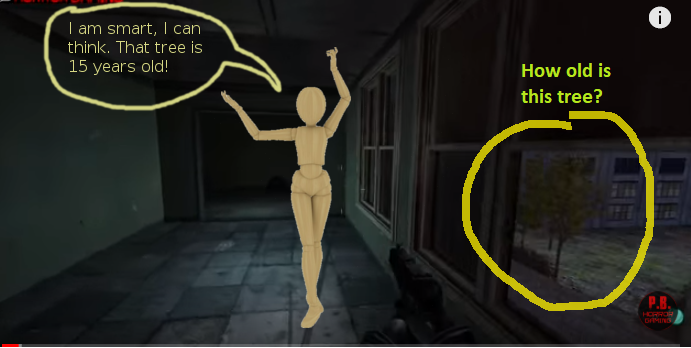 To the simulated person the tree is 15 years old. But that tree didn't exist 15 years ago - in our time. The simulation has no way of calculating our time, and we can pause the game, go get lunch, and start it up again without them ever knowing time was stopped in their world.

Nick Bostrom's problem with causality: Bostrom argues that computer power may advance to a point where the simulated world equals or exceeds the "real" world (or the simulation above it). This cannot happen in any causality, at any node of the alleged simulation. In all cases, a cause must be BEFORE any effect it causes. This means the delay between a cause and an effect can never reach zero. No matter how sophisticated a computer becomes, it will never make an eye blink, for example, with zero delay between the time the program decids to blink, and the time the eye actually blinks. Some delay will always exist.

This means we can never be replaced by our creation inside some simulation, because the cause of every action within the simulated time (which we created), will always happen in OUR time (real time), and will always be before the action we cause.

Is it impossble to create another simulation after a leaf reality?

Absolutely. What the programmers of F.E.A.R. call reflex time proves that any simulation can be as fast or as slow as the parent reality decides it to be, so long as it obeys causality and has SOME positive value of time. In other words, we could theoretically play F.E.A.R. on an ancient 1mHz computer and the simulation would work exactly the same. It would be extremely slow and boring for us, but within the simulated world everything would move "normally" as they expect it to. A bullet might take 2 weeks to reach the wall in our time, but it is still too fast to dodge in their reality. Because they are all thinking at 1mHz!

We can extrapolate this further and allow the simulated persons inside F.E.A.R. to develop their own computer and create a reality. They will use what they think is a "obscenely fast" processor - 3 Hz - and create their own simulated people. In OUR time (2 nodes above them), an eye blink may take 10 years to us, but that doesn't matter.

This can go on indefinitely. There is no reason that computers need to advance or reach "hi fidelity" before simulation begins. The processes which govern causal actions are time-independent - meaning that they only need to have a cause before an effect, but the amount of time between cause and effect is not governed in any way, it simply cannot be zero or outside the causal light cone.

In summary, given the definitions provided for the simulation hypothesis and our current state of knowledge of reality, there can be any arbitrarily large number of layers of realities created by any simulated reality; and each layer of reality is created with its own space-time dimensions that do not need to be "fast" by any measure in relation to the parent reality. General relativity prohibits the existence of "leaf realities" and refutes that reality spawning can have any dimensional limits at all. The anthropic principle does not refute that child realities may be created; it states that consciences outside that reality (us) cannot be supported inside that created reality - only created consiences inside are compatible (I.e., TRON demonstrates a violation of the Anthropic principle).

Not the answer you're looking for? Browse other questions tagged simulated-universe or ask your own question.

2
What does it mean for the universe to be a simulation?