How much math must tenured full philosophy professors know?

My son was reading Philosophy of Religion: A Very Short Introduction by Tim Bayne, 2018, 1st edition. He saw a second year undergrad subject, Cardinality, on p. 29. The philosopher who created this counter argument must know Cardinality! 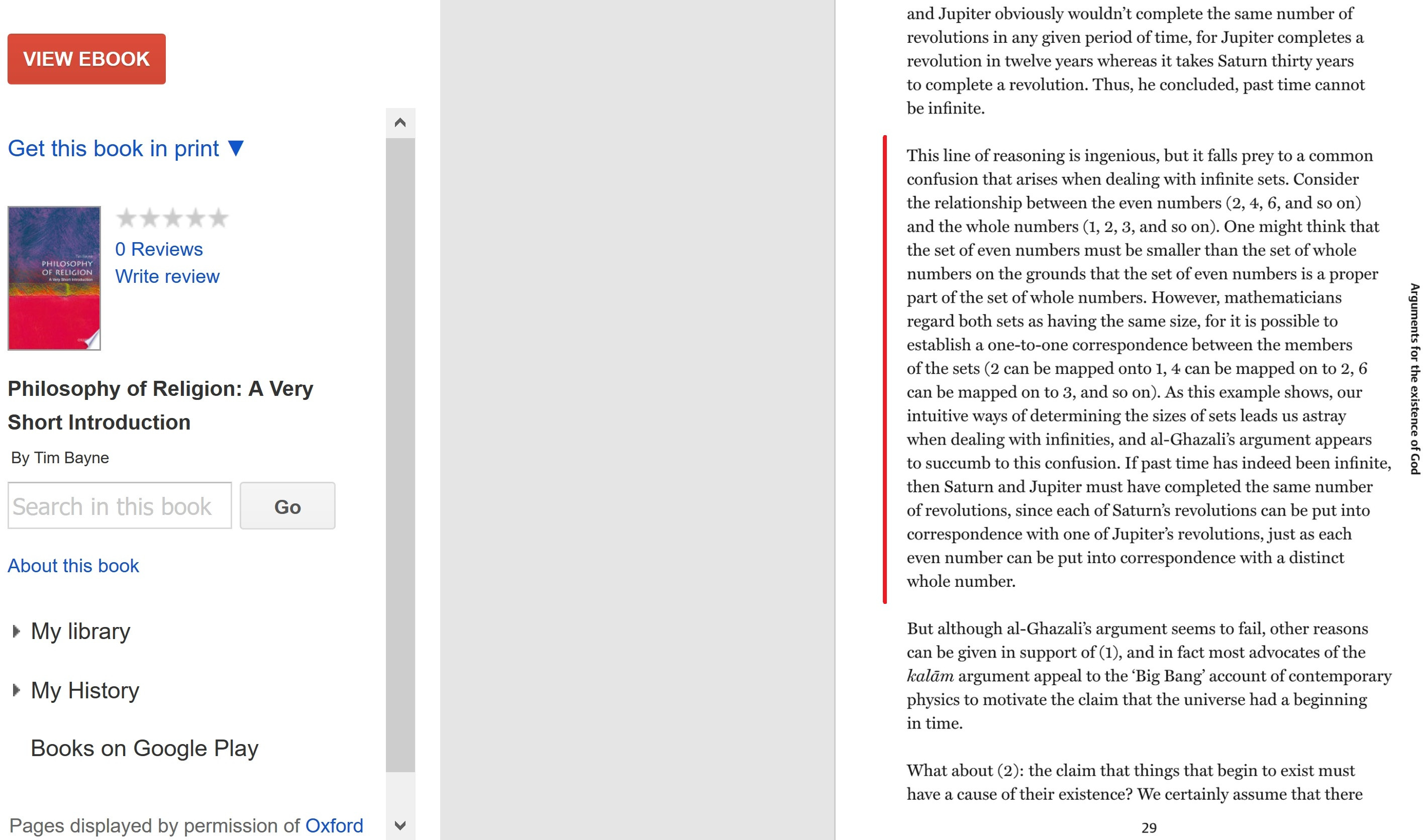 On the referenced page 29, Tim Bayne is making an argument by analogy both for and against al-Ghazali's view that the universe is not eternal. He claims that just as people become confused about the cardinality of infinite sets so "al-Ghazali's argument appears to succumb to this confusion".

Bayne's analogical argument may be weak, but making it does not require him to take a course on set theory to know about the non-intuitive nature of the cardinality of infinite sets. A reading of Wikipedia's "Countable set" article might be enough. He also assumes much of this is common knowledge. However, he would be expected to be knowledgeable on al-Ghazali or at least on the philosophy of religion, perhaps even having taught courses on the topic.

Similarly his reference to "the 'Big Bang' account of contemporary physics" as support for the finiteness of the universe does not imply he ever took a physics class. Much of his use of the big bang could be viewed as common knowledge. The reader, given that common knowledge, is left to judge if his argument about al-Ghazali's position is plausible or not.

The question presupposes that there is anything approaching any kind of universally standardized criterion for being a tenured professor. De facto, the main criteria are how many articles you published and (at top schools like the one you mentioned) how many potential top graduate students you will attract as an adviser. At smaller universities they will take undergraduate student ratings of your teaching into account. Even then, that's not a decisive determination. All else being equal, a lot of times it comes down to what a bunch of tired, disagreeable people on a hiring/promotions committee can agree to so they can all get home to dinner and have the tenure meeting over with.

Getting a PhD and tenured position in philosophy is not a standardized endeavor. Different countries, types of university, departments, and furthermore the temperaments of people making decisions within departments will vary. What you get trained in as a graduate student depends on the needs of the PhD Dissertation that you propose. This could necessitate a lot of set theory or none, and anything in between. On average most philosophy professors tend to know something about set theory, but many of them not much more than you might read on wikipedia. If the average of the bell curve is going to be knowing something about set theory, then you have to know that there will be a significant number of people on the side of knowing (almost) nothing about set theory to those who moonlight as mathematicians. Moreover, set theory is old hat these days among tech-savvy philosophers, who gravitate much more toward game theory, probability theory, and increasingly toward computation and complexity theory. In 50 years, it's possible very few philosophers will know formal definitions of cardinality, though that's somewhat unlikely.

There is absolutely no particular thing that any tenured professor of philosophy "must know". Theoretically, they could know absolutely no math and still become a tenured professor, though that's unlikely. It's not like there is some bearded man waiting at the gates of the Tenured Philosophy Professor's Utopia who refuses to open the gate until you demonstrate knowledge of set theory, or of anything else for that matter. Who could even make that determination? The full tenured professors are the experts--there is no board or group above them who can determine what they need to know and not know. Charisma, social networks, good writing ability, being a good person to work with and have around a department, even having tenured spouses---all of these things and more can and often do contribute to tenureship.

Not the answer you're looking for? Browse other questions tagged philosophy-of-mathematics philosophy-of-religion or ask your own question.

39
What should philosophers know about math and natural sciences?
5
Should a mathematician/physicist know any philosophy?
3
How do we know we believe things?
3
How do we learn math and science?
3
How ancient is 'Philosophy'?
0
How much platonism do I need to handle the halting property?
4
Philosophy of Math that talks about group theory, (or other stuff that's math but not numbers or geometry)?