I decided to read the provided textbook to understand better (Salmon Merrillee - Introduction to logic and critical thinking) but still have some questions.

I am a little confused with the part where it says that the conclusion cannot be false if the premises are true. Consider a deductive argument with a true premise, then what they are saying is that whatever the conclusion is, it will be true (?) then wouldn't any conclusion be true - even one that is obviously false? I'm sure they do not mean it this way, but can someone define it in simpler terms?

How exactly do we check if a premise guarantees the truth? E.g.

Is this how I should approach the argument?: Look at the premise "Jack is a bachelor" and derive the meaning: bachelor means "a man who is not and has never been married." (from dictionary)

And then I look at the conclusion "Jack has no wife". This matches the premise, hence it is a deductive argument?

And what about this example?

According to the original definition of a deductive argument, I would think that the above is a sound argument.

Why is the sentence false? Considering the first premise says that:

1)Whatever is done as an expression of love is morally acceptable.

and the second premise says that Mrs X. beat her child .... because she loved him.

However, the textbook shows this, which I do not quite understand. 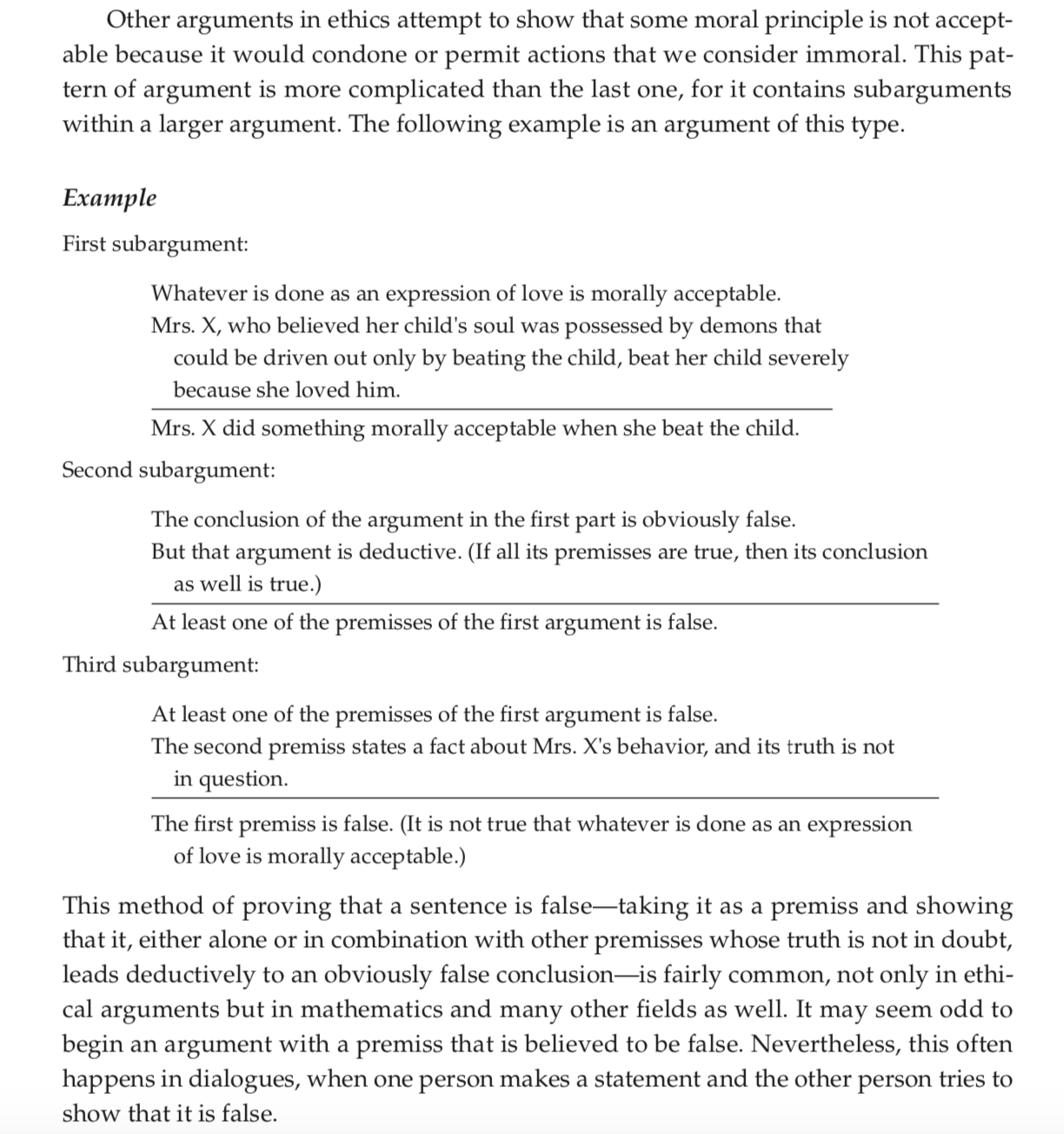 I think what's confusing you is the distinction between syntax and semantics. Logic is entirely concerned with syntax: with the rules governing the structure and transformation of symbols. Semantics - the meaning of symbols, and the relationship of symbols to the external world — is a separate matter, one that lies outside of logic properly put. 'Truth' is a semantic property, not a logical one; we can assert that a premise is true or false, but we can't prove it. Logic allows us to transform the truth value of our premises in order to demonstrate that other statements must be true if the premises are true.

A deductive argument — a chain of connected propositions — that follows all of the syntactic rules of logic is called valid, meaning that we can properly demonstrate that conclusions are true or false with respect to the truth or falsehood of the premises. So when your textbook says:

In a deductive argument if the premisses are true the conclusion cannot be false.

To use your example:

Because each step in the process is syntactically valid, then the conclusion must be true if the premise is true: e.g., if Jack is a bachelor, then Jack is unmarried.

I take it your "not quite understand" refers to the method of proving something false by starting with a statement of that something along with some known truths and deducing a false conclusion.

A classic example of this method is the mathematical proof that the square root of two is an irrational number:

What you seem not to understand is the use one can make of the concept of deductively valid argument.

(1) First case. You have premises and do not really care whether they are true or not. What you want to know is which conclusion can be derived from these premises, using logic ( that is, which conclusion would follow in case the premises were true). The goal here is simply to learn logic.

(2) You have premises and believe ( or even know) that they are true; you use logic to find which conclusion ( which " new truth") can be derived using logic . The goal here is to discover " new truth", to extend our knowledge ( using logic).

(3) You are presented with an argument the conclusion of which you know is false, or cannot believe is true. Here , you can use logic

Not the answer you're looking for? Browse other questions tagged logic argumentation knowledge critical-thinking or ask your own question.

2
Trick of just adding: if the premises are true then the conclusion is true
7
Why is Tarski's notion of logical validity preferred to deductive one?
5
How can a false premise still produce a Strong Inductive Argument?
1
Exercise problem involving validity of arguments
1
Why is Jackson’s Knowledge Argument (“Mary’s room”) widely accepted as being self-consistent in its premises?
22
How is the argument "I love all logic, but I don’t love deductive reasoning. Therefore, the moon is made of green cheese." valid?
5
Is it scientific or a logical error to claim something is true because I can't think of another explanation
2
Is this argument about abortion being both right and wrong valid or invalid?
1
Determining the validity of the arguments in the exercises of The Norton Introduction to Philosophy