How can I “fail to attend to reasons that are yours to conform to, even though I cannot be accused of failing to conform to them myself”?

The distinction between principals and accomplices, as we discovered, is embedded in the structure of rational agency. As rational beings we cannot live without it. It enters our thought as soon as we begin to think about responsibility. I am responsible for my actions, and you are responsible for yours. My actions are mine to justify or excuse, and your actions are yours to justify or excuse. And yet my actions include my actions of contributing to your actions. So there is a sense in which my responsibility for my actions can extend out to your actions. I can be accused of failing to attend to reasons that are yours to conform to[,] even though I cannot be accused of failing to conform to them myself. I fail to attend to them, in the relevant sense, by contributing to your non-conformity with them.

I don't ken the emboldened quote. Please ELI5? Can someone apply it to a simple example to assist my kenning?

I added a comma to make that long sentence more readable, to split the concessive clause. 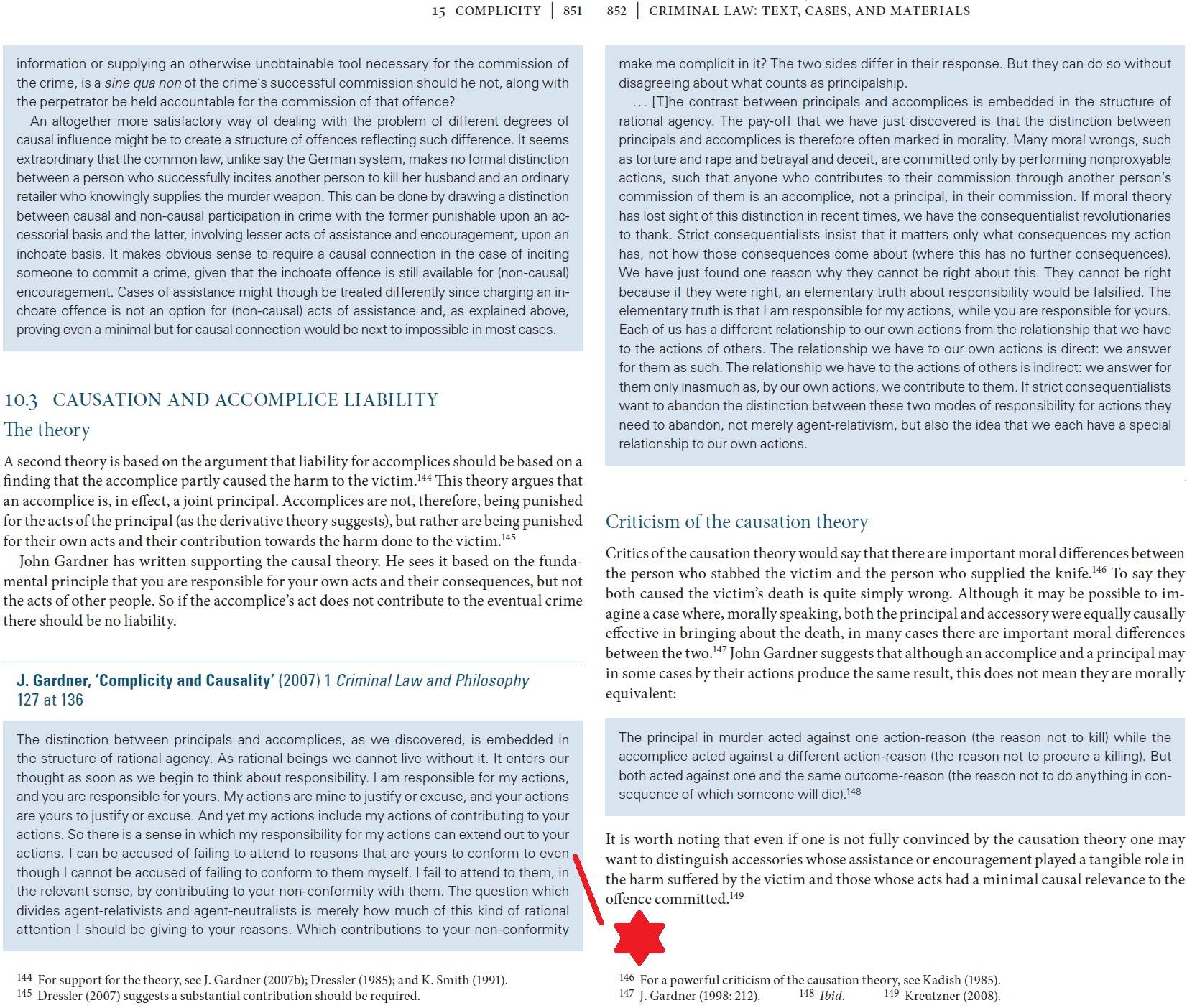 All this means, really, is that people are not independent islands. Our actions connect with the actions of others such that even if we are not doing anything objectionable in our own right, we are supporting the objectionable actions of another.

So for instance, say you are sitting at home watching television, and your best friend knocks on the door and asks if he can crash at your place for a couple of days. There's noting objectionable in allowing a friend to stay over, obviously, but then you discover that the reason he wants to stay over is that he just robbed a bank, and he's hiding from the police. You are not responsible for his act of robbing a bank; you didn't rob a bank, so you didn't 'fail to conform' to the idea that one shouldn't rob banks. However, by allowing him to hide at your place — by 'failing to attend to his reasons' for wanting to stay at your place — you become complicit in the act of robbing the bank. He failed to conform to the principle, and you are protecting his failure to conform. Because of that you share responsibility for his bad act.

In other words, you cannot say: "Hey, I just let a friend stay over; I knew he robbed a bank, but my decision had nothing to do with that." Knowing that he robbed a bank automatically becomes part of your decision process in allowing him to stay at your place, and you cannot shrug off your responsibility for him being able to hide from the police.

I think the problem can be solved by, first of all, drawing a distinction between conform to reasons and attend to reasons. Let us, then, put an example to clarify the distinction. Let us say I am in a hospital waiting in a room for the doctor says it is my turn. In the waiting room, there is another man. While we are both waiting, we start talking about superficial stuff, and then eventually he starts telling me about his family situation. He has a son, but he does not live with him. The child lives with the mom. While the man is explaining to me this situation, he says that he thinks he does not need to take care of the child at all, since he does not live with him. At this point, I recognize the deficiencis of his reasoning, so I have essentially two options. Either I attend to the reasons,and explain to him, why it would be morally correct to take care of his son, and, therefore, conform to these reasons, or I just avoid trying to show him why his actions are being morally quite questionable, and, in that regard, I just fail to attend the reasons to which he should conform.In either case, I cannot be said to conform to the reasons this man should conform to in respect to his son, since he is the one who is morally expected to act according to these reasons and not me. Certainly, I could still decide to help this child, but the reasons to which I would conform to do so would be different than the ones to which the father of the kid should conform in order to act morally correct.

Not the answer you're looking for? Browse other questions tagged philosophy-of-law or ask your own question.