Been working on this one question for the past hours and I can't ever seem to get the last step working. Any help would be appreciated!

This is as close as I got: 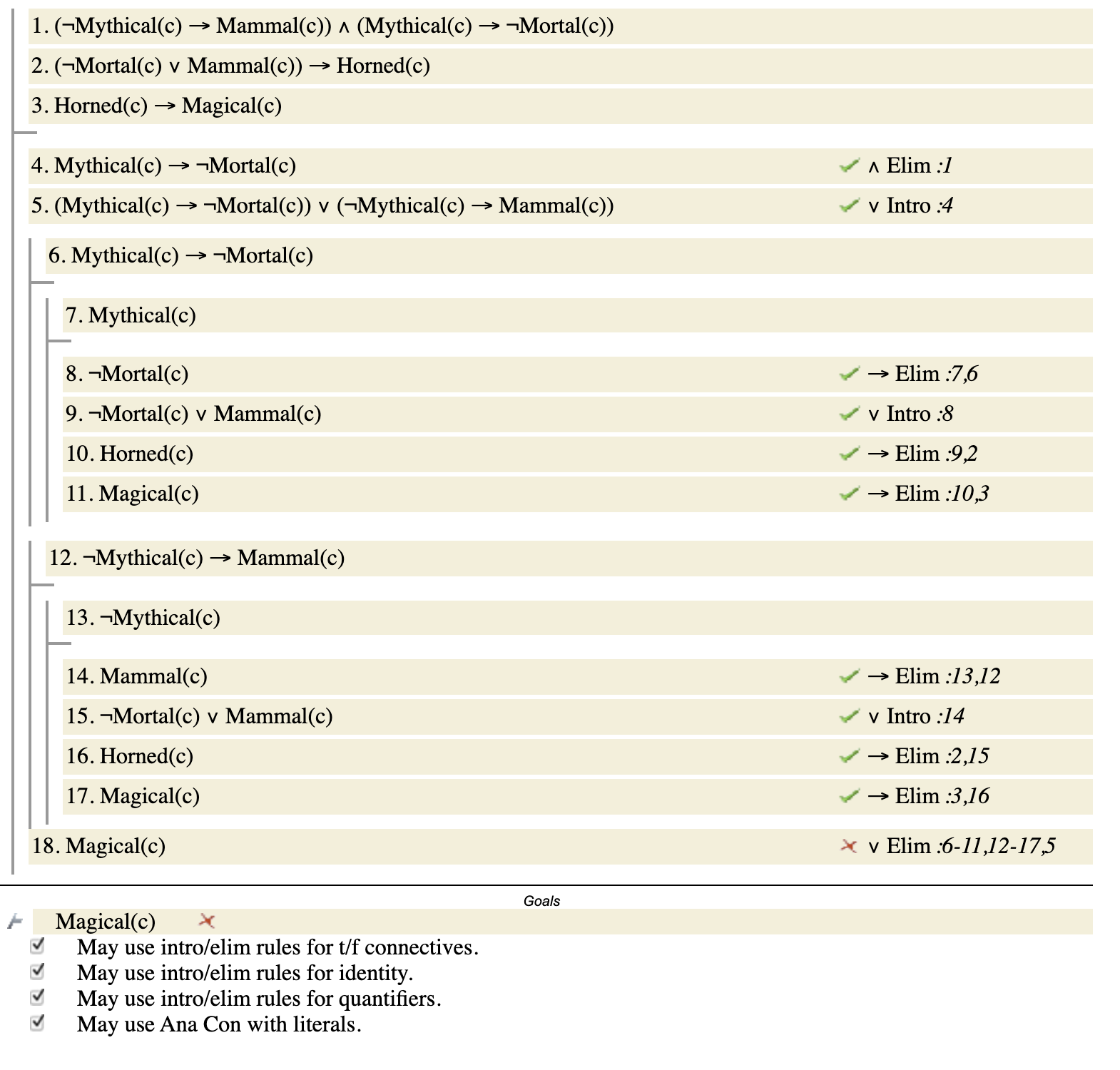 I think I'm stuck on the last step. Please update if you end up finding out how to do it.

Lines 6 and 7 should not be assumptions. They should be derived from Premise 1 by conjunction elimination; and thus do not raise contexts. The disjunction you should be eliminating is ~Mythical(c) v Mythical(c), derived by LEM.

If you cannot use a TautCon to derive ~Mythical(c) v Mythical(c) you can use nested proof by contradiction.

I know it’s a formal logic question with a mechanical proof, but maybe taking a semantic approach might help you see what’s going on.

Firstly, we’re talking about a constant object C. (In practice C might be a parameter for any object, but let’s think of it in specific terms first)

We have three premises about C to start with.

Firstly, the last one is the simplest; if C (specifically) has horns then it is Magical. One example of this might be if we were assessing C as a horse - if it had horns then magic would be at work!

Next, if either C is not mortal or it is a mammal, then it has horns. Perhaps given what we know about C, by way of evidence of some action C has taken, we have narrowed it down to the possibility that the only way C could possibly not have horns is if it were some mortal non-mammal animal.

Last, some principles of Cs; if C is mythical then it is not mortal, and if C is not mythical then it is a mammal. I don’t know for sure if for real, non-mythical Centaurs existed, but I can tell you one thing about them for sure; they’d be mammals, rather than reptiles or plants.

Detective groundwork laid out about what we know about C - so, what conclusions can we draw? (I leave that to you and others)

This shift to semantics, over syntax, helps us watch out for situations where our intuitions struggle with general principles, and identifies possible remedies; often, it’s that we’re not being specific enough with our symbols, or hiding their specificity through the form our reasoning takes. Obviously this example is a bit silly but it should teach you something important about Logic as a nuanced formal tool.

Not the answer you're looking for? Browse other questions tagged logic proof fitch or ask your own question.

1
Fitch Proof - Logic LPL 13.11
6
In Fitch, how does one prove “(P → Q)” from the premise “(¬P ∨ Q)”?
0
language logic and proof chapter 12 question 49 and question 50
2
Solving a proof in which the goal is the negation of a variable in Fitch
1
Fitch Proof - Arrow's logic of preferences
2
Contrapositive Fitch Proof