Is there any theory of consciousness that extends conscious existence into the future?

However, one possibility that occurred to me is that consciousness is actually a process that exists very marginally in the future, in some sort of haze of physical (im)probabilities. This would give the opportunity for consciousness to be non-deterministic and to affect the outcome of probabilistic events before they actually occur, without leaving any physical record of itself except that an apparently insignificant, improbable event had occurred. 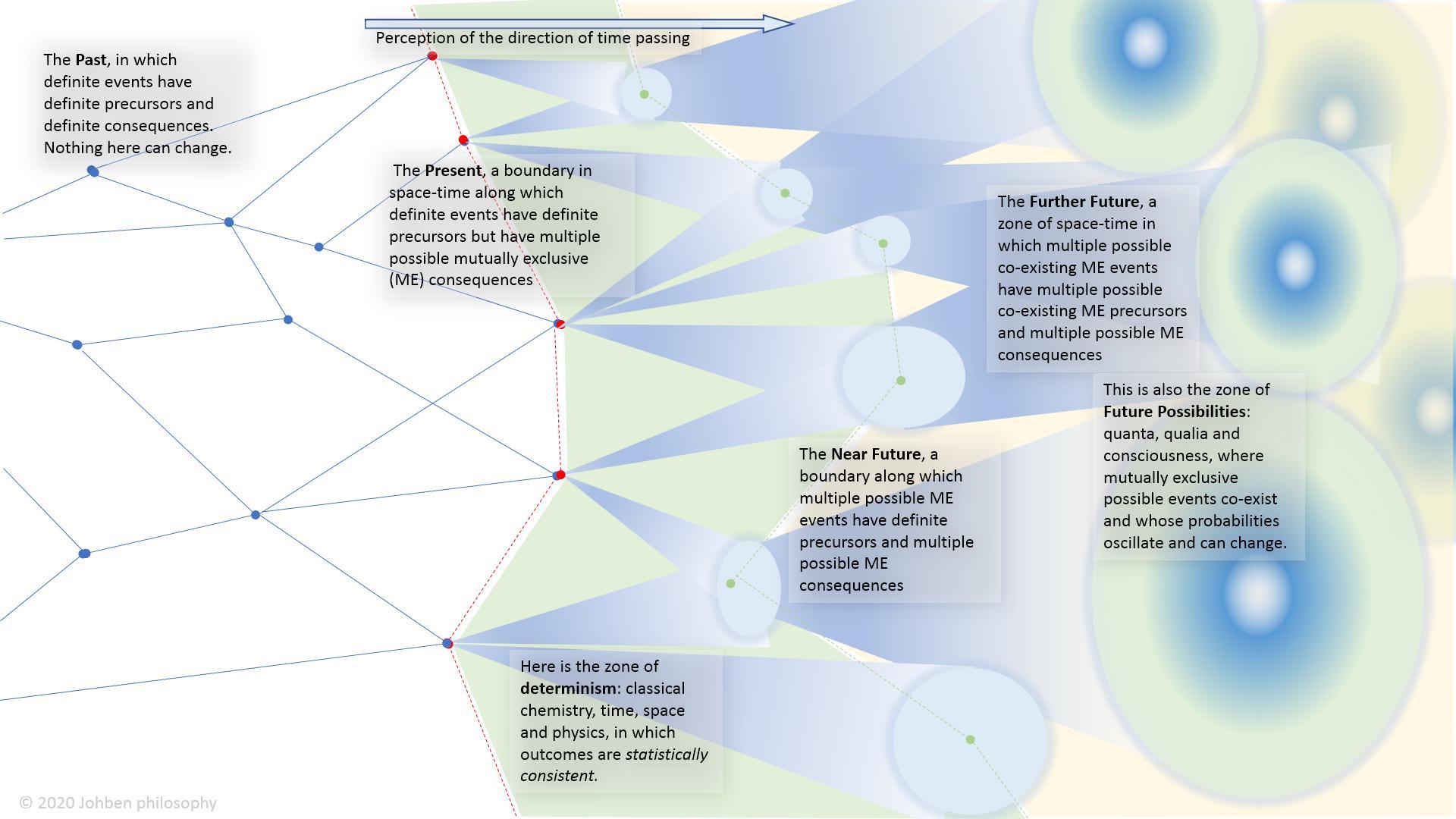 The first thing to say is that all such precognitive theories are, with at least some justification, regarded by the mainstream as pseudoscience. While we have learned that the trio of temporal causality, locality and realism cannot all be aspects of the underlying reality and we have no idea which is or are not, there are a good many theorems in quantum theory as to why the known forms of "quantum weirdness" cannot transport information backwards in time.

Having said that, several theories along the lines you propose have been put forward. First off the block, in 1927, was JW Dunne in An Experiment with Time (many subsequent editions). He proposed that our consciousness extends forward only along its own timeline, i.e. we can foresee or, in his case, dream of, only our own experiences in the future. We mostly don't see it because the brain is so busy paying attention to the present moment. He decided that precognition of near-future events was far more common and that quantum uncertainties provided the clue as to how it all faded off in the far future, but QM was not yet developed enough to say anything sensible. He also proposed infinite regresses in levels of time and consciousness. Dunne's theory was discussed at the time by philosophers of Time such as JA Gunn, MF Cleugh and CD Broad, but was not widely taken up and his infinite regresses were universally condemned.

A more recent proponent, describing almost exactly your model, is psychologist Fernando de Pablos. See for example his Brain at Night: Scientific Foundations of Precognitive Dreams, Diego Marin, 2011, pages 236-7 (If you can get hold of a copy). However I find his arguments to be disorganized and unscientific. He also appears to have little expertise in QM. He cites several earlier books and papers of his (which I have not seen). Two which look like they might be relevant here are:

Having said all that, quantum theory remains incomplete and continues to get ever weirder, while information theory is transcending its roots in telecommunications theory and beginning to influence the philosophy of artificial and even human intelligence. It is conceivable that the likes of Penrose may be on to something (though I regard his microtubule theories as lacking in a coherent philosophy of mind), and that some as-yet undiscovered quantum weirdness might allow conscious information to leak back in time.

But none of the theorists mentioned is or was a philosopher of any standing. I know of none such who have run with this kind of model.

I am not sure what "a continuous process existing in the future" means.

Counterfactuals, use real events in the past, to build models now, which can have real consequences on the future. The ability of consciousness to do that, and select or sift for unlikely events is a defining feature of minds, and from a physics perspective the defining symptom of their presence.

This just sounds like phenomenology to me — Husserl might be a good place to start. I’m not going to try to present it from scratch but suffice to say phenomenology creates concepts like “retention” and “protention” — roughly memory and anticipation — to help us understand how to ground intentional states in the world, that is in sensorimotor coordination and prehension of sense-data (apperception of objects and environments). Events are fundamentally cuts or discontinuities that stand out and are perceivable against a background or baseline sensation — particulars are interruptions of more fundamental processes constituted by the continuous synthesis of perception on the part of engaged agents in the world (living forms and knowing subjects).

Even consciousness or free-will existing at the quantum level or some other probabilistic physicalism theory in the realm of math/information/physics as you try to sought after, this is still determinism as a probabilistic law is still a deterministic "physical truth" although its outcome may be uncertain. A latest phenomenology framework is called Integrated Information Theory proposed by Tononi et al, and further applied by physicists such as Tegmark. All kinds of such physicalism ambitious theories including predicting free-will are deterministic and seems to me in conflict of the very nature and existence of free-will, unless they reject the existence of free-will.

Another argument against such reductive physical deterministic mind theories is the ancient debate about "Sloth Syllogism". If everything is fated, the argument goes, then whatever action one “does” will or will not happen whether or not one wills it, therefore one need not will anything at all. One can just be a sloth, and let the universe continue. Leibniz thinks this is absurd–indeed, immoral. The will of an individual matters. If John Doe is the kind of person who is a sloth, then (everything else being the same) the course of his life will indeed be quite different than if he is the kind of person (like Caesar) who takes events by the scruff of the neck.

Similar to Leibniz's monadic view, I hold that some consciousness aspects (free-will, self-awareness, ego, soul, valuation, judgement, life meaning, potential instead of the actual, etc) are contained in another level of true ontological simple substance which cannot be predicted by any of its perceived physical phenomena (shadow). In this ontological world there's true final cause applicable in these specific aspects, thus still consistent with pre-established determinism at this level, but is not determined largely by efficient physical laws in our perceived world. So in summary, I believe not all consciousness or mind aspects can be extended into future by any ambitious physical or informational or chemical or biological theories...

19
Is free will reconcilable with a purely physical world?