Why does Wittgenstein have a problem with writing “f(a, b). a = b"? 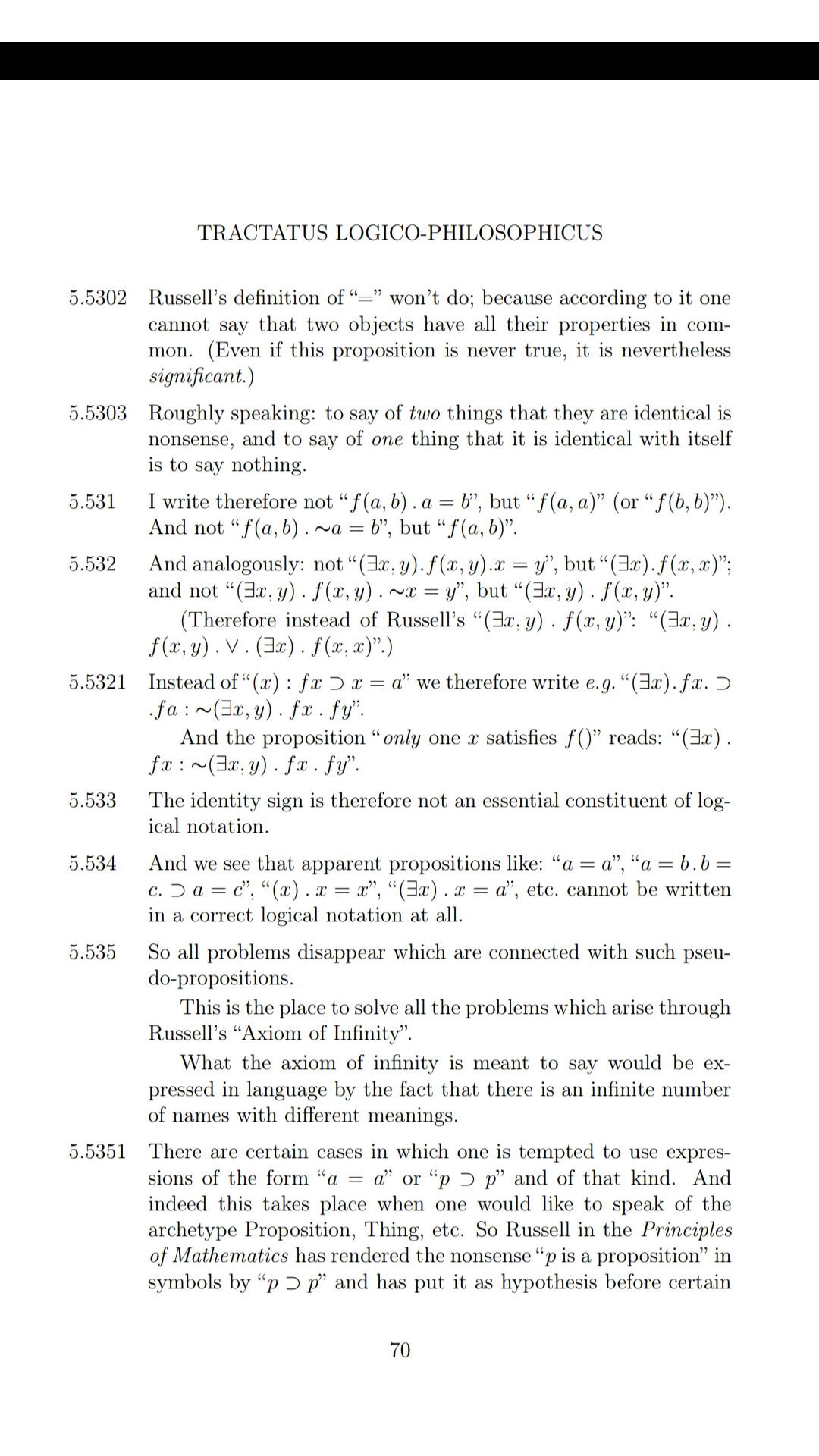 Why does Wittgenstein have a problem with logical statements saying nothing ? (5.5303) . How would Wittgenstein want us to interpret f(a,a) ?

He also mentions axiom of infinity from which Russell argued for the existence of an infinite number from the definition of cardinal number. He defined 0 as number of propositions that are true and false or the number of elements in an empty set. Then the set containing only 0 has 1 element. Hence the number 1 exists and other natural numbers can be easily proven to exist. Does avoiding the use of equality symbol prevent us from equating objects that are not identical or especially in case of Aleph numbers, say equating the set of odd numbers with the set of even numbers since they have the same cardinality. For example in case of 1=p and 1=q , we conclude p=q but p and q are not identical. Which may cause problems according to wittgenstein as he writes

" Roughly speaking: to say of two things that they are identical is nonsense… "

I am really confused here and l am quite sure that l am getting this wrong completely or missing the key issue beforehand. It would be great to see some clarification regarding the points shown in the picture. I am quite happy to change my mind if l see some interpretations that are polar opposite of what l have understood.

Because he reads a and b occurring in the atomic proposition f(a,b) (e.g. "a is to the left of b") as referring to two different objects.

According to Wittgenstein, the only legitimate use of the sign of identity is at a meta-level, in order to talk about the use of signs, and not to assert anything substantive about the world. Thus he says:

4.242 Expressions of the form ‘a = b’ are, therefore, mere representational devices. They state nothing about the meaning of the signs ‘a’ and ‘b’.

If so, at the "object language" level, statements with identity are non-sense: a=a is uninformative (it is trivially true... but it is not a tautology, and this is a problem for Wittgenstein view!) and a=b is simply false: different names must mean different objects.

The "problem" with the axiom of Infinity regards W&R's project, developed into the Principia, to ground mathematics on "pure" logic. But the assumptions that there are an infinity of objects in the universe is not something "purely" logical.

The "solution" Wittgenstein hints to amounts to saying: we have a language with an infinity of individual constants that refer to different objects...

But in this way we assume again something about the world that can be true or not, but surely that cannot be asserted on the basis of logic alone.

It helps to put this in a concrete example. If we have two apples sitting on the table before us, it is self-evidently true that they are not the same apple, so saying apple A equals apple B (a=b) is nonsense. If we have one apple sitting on the table before us, then it would be pointless to say that apple A equals apple A (a=a); that is a best a trivial tautology and at worst a circular definition.

I think Wittgenstein is referencing Frege's morning-star/evening-star paradox (See Russell's On Denoting). The problem is that we have two terms that supposedly denote two different objects — the morning star and the evening star — then we discover that (in fact) they both point to the planet Venus. That posed a problem for analytical philosophy, which depended heavily on strict denotation (a strong connection between propositional terms and real-world referents). Saying A=A or B=B is qualitatively different than saying A=B, because the first is tautologically true while the last requires a detour though extended logic, observation, or etc. Frege wanted to say that concepts had both denotation and sense: denotation being the unique thing itself; sense being the multiple ways it can present itself to the subjective mind. Russell objected to the idea of introducing a subjective construct, and tried to argue for A=B on the grounds of indirect denotation, which was not particularly convincing. Wittgenstein is saying that the paradox arises in the first place because we've imposed this weirdly abstract concept of 'equals' where it doesn't belong.

It is proper to say that a and b satisfy a the equivalence relation that defines a field of inquiry, but equivalence is all there is, not equality.

Two infinite sets are not equal on account of having a bjiection, instead, they satisfy the equivalence relation of cardinal counting. The odd integers simply are not the even integers. 1 + 1 does not equal 2, the cardinalities combine in the expected way. But cardinality is not a property, or a function, it is an equivalence relation. (Properties have domains, functions have images, cardinality has neither.)

Clearly setting the collection of groups and the collection of ordinal numbers side-by-side gives you two things. But you cannot put those things into an object that represents the pair and compare it to the set {0, 1}. The objects involved are too slippery. If you let them be contained, then you can pull each one of them out as a set, and you would have the Burali-Forti paradox. (Nor can you properly capture the notion of cardinality as a set of ordered pairs, because of examples like this, so it calls for a more general notion of relation than a set of ordered pairs.)

Wittgenstein's approach is the first that identifies the real importance of equivalence relations, over the notion of reifying collections and declaring the collections associated to different objects identical.

The former is real, the latter is cheating. It is a shorthand that degrades meaning.

To pull it forward into more modern terms, for instance, we cannot say, in a ZFC sense, that 1 is the collection of all singletons, 2 the set of all pairs, etc. Some singletons are not containable. The collection of ordinals is singular, but it cannot be a member of a set. Nor can we say 1 really is {0}, only that {0} is our chosen representative of the cardinality of 1.

Not using equivalence explicitly, is not really consonant with the idea that not all collections are sets -- which everyone has to accept in order to avoid paradox.

The notion of equality is artificial, and needs to be avoided if your domain of application is not carefully circumscribed by a given equivalence dictated by the context (i.e. Real numbers as convergent sequences of rationals.) Logic as a whole is not circumscribed as a field in this way. There is no domain that classifies all the things we want to talk about.

Not the answer you're looking for? Browse other questions tagged philosophy-of-mathematics wittgenstein or ask your own question.

5
Exactly what was Wittgenstein's argument against identity?

7
A (possible) puzzle regarding John Lane Bell's "Abstract Sets"
2
What are the useful outcomes of denying the Continuum Hypothesis?
3
Is there provably a largest cardinal consistent with ZF
9
Why isn't Cantor's diagonal argument just a paradox?
6
What is the difference (if any) between the concepts of natural numbers and finite cardinals?
5
Is there a mathematical framework where both potential and actual infinity are used?
-2
Infinite Trolley Problems
0
What created the bias in humans that make us intuitively claim the refutation of the Continuum Hypothesis?
0
When does 'number' become 'quantity'?