Wittgenstein on ethics and the big book experiment 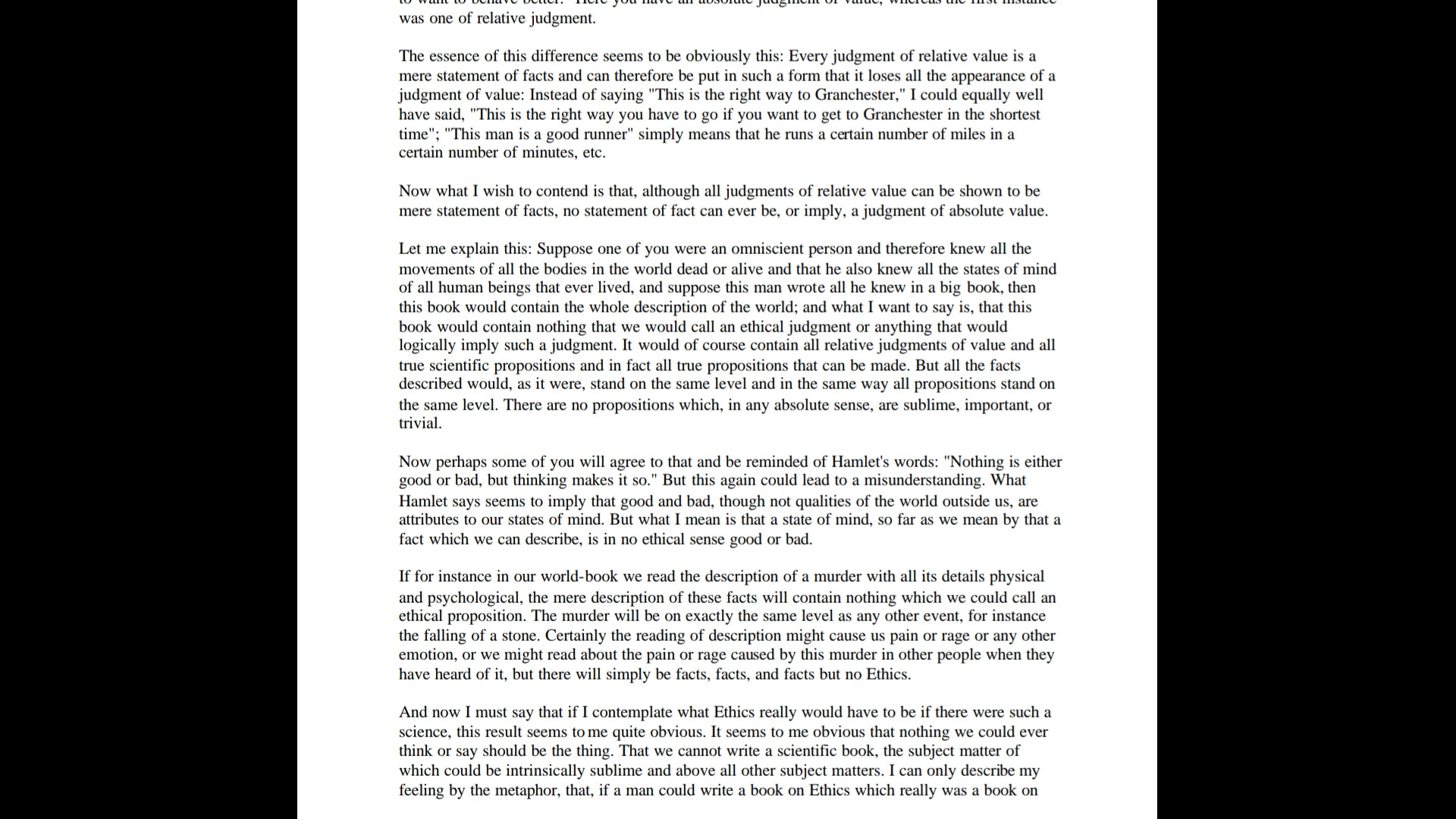 This is taken from the lecture Wittgenstein delivered on ethics.

Wittgenstein proceeds to establish a controversial position in ethics.

He clarifies this position by expounding a hypothetical big book which would contain all the facts, descriptions of the world along with propositions which are true. Even the statements that assign relative value. But in that book, we will not find any ethical statements.

The murder will be on exactly the same level as any other event, for instance the falling of a stone.

After reflecting on his position. I think it is really difficult to refute it. If I am not wrong, Wittgenstein fits in the school of non-cognitive philosophers in ethics. According to him, we cannot draw ethical implications from the facts of the world or find them amongst facts. Therefore, speaking of certain ethical statements to be true or false would be meaningless.

I have found two brief arguments against this view but they may not be convincing.

I think the world will never function on basis of non cognitive ethical theories yet l still haven't found convincing arguments against them. It would be great to see some good arguments and also some clarification regarding the position Wittgenstein takes since there is always a room for misunderstanding.

Traditionally, there are three kinds of absolute modal statements: statements about necessity and possibility; statements about obligation and permission; and statements about wishes (including counterfactuals, fictions and beliefs, on the basis that prefer to be right.) This is expressed in Lacan's three worlds, but it is also the most common classification of modal verbs or "real moods" for languages to have, and they enumerate a trope from traditional alchemy.

Ethics is entirely about obligation and permission, and Wittgenstein's book, here, would contain statements about necessity and possibility. Ethical theories largely consist, at some level, of axioms about how statements in other modes influence obligation. (Or about deductions a from such axioms a few steps long.)

Utilitarianism and other hedonisms are about how wishes affect obligations: if everybody suffers when you do X, you should not do X. Kantianism is about how obligations interact with possibility: if universalizing something is not possible, it is morally impermissible. Consequentialisms are about wishes for the future in particular and the possible variety of outcomes. Modernism injects that one should want/believe/pursue what is possible according to our current science and not want/believe/pursue what is impossible.

Clearly these axioms are not facts. Like all other axioms, we choose them to express our goals. And we only partly share those goals.

(So you can have your cake and eat it, too. You just need a modal structure that accommodates each of your contrasting arguments. Emotional reasoning is about wishes, and the consequences of morality are about social permission.)

That does not mean that we cannot compare ethical systems the way we compare scientific principles or mathematical axioms. The extreme modernist view of mathematics may be that axioms are arbitrary, but nobody believes that. We only pursue mathematical or scientific theories that accord with some underlying feeling that they will be beautiful or powerful.

Facts are not all there is. There is also human intuition, (inter-)subjectivity and shared perspective.

To use his examples... When we say someone is a 'good runner' — a statement of value — we can justify that by saying he runs at a certain rate of speed for a certain distance. For instance, I might say that Jack is a good runner, and back that up by pointing out that he can run a mile in six minutes. However, if I merely point out that Jack runs a mile in six minutes, we would have to import a large amount of extraneous information (average running speeds for people of Jack's race, age, and gender, for starts) merely to establish that Jack runs faster than other people as a rule, and then we would have to impose a standard which suggests that 'faster' = 'better'. Only then can we say that Jack is a 'good' runner. But note that this standard is purely conventional: not quite arbitrary, but established by consensus for a particular context and purpose, with no other logical or material basis.

Likewise, the material aspect of 'murder' is the killing of a human being; the deeply negative moral aspect is tied to the intentions and circumstances of the killer. Looking solely at the material aspects — the condition of the body, the weapons used, the details of the scene of the death — will tell us with precision how the killing occurred (that's forensic science). But we cannot determine whether it was murder, manslaughter, misadventure, or self-defense without importing a whole lot of extraneous information and conventional standards. For instance, in ancient Rome it was normal and acceptable for men with a grudge to fight each other to the death on the street, with long knives; passersby would stop and place bets. That would not have been considered murder. in the modern US we hold different standards, so the same behavior is considered murder.

This is really just an extension of Wittgenstein's 'meter rule' idea: i.e., that we can know something is a meter long by comparing it to the standardized meter-bar that was (at that time) stored somewhere in Paris, but we cannot 'know' that the standardized meter-bar is one meter long. We can only assert that it is one meter long (by convention) and proceed from there. He's not trying to suggest that standards (be they physical or ethical) are not real or valuable. He's simply saying that they are imposed on the world, not drawn from the world.

8
Should we not talk about ethics according to Wittgenstein?
6
How fatal is Rands error in tackling Humes is-ought distinction?
0
Is moral value intrinsic, or just non-accidental?
2
Can Empiricism and Ethics be linked via Neuro-Science?
1
Does later Wittgenstein think that the pragmatic test for meaning is a determinant of semantic content to the exclusion of any other determinant?
3
Absolute Rules in Ethics
3
Philosophy of Law, Ethics and Visualization
0
Wittgenstein - self and ethics in the Tractatus
4
What are the some of the most effecive arguments against stoicism?
1
Please explain Wittgenstein's views on ethics?