Two positions at once is logically impossible

Let's define the statements A and B as:

Then, from law of non-contradiction, this is impossible because A is A and A is not A at the same time. So one can't be at two places at once because it is logical necessary. Is this true?

I don't want to involve quantum mechanics. I just want an answer from a philosophical (Logic) point of view.

You are already presupposing that an object can have only one position at once by using the phrase "the position of". You could have said instead:

The positions of the object are x1 and x2.

There would be no contradiction then.

A mere logical analysis will not tell you whether an object can have more than one position. Especially not if you presuppose it from the start. It all comes down to what you mean by 'position', and I don't think it has a clear answer, at least not given our everyday use of this concept.

Suppose I am standing with my feet apart. What is my position? Is it where my right foot is? Where my left foot is? Is it the area of both combined? Is it the center of my body? Maybe it is the entire area I am occupying in space? In that case, if a position is a point in space, then I have many -- infinitely many -- positions. For other purposes a position may be defined differently, and then I might have just one position. Like many problems in philosophy there could be a lot of confusion if you don't first clarify the concept you are talking about.

An appropriate formalization (with natural language terminology instead of logic symbols) of your sentences in a language of predicate logic with term equality =, a function symbol pos, a variable y for the object and two variables x1, x2 for the two positions is

Your usage of "the position" justifies the translation as a function expression that has exactly one value. One could question now whether or not "position" is indeed something that behaves as a function -- this may be more of a question for physics than for philosophy, and if the answer is no, then already the initial wording of the situation would have been inadequate and the conclusion will not be provable with the methods used here. But for the sake of demonstrating from a logical point of view how a semi-formal proof can be carried out with the premises as you worded them, as per your request, let's assume that this formalization is indeed adequate.

The set of premises is not immediately contradictory: To be able apply the law of non-contradiction, which states that not(P and not P), one of the two and-ed statements in S1 would have to be the direct negation of the other, so that S1 has the form P and not P; but pos(y) = x1 and pos(y) = x2 are just two independent formulas that are not immediately visible as contradictory.

So if we want to prove the argument rigorously, we need a few additional inference steps. The idea will be that if we have equality statements =, then we are free to combine any of the terms between the equality symbols, which eventually leads to the observation that if the first assumption is true, we must have x1 = x2, which contradicts the second assumption that x1 and x2 are different positions.

More precisely, we are exploiting the following two properties of equality:

In addition, we need

With these rules, we can prove the validity of your argument formally:

Note that the contradiction arises not between the two position assertions, but between not (x1 = x2) and (x1 = x2), the latter of which is derived from the assumption S1.

If we are convinced that the initial formalization of your situation is adequate, and accept the individual inference rules, then the above reasoning indeed proves that the object can not be at positions x1 and x2 at the same time. The key of the proof lies in the implicit assumption that "position" is indeed a function, in the sense that every object can only have one position, so that we can use = and argue about how equality works.

We can now actually go a step further. Up until now, we only proved that the set of premises given, with the concrete positions x1, x2 and object y is inconsistent. But we may want to prove something more general:

To do this, we need two more inference rules:

At this point, conclusion 9. does no longer depend on any assumptions about y, x1 and x2: The second premise S2 is discharged because we now said more generally that if not(x1 = x2), then not (...), which no longer depends on whether or not not(x1 = x2) is actually true. And the first premise S1 was discharged in line 8. where we concluded that this assumption must have been wrong since it led to a contradiction. So y and x1, x2 are indeed arbitrary objects and positions, the conclusion does not depend on what exactly these variables look like, so the proof should work for any object and positions. This is why we are allowed to a final universal introduction:

We now formally proved that for all objects y and all positions x1, x2, if x1 and x2 are different, then the position of y can not be x1 and x2 at the same time.

I just wanted to comment on a common source of confusion..

A person can stand in four different US states at once by going to Four Corners: 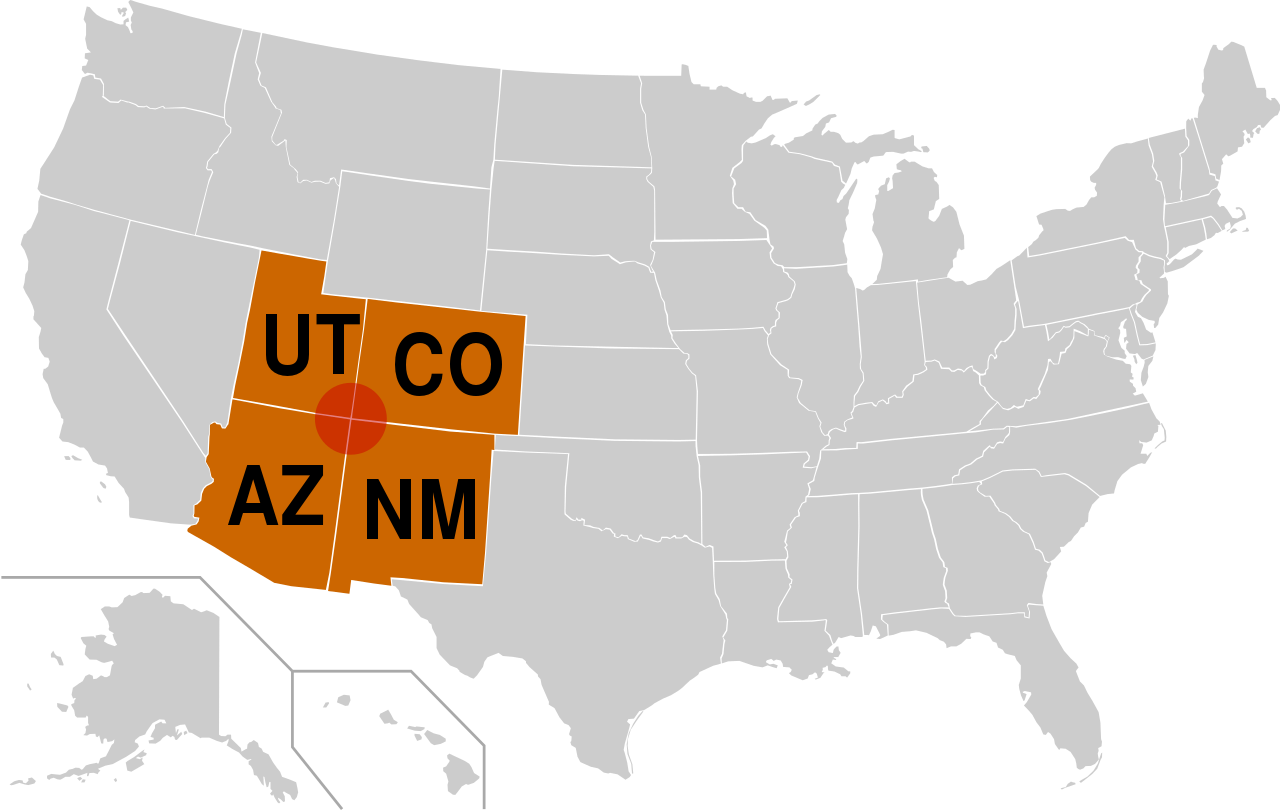 The states are Colorado, Utah, Arizona, and New Mexico.

So say Alice is at Four Corners. Here're some example arguments:

The fallacy I wanted to point out is that some folks would think that state(Alice) could have different returns; but, it can't if it's supposed to return the states Alice is in. If Alice is in multiple states, then the return shouldn't be one of those states, but all of them.

Regarding false descriptions of multiple positions in quantum mechanics

Okay, regarding quantum mechanics: one of my pet-peeve fallacies is that folks often think that Quantum Mechanics is somehow so outside of reality that it's even an exception to logical reasoning – which is just plain silly.

I stress this because I want to be clear that, if someone says,

But particles can exist at multiple locations in quantum mechanics!

, this could very easily be mistaken (by the speaker or/and listeners) to mean something incorrect. It's probably best to just disregard such statements as being loose with words.

The very first sentence of the relevant Wikipedia article fixes this misconception:

In theoretical physics, quantum nonlocality refers to the phenomenon by which the measurement statistics of a multipartite quantum system do not admit an interpretation in terms of a local realistic theory.

This is, a nonlocal entity isn't a local entity that's duplicated in multiple locations or something else like that; rather, it "do[es] not admit an interpretation in terms of a local realistic theory".

For example, say that in the examples above, the function state(Alice) couldn't return an ensemble of states; it had to return only 1 state. Then, when Alice is standing at Four Corners, state(Alice) shouldn't return at all; Alice's position doesn't "admit an interpretation in terms of a being-in-a-single-state theory".

Anyway, I rant about this because the question statement started with

The question is first (implicitly) asked by Zeno, in his attempt to understand the nature of what constitutes change in the phenomenonal realm. Aristotle offered an answer in terms of potentiality and actuality in both his Physics and Meta-Physics, which you might want to look at.

Not the answer you're looking for? Browse other questions tagged logic philosophy-of-mathematics or ask your own question.

3
Is illogical = not logical?
2
How to interpret “it is possible that x is impossible”?
2
Has anyone ever argued that the laws of Nature and physics are necessary truths?
11
Has quantum mechanics destroyed the fundaments of logical reasoning?
5
Is symbolism necessary in mathematics?
5
What happens if we accept inconsistency?
4
Did anyone argue against the possibility of a perfect prediction from within a system?
0
What is an example of a true contradiction in a paraconsistent logic?