David Armstrong's theory of universals is sparse: it's "mass", "electric charge", etc. that are true universals, not e.g. "redness".

In pre-modern times this might be vaguely comparable to the classical elements, Earth, Water, Air, Fire - in the sense of: If there are any universals (nominalism is false), at least those must be.

There was also a further simple "grouping" (?) of classical elements into sensible qualities by Aristotle: "hot", "cold", "dry" and "wet". 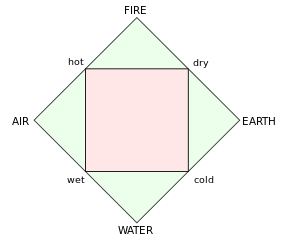 So we get the universals hotness, coldness, dryness and wetness.

But there is a problem here: How can those be more than predicates (mere expressions that can be true of something)? Dryness is "reducible" to the Earth and Fire universals: Dryness is present in a particular iff Fire and/or Earth predominate in it.

And analogously we can invent a combination like of Air and Earth, or, of Fire and Water, which do not give us "sensible qualities".

Presumably "Earthairiness" or "Firewaterness" is not eligible to be a universal. But what makes it so?

So there is a problem of distinguishing between a predicate, that results from a mere logical (conjunction, disjunction, ...) combination of universals (or a more complex description of how a particular is), and true universals in their own right.

Since the problem of universals stretches from Aristotle to Armstrong, is there a set of "standard solutions" to answer this?

A theory of universals is a hypothesis about the metaphysics of our universe. It is not established analytically, but empirically, because yes, there could be a completely different set of "universals" as you noted. So the validity of a "universals" theory is established by its success in accurately describing our universe. Aristotle's theory did not work out well. Armstrong's does not sound like it will do much better in the face of quantum mechanics, where particles have no mass at energy levels above the energy where the Higg's boson precipitates out. Mass would not be "elemental" per modern physics.

Not the answer you're looking for? Browse other questions tagged metaphysics history-of-philosophy or ask your own question.

5
Why didn't Thales say the water is principle of matter, but the originating principle, according to Russell?
7
Universals vs. Facts
2
Did Aristotle know that Moon revolves around the Earth?
4
does exclusion + supervenience + pairing necessitate reductionism?
2
Was Aristotle aware of any counterarguments based on data to his aether theory?
4
Reductionism and Parmenides
1
What is the origin of the symbols for the four elements used in alchemy?
0
On Universals and Particulars