I am not looking to stir up anything, but is an electron an essential object?

To answer this question, it may first be beneficial to ask "Is a brick an essential object?"

Inspired to post my answer after I read Moziburs:

If whatever is essential is also necessary: No, electrons dont exist necessarily. There is a possible world consisting only of gunk, no electron is member of the world (see Ted Sider: Van Inwagen and the Possibility of Gunk). For more gunk, see SEP on Monism.

Reading essential as fundamental, according to some: Yes, the electron has no proper parts and therefore is essential. (It might still be possible in the future to divide it into some other stuff, which makes that stuff fundamental)

According to some others (e.g. Schaffer): No, the only fundamental thing is the world.

This looks suspiciously like something from an anecdote of Feynman from one of his popular collection of raconteuring tales to be told round a barbeque with a crowd of admiring physicists-in-waiting.

Now, an electron is an essential object in modern physics; but no physicist will refer to it in that way - the usual terminology is a fundamental particle. It looks similar, but it isn't - as both these terms fundamental AND particle have certain meanings within the discipline of physics that one imbibes as one studies the subject.

Essence is something that was begun to be discussed in antiquity - it has a long history that I'm not acquainted with. I imagine it is this tradition that feeds into Whiteheads book. To understand why he is interested in this - one should look at the tradition so that the term has some meaning.

Now, a substance is neccesarily self-subsistent.

Hence a brick is obviously not a substance.

But is an electron? If we consider it to be fundamental as in QFT, that is atomic then it appears possibly yes. But this actually cannot be correct for do we not require spacetime for it to be in? So, no; it is not a substance.

But suppose QFT is only an approximation to String Theory. Then strings are fundamental and electrons are not - they are vibrations of strings. Strings are not atomic since a string can always be split given enough energy - that is it is infinitely divisible. But they are neccessary to build matter. But are they self-subsistent? No, they are not. For they also require space-time. So, even in this theory they are not substances.

Now suppose there was a hypothetical theory in which spacetime & electrons were vibrations of let us suppose of strings. Then are they substances? I think this time yes. For I can always imagine fewer strings, or just a string by itself. So, here strings are substances and are primarily essential. But, still an electron being a vibration of a string is not primarily essential.

When particle physicists say that a certain particle "exists", they mean: we can prove statistically that there is (with a certainty of 99.x%), this and that relationship between the following measurements. In our framework for explaining the world (the standard model), we express this as a particle with the properties X, Y and Z.

There is no reference to substance or essence in these statements. Substance and essence are metaphysical properties, which are in a different category from physical observations. In the early 20th century, with the advent of relativity theory and quantum theory, physicists experienced the shock that basically everything which they had assumed to be fundamental laws of nature needed to be revised and changed, because it proved insufficient to explain what they saw from the world.

Of course, still today physicists like to believe in their models as "true", i.e. describing a fundamental, objective reality of nature. But in fact they are merely "useful", i.e. they allow to predict results of actions and create a certain pleasing way to sort and categorize what we observe. But, if physicist were confronted with a new and radically different model, which explained things which were so far unexplained, or which would arrive at the same predictions with significantly less effort, they'd be bound by scientific ethics to abandon their old model and adopt the new, as they did e.g. with the attempts to describe atoms within classical physics.

In the light of this, and expecting that science doesn't stop to progress, it would be, in my opinion, premature and careless to attribute "substance" or "essence" to any "physical" object. It might always turn out to be an artifact of the physical model, like e.g. "ether", the hypothetical medium of electromagnetic waves which was abolished by relativity theory.

Behold, in the left-bottom corner, in the green trousers, the electron: 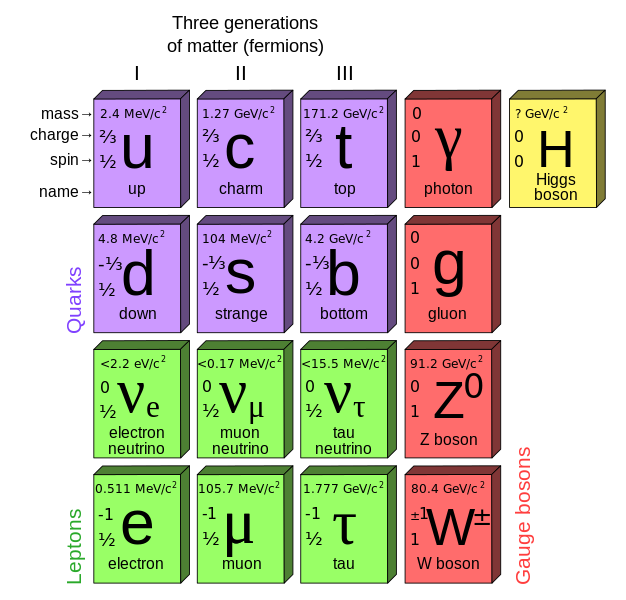 I'll skip over the fact that one can see an electron as an excitation of an electron field (which, I believe, is what the Standard Model technically does).

However, the Standard Model may/might/should/can/will/is/whatever not be the end-point. That's why there is a Wikipedia entry for Physics beyond the Standard Model. For example, "[i]n string theory, the different types of observed elementary particles arise from the different quantum states of these strings." That may suggest that the string may be the "essential object" (whatever that might mean), and not specific states of it. On the other hand, if an electron is a string and if a string is an "essential object", then so is an electron (but one of many).

Gordon Kane, Supersymmetry and Beyond, p. 122

Any object made of other objects is composite, as are atoms, nuclei, and protons. If quarks and leptons [e.g., the electron] had followed the historical trend that each level of matter turned out to be composites made of smaller constituents, experiments [presumably after the Feynman brick episode] should already have shown evidence of their compositeness. That, combined with theoretical arguments, strongly suggest quarks and leptons may be the ultimate constituents of matter, the indivisible "atoms" of the Greeks.

Gordon Kane, Supersymmetry and Beyond, p. 158

Anyway, beyond the Standard Model is work in progress.

Not the answer you're looking for? Browse other questions tagged essence or ask your own question.

4
Is it useful to say that weak essences exist?
6
Deleuzian finitism and Spinozian infinitism
2
How can “essentialism” ever make sense?
2
Does Spinoza's God have an essence?
3
What exactly does Spivak mean by strategic essentialism?
7
How can Marx be a materialist yet still speak of a human “essence” in his theory of alienation?
4
Sartre on essence