I'm trying to brush up on French and found this on the ne explétif. But I can't understand anything to the left of my red line, like this part? Can someone explain like I'm 5?

What's "the subject of the signifier"? I can't compare "enunciation versus utterance" when I don't know what "enunciation" and "utterance" mean here!!! "as a subtle indicator of how it positions itself with respect to the meaning of the signifying content uttered."???? What the heck?

By contrast, Lacan, having carefully distinguished between the two sides of the subject of the signifier (i.e., enunciation versus utterance), maintains that the occurrence of an instance of the ne explétif in a sentence signals a moment in which the subject of enunciation brings itself into view through the ne as a subtle indicator of how it positions itself with respect to the meaning of the signifying content uttered. 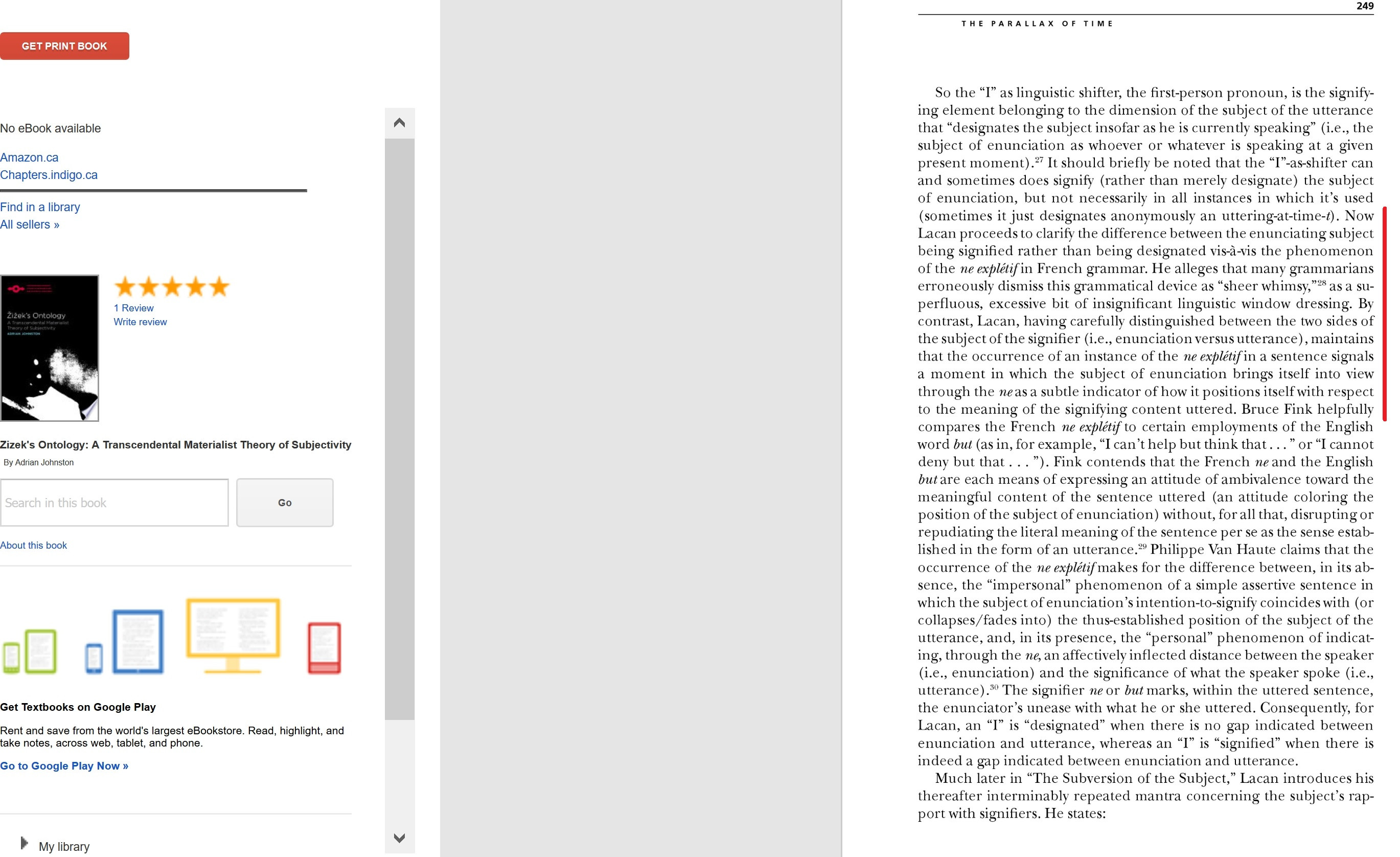 Lacan, as a psychoanalytic theorist, is concerned with understanding us humans in all of our psychological complexity, and not simply for intellectual curiosity, but to help specific individuals with their specific impasses in a way that works not just for you or for me but hold across all individuals. In order to do this, and to bring to the surface useful analytic tools and frameworks, he has to spend a great deal of time in the details. Of our actions, our statements, our utterances and enunciations, all with the purpose of seeing the ways in which we project our ego, all the ways in which we hide that which we don't want to be seen, all the things that arise that demonstrate novel innovations of thought in an individual etc. I've not read Johnston's book on Zizek, so I'm not sure what all he mentions about Lacan, so I'm merely setting the scene to answer your question in the most general way possible with respect to Lacan himself, not what Zizek does with him.

The "ne explétif" is something Lacan hones in on at a certain point in Écrits in commenting on Sigmund Freud's use of the term Verneinungssymbol - cf. Freud, Die Verneinung) as vacilating between positive and negative judgements. The psychological event of negation would, according to this interpretation of the Freudian framework, be discernable by a word like "not". But Lacan noticed that there are a lot of negations which do not contain a "not". And by the same token, there are a lot of propositions that, although containing a "not", are not negations. He also notes that in Freud himself in case studies of paranoia for example, there's never really this black-and-white binary understanding of negation.

In French grammatical terms, the "ne explétif" is like a "no" or "but" that does not add any meaning – negative or otherwise – to a sentence; it’s just there to draw attention to what precedes it. The example Lacan uses in Écrits is “Je crains qu’il ne vienne” which is in English "I'm afraid he's coming". Grammatically it sounds odd to a speaker of English that it contains a "no" that doesn't actually change the sense of affirming in the sentence, but it has the same effect of using "but" in a sentence to give a more formal expression of uncertainty or doubt without it ever being explicit.

Now, Lacan is not interested in this "ne" for grammatical purposes, but what he sees as a psychoanalytic and philosophical significance vis-a-vis our understanding of "negation". He posits that the key feature of negation has to be found elsewhere than in the "not". Rather he sees it in the split between two levels of speech (the speech of the "subject of enunciation" and the "subject of the utterance".) If I were to just quickly and somewhat reductively distinguish these two levels, it;s between the "I" as it is conscious to oneself and the "I" that exceeds your own consciousness of yourself but which is viewable to any subject that makes your "I" the object of distinct scrutiny. He's saying that negation is not at the level of the "subject of the statement"'s "not". There's negating occurring that is never completely conscious to that "subject".. that "I".

The subject of enunciation is representable by what in Freudian terms would have simply been called the unconscious you. The subject of the utterance is the you that speaks (utters) statements that you want to be taken at face value.

To use a Wittgensteinian example that I've seen used to elucidate how Lacan's point can be understood, in "On Certainty" Wittgenstein gives the example, of somebody who uttered to a friend during their conversation a proposition like "I have all the time known that you are N.". This proposition, at the level of enunciation is extremely unclear because it would not be understandable why it was uttered at all. The "background" of the message was "missing", as Wittgenstein noted: it was not clear why the situation should make such an utterance necessary. Assuring the friend of something which was beyond any possible doubt immediately signals the contrary: that there exists a reason to doubt, hence necessitating such an act of "assurance". The foreground (in Wittgenstein's terms) of the message negates the supposed undoubtability of its background. So, in Wittgenstein's view this type of doubting, and acts of affirming certainty, operate between "foreground" and "background", or, in Lacan's terms, between the level of the enunciated and that of enunciation.

So, ultimately, what you should take away, when you see the "ne explétif" invoked is a sort of loose thread (imagine a shirt that has a lose thread that if you pull on it unravels more of the shirt than you would probably want) is lack of certainty invoked by this distance between what (the content of what) someone says and what's really going on with the subject (or "I") speaking.

Okay, first, let's tackle the fact that you are dealing with three distinct vocab issues:

And also, you might be short some background information about the nature of Cartesian duality and various ontological positions regarding it. I don't know if you're familiar with the distinctions of subjectivity, objectivity, and intersubjectivity. In short, under naive realism, one takes a metaphysical presumption that there are material and abstract ontologies or domains of discourse and then tries to understand how and if they relate. In fact, this wrestling with dualism is one of the central themes of Western philosophy going back to the Pre-Socratic Greeks.

Remember, the important thing here are the skills at play, some of which only come from studying philosophy. For instance, familiarity with German idealism, Gottlob Frege's antipsychologism and founding of the analytic tradition, and then Freud's revolutionary psychoanalysis might help you to see some themes and ideas at play. (I'm fond of the Hegelian dialectic.) If you're finding philosophy difficult to read, pick up an intro text and an intro history and read those first to get some bearings. Philosophy extends back from Anaximander and his ilk to current philosophers who have been wrestling with many of the same questions for 2,000+ years.

Also a book on introduction to linguistics will help shed light. I have an older copy of Linguistics for Non-linguists: A Primer with Exercises which is a good basis to understanding how language works including looking at phonology, pragmatics, grammar, etc.

Now, on to your specific question:

A signifier is a symbol that stands for something that is signified. Hence the word 'cat' is that which stands for a cat. It needn't be 'cat' as 'gatto' in Italian accomplishes the same feat. It's related to Ogden and Richards' ideas in The Meaning of Meaning, particularly 'symbol', 'reference', and 'referent'.

As for 'ne explétif', we are dealing with a sound that is not an independent word that adds meaning or semantic content to a phrase. In French, 'Je ne suis pas un poisson' means 'I am not a fish', and here 'ne + verb + pas' functions to negate the verb. In 'Évitez qu’il ne vous voie', 'ne' adds emotional overtones of being bad or fearful. In English, we might use a phrase or another sentence. There's a difference between 'Don't let him see you' and 'I swear to God, don't let him see you, or you'll be sorry', the latter communicating urgency. The French do it with 'ne' according to the rules listed in the citation above.

As for the difference between 'utterance' and 'enunciation', in common parlance, an utterance is anything said and refers to the objective, phonological nature of language. 'Whoooooooa!" is an exclamatory utterance, and 'I'm here' is a declarative one. One pronounces those written words in a particular manner, and if one does so well, one is enunciating. So, understand the difference between pronunciation and enunciation first. But as is often the case, philosophers often repurpose ordinary language with technical meaning. Now, we are in a position to unpack Zizek's text!

"Lacan, having carefully distinguished between the two sides... enunciation versus utterance... that the ne explétif... signals a moment in which the subject.... brings itself into view.. of how it positions itself with respect to the meaning..."

This is later born out where Zizek writes:

where that gap (difference) between the act of enunciation (signified) and utterance (designated) is nothing more than describing whether a proposition is normative (uttered, designated, subjective) and positive (signified, enunciated, objective). Think about it in English. There's a fine distinction between:

Now, I more fully see your struggle with vocab. To improve your philosophical reading comprehension, you need to expand your skills in dealing with the historicity of philosophical terminology, your understanding of linguistics, and your ability to use references independently of others to arrive at these sorts of conclusions. This is NOT an easy task. It's work, work, work! There is no golden road to philosophy.

Not the answer you're looking for? Browse other questions tagged lacan or ask your own question.

9
Who is the Big Other, and is there a little Other?
5
Were Derrida, Lacan, Freud involved in politics?
1
Researches on 'Ontology of the Subject' with a focus on Lacan
1
What does lacan mean when speaking of 'subject'
2
Some examples of what lacan calls 'subject'