In Thus Spake Zarathustra what does Nietzsche mean by saying "are thine own desires 'neath a thousand guises"?

In The Song of Melancholy, chapter LXXIV, in Thus Spake Zarathustra, there is a section that says:

Are the poet’s desires, Are THINE OWN desires ‘neath a thousand guises,

Is this a rhetorical question saying that poets do not explicitly say what they desire?

"Self-hiding," in this case, is a weakness. Nietzsche values the will-power to be unabashedly direct over trying to conform (by hiding true desires that may be controversial).

It sounds like your question might be part disagreement with these ideas/themes, rather than just trying to understand them on their own terms. I mean, it sounds like you get what he is driving at, and your questions are a way to soft pedal a statement (dressed as a question).

I find it helpful to try to separate my understanding and my disagreeing when they get muddled like that. It makes them both clearer.

"Are the poet’s desires, Are THINE OWN desires ‘neath a thousand guises? 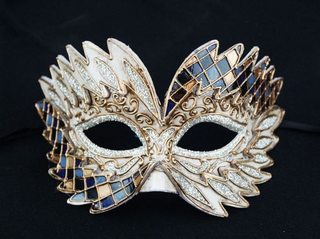 Note that statement 2 is often more persuasive than statement 1. That rape is "wrong" is not true according to Nietzsche, but is usually more persuasive, than just "please don't rape me, I would rather not have sex with you."

As such, all statements about ethics and morality are really just statements of personal preference in disguise.

In Nietzsche's view of the world, people hide their personal desires using many different masks.

All claims about morally are personal preferences painted to look like something else. When it comes to ethics, people portray their own personal preferences as if they were laws of physics written into the very fabric of the universe. "I would prefer to not be physically forced to have sex," becomes things like, "The very fabric of the universe will dislike you extremely if you rape a another person."

You asked, "what is wrong with self-hiding and putting a desire in a disguise?" The answer is that Nietzsche is passionately in love with the pursuit of truth. Nietzsche wanted to try to be as truthful as possible, and wanted other people to try to be as truthful as possible. Confusing your personal desires with the laws of physics governing the universe is something that disgusted Nietzsche. He was personally disgusted by deceptions and obfuscations of truth. If you, also, are a lover of truth (most philosopher's are), then you might be able to see why Nietzsche abhorred such things.

Not the answer you're looking for? Browse other questions tagged nietzsche or ask your own question.